for language throughout, some sexuality and brief violence. 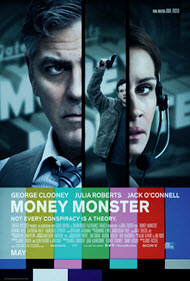 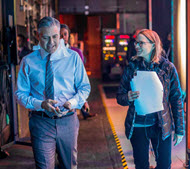 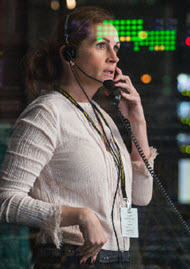 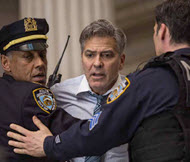 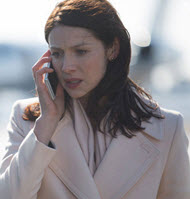 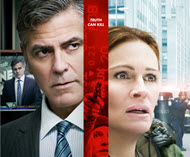 Lee Gates (George Clooney) is known by all his financial viewers as the “stock market expert” of television, through his popular (yet, somewhat unorthodox) television series “Money Monster,” providing financial stock market analysis to potential investors.

While filming a live episode of “Money Monster,” Director Patty Fenn (Julia Roberts), notices a strange deliveryman in the corner of one of the set pieces. He suddenly appears onto the main stage, walks closers to Gates and draws a gun, firing it in the air.

After strapping a bomb to Gates, the assailant known as Kyle Budwell, tells Gates and the audience he took financial advice from Gates to invest in a company called IBIS. Through a series of mysterious circumstances, IBIS stocks plummeted (IBIS, in total lost $800 million). One of these stockholders included Kyle, who invested everything he had, which was $60,000.

Kyle wants answers, and Gates does as well. How did this happen? Who or what is responsible? The clock is ticking…

To be perfectly honest, I was skeptical as to what I was about to witness with “Money Monster.” I found myself asking, “Is this movie going to fall more toward a thriller, an action flick, a suspense, or a combination of everything?” as well as, “Am I going to be able to follow everything, or will I walk away with more questions than answers?”

Simply put, “Money Monster,” I feel falls between thriller and drama. It is “psychological” thriller, as the audience wonders, “Okay, Kyle is about to break any minute… Is he going to detonate the bomb?”

Speaking of psychology, I found the dialog and content of the movie to be confusing, due, in part, to my lack of knowledge of the stock market industry (other than some basic information). Did this depreciate the value of this film for me? Not to a great extent.

I was still able to follow the overall plot of the film and the overall motive of the main antagonist. I have to say there were some genuine moments that did surprise me, particularly toward the end of the film (no spoilers).

With regards to performances, George Clooney remains at the top of his game, once again. He is a master of switching personalities in an instant. As Gates, he provids moments where he’s overconfident, sarcastic and egotistical, but also moments where he is sentimental, genuine and kind. Julia Roberts also provides a decent performance, yet she felt underused (which was sad, as she is an incredible actress).

Violence: At the beginning of the film, Kyle walks on set and shoots his gun in the air. A character is shot and killed. Two other characters are shot at (one is killed, the other is not).

Sex/Nudity: A reference is made to a “certain cream.” Another reference is made to “balls” using “basketballs” (slight joke). Gates uses a graph on television and uses a pen to draw what appears to be women’s bare breasts. Two station workers are seen having rough sexual intercourse in a closet. A couple is seen taking a shower (nothing graphic is shown). A couple bathroom scenes are also shown.

If there is one moral that can be drawn from this movie, it is that we cannot simply rely on wealth and our money to provide for our necessities. Of course, this seems so obvious when you read this, but, in reality, think about the power and influence money has in our society. Even when we have the necessary amount to live on, often we want more. Jesus warns us…

No one can serve two masters. Either you will hate the one and love the other, or you will be devoted to the one and despise the other. You cannot serve both God and money. (Matthew 6:24

And since money is considered an idol:

You shall not make for yourself an image in the form of anything in heaven above or on the earth beneath or in the waters below. (Exodus 20:4)

Likewise, we must fix our eyes on Him to provide for our needs. He is the ultimate provider. The world will fail, but, I can guarantee you, He will not.

While I might not be the right audience for this film (as at times, the financial aspects tended to confuse me), that does not mean I wouldn’t say that with some serious editing of content, elimination of sexual content and excessive language, that it wouldn’t be worth seeing. As it stands though, I don’t recommend it to Christians. Please see something else.

Negative
Negative—Simply put, I found the story very poorly written and not well directed at all. The power team of George Clooney and Julia Roberts, for whom I went to see this film, did their best with their roles, but they could not save this thriller. The movie is a thematic hodge-podge of stories about financial corruption and conspiracy theories and the divide between the rich and the poor, to name a few of the many subplots. The main story was mostly implausible. I read some positive reviews by both Christian and secular critics, but I cannot agree with them and personally found the movie annoyingly stupid.
My Ratings: Moral rating: Very Offensive / Moviemaking quality: 2½

Colin Covert, Minneapolis-St. Paul Star Tribune
…Cross “Dog Day Afternoon” with “The Big Short” and throw in a dash of “Network” and you’ve got “Money Monster,” a clever financial thriller with comic overtones that’s a solid investment of your time…

Todd McCarthy, The Hollywood Reporter
…George Clooney goes Leslie Nielsen in popcorn hostage thriller… A miasma of pure silliness settles on this movie… it deserves a genre of its own: screwball action… [3/5]

Michael Phillips, Chicago Tribune
…Soft at the center, “Money Monster” is rough around the edges: a foolishly lewd production assistant; a smug hostage negotiator; clueless cops who come up with a silly plan; bad New York accents that afflict many in the cast…

Joe Morgenstern, The Wall Street Journal
…When you break apart the essential elements of “Money Monster,” Jodie Foster’s taut yet sporadically odd hostage drama, few of them seem to completely work. As an indictment of Wall Street chicanery, it’s largely toothless; as a pure thriller, it only quickens the pulse once or twice; as a conspiracy saga, its central mystery falls flat. Yet somehow the film hangs together surprisingly well…

Andrew Barker, Variety
…George Clooney and Julia Roberts get mauled by “Money Monster”… a film that is both less entertaining and less significant than it imagines. …