for some rude and suggestive humor. 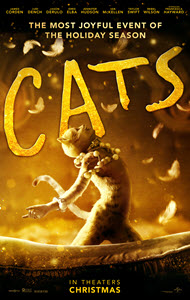 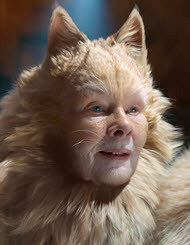 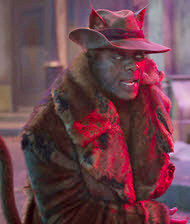 The fantasy idea that cats can have multiple lives

The Modernism poetry of T.S. Eliot

What is LOVE—a feeling, an emotion, or an action? Answer 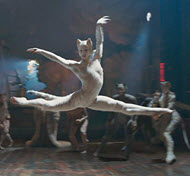 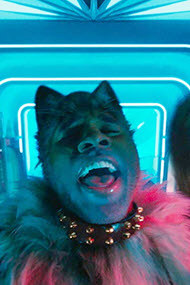 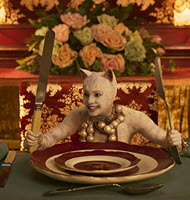 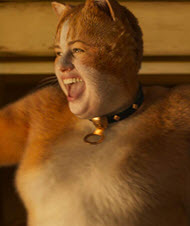 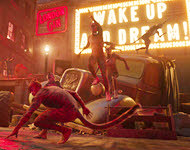 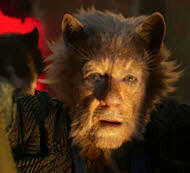 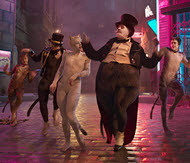 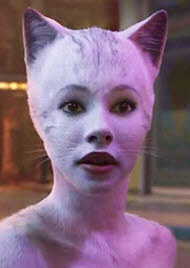 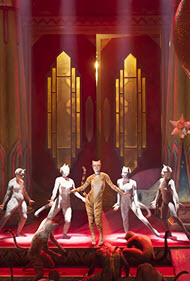 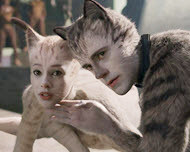 When I was a teenager, I saw “Cats” on Broadway. It was a wonderful performance where the actors came off the stage and touched the audience. I must admit I was intrigued as to how they were going to make a movie out of it.

The story is about a new cat who is thrown into an alley. The tribe of Jellicle cats brings her to the Jellicle Ball. The purpose of the Ball is for the old and wise cat Deuteronomy to pick a cat to go to Heaviside Layer. If you get chosen, you go and you are given a new body. It sounds like they are going to Heaven. Each cat sings about themselves and why they should be picked to go to Heaviside. This is the entire plot which all takes place in one night on the streets of London.

In the simplest form, the movie “Cats” is the onscreen adaptation of the Broadway musical. The stage show had no plot to it, and the movie version also offers the same. It is the exact same songs. The primary difference from the stage version is a new song (that Victoria cat sings) and the sex of Old Deuteronomy. Old Deuteronomy used to be played by a male actor. Judi Dench (a woman) plays the film role. For me, this did not take away from the story (or lack of one).

The costumes are combined with CGI to make the cats. They look like people in cat suits. The CGI makes their ears move and their tails stick up or down. On Broadway, the costumes gave life to the show. The actors coming into the audience was different and unique for the stage, but you cannot get that look and feel on the big screen.

I see “Cats” the movie as similar to a human “statue” one might see in the New York City subway. It is beautiful art to see them painted in silver and standing perfectly still looking like a statue until it moves. It draws a huge audience, but it would be very boring to look at that on a screen.

Overall, the movie is about cats introducing themselves, singing and dancing at a ball—with no true storyline and almost no talking. Even though it is an all-star cast, the new comer Francesca Hayward who plays Victoria is the most memorable. She performs a ballet piece with the elegance of a swan and the charm of a cat. She sings the new song Beautiful Ghost which was written by Taylor Swift and Andrew Lloyd Webber. Francesca is a part of the London Royal Ballet. The whole story is basically seen through her eyes.

The movie’s dancing is poetry in motion. The irony of this statement is “Cats” is based upon a children’s book called Old Possum’s Book of Practical Cats by poet T.S. Elliot. A large part of his poems are used in the story. For me, it is just hard to see why they decided to make a motion picture about nothing from a stage show that was about nothing.

There are one or two suggestive situations where one cat looks as if she is making sexual gestures, but one could imagine a cat doing moves that way also. Certain scenes might be considered sexual or sensual, but a person could miss it. The costumes are very form-fitting, and it is apparent that some of the females have breasts, but there is nothing explicitly revealing. There is no nudity and no vulgarity of concern.

Taylor Swift’s character Bombularina sits on top of a moon and sprinkles catnip on the other cats. Catnip has been known to get cats “high” like marijuana. So, this is a drug implication scene.

Positive
Positive—My wife, who is a Christian like me (but who attends church more regularly than me!) saw Cats and loved it (I told her to see it before it disappeared). I think most peoples’ problem with it, is that they are unfamiliar with the stage musical and are judging it without foreknowledge. She says James Corden was brilliant but that Judi Dench and other ‘name’ actors didn't have very much screen time. There was a big tap dance number, which she said was brilliant (she used to do tap dancing, as does our son—I used to, but kept falling in the sink!). So don’t believe the negative press—I trust my wife’s judgement—although not many song and dance musicals are my cup of tea, don't be put off by the majority. You might miss out on something enjoyable.
My Ratings: Moral rating: Average / Moviemaking quality: 4

Dirk Wickenden, age 52 (United Kingdom)
Positive—Who knew that Ian McKellen could sing so well? His is one of the better performances in this mixed bag of cat calls. A few were not so good. Francesca Hayward carries the movie well enough and the new song co-written by Taylor Swift is nice. I also liked the additional tap and ballet sequences. I saw the original show on stage in the 80’s and was mesmerized. The stage version DVD is better than the movie because ALL of the performances are great. So how did they make such a beautiful musical turn out to be less than what it could be. I will tell you. They threw in some roaches and inappropriate crotch humor to begin with. Then broke up a song or two with unnecessary dialogue. I would also like to have heard the talented Jennifer Hudson just sing Memory straight. This song could be a show stopper. Sometimes you can show too much emotion in the delivery of a song. (Sorry Jennifer. I am still a fan.)

This only gets a marginal paws up for me, mainly because of Andrew Lloyd Webber’s wonderful score. The music alone is worth the rental! It is definitely not a dog but it failed to make me purr.
My Ratings: Moral rating: Average / Moviemaking quality: 3

Jeff Leslie, age 63 (USA)
Negative
Negative—I should have read the reviews before I went. CGI can’t hold a movie. It was slow. It was dull. Very disappointing. The feline is a majestic creation of God. There is always trouble when you humanize God’s creations and make it asexual. Swift’s brief 5 minute performance helped give this movie the 1 star. Jennifer Hudson is a great singer. Her potential was suffocated in this movie.
My Ratings: Moral rating: Average / Moviemaking quality: 2

Louise, age 60 (USA)
Comments from young people
—This movie was trash. The only thing that saved this was Taylor Swift.
My Ratings: Moral rating: Good / Moviemaking quality: 3½

Secular Movie Critics
…Hayward is the very best thing about “Cats,” a movie that, like cats themselves, is otherwise filled with contradictions. “Cats” is terrible, but it’s also kind of great. And, to cat-burgle a phrase from Eliot himself, there’s nothing at all to be done about that. …
Stephanie Zacharek, Time
…much of it is a cheesy, B-grade affair seemingly crafted solely to take over midnight-movie slots from “The Rocky Horror Picture Show.” Those with an open mind, though, as well as little kids and the T-Swift posse, might find it somewhat pawesome. … [2½/4]
Brian Truitt, USA Today
…An individual’s appreciation of “Cats” may rest on a previous love of the stage play; others are more likely to throw up a hairball than purr in contentment. …
James Berardinelli, ReelViews
…Please wipe this movie from my “Memory.” …a total disaster… [1/4]
Johnny Oleksinski, New York Post
…It’s a dog. …Is it the worst film of 2019, or simply the most recent misfire of 2019? Reader, I swear on a stack of pancakes: “Cats” cannot be beat for sheer folly and misjudgment and audience-reaction-to-“Springtime for Hitler”-in-“The Producers” stupefaction. … [0/5]
Michael Phillips, Chicago Tribune
…a CGI nightmare… galling CGI intended to cover the actors in head-to-toe feline fur. Instead, the animation detracts from the film’s capable performers and inventive surroundings, drawing the eye reluctantly in like the sight of a person vomiting in the middle of an amusement park. It makes for a slow death, so overwhelmingly grotesque that it ceases to be interesting at all. …
Lena Wilson, The Playlist
…The only realistic way to fix Cats would be to spay it, or simply pretend it never happened. Because it's an all-time - a rare and star-spangled calamity. …
Tim Robey, The Telegraph [UK]
… slick and tedious and weird-looking exercise in self-indulgence…
Richard Roeper, Chicago Sun-Times