for action/peril and some language. 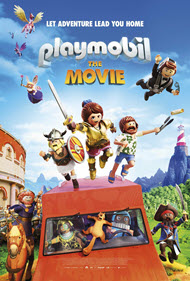 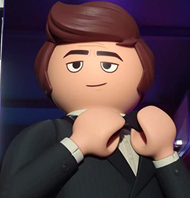 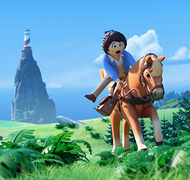 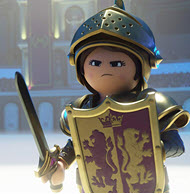 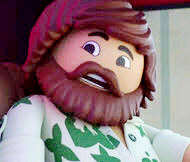 Perhaps one of the cleanest and most discussable films currently out, suited to both action-lovers and the family-minded, “Playmobil” is surprisingly enjoyable.

Marla and Charlie are a normal brother and sister who have wonderfully imaginative play-adventures using their toys. Marla also dreams of taking a real travel adventure, before going to college. But one night everything changes when Police officers come to the door and gently announce the deaths of their parents. 4 years later, we see how times have changed, as Marla has poured all her energy into working to pay the bills, while Charlie is frustrated by the seeming lack of family. After a big argument Charlie runs away and Marla follows him to a toy exhibition where they are both magically transported into a Playmobil world where their personal play worlds have somehow become reality. How will they survive and get home? How will they change in the process?

Quite a visually attractive, thoughtfully presented film, there’s plenty of color, texture, humor and action to keep everyone entertained. It really does remind you of a child’s wild imagination and their innocent ideas of what is fun and funny. More so than Lego movies and adventures like “Night at the Museum,” “Playmobil” is clearly created by people who understand how kids think. The plot seems understandable enough, on a basic level, and with pirates, flying ponies which sparkle, a secret agent, cute robot and a fairy godmother, all tastes are addressed.

Nevertheless, some of the following downsides may put off some parents.

While in the toy universe, most of the focus is on villain characters, not clean heroes. Some characters have evil occupations and are chosen for their ‘badness’—but to be destroyed in a Roman arena. The main villain, Maximus of Constantinopolis, has “the voice of an angel but heart of a devil” and likes to kill in order to keep the people happy. There is a significant amount of mild violence which is not entirely lessened by its being with plastic people and animals. There are at least 10 different types of weapons used in a battle, and the swords make metal sounds, not plastic, and it’s easy for the young and young-at-heart to get absorbed, feeling it is real.

Minor language issues. Some tantrums occur. A female says, “I’ll rip your… tongues out with my bare hands.” A young hero says, “Tattoos? Cool…” Death is often mentioned. Skeletons, skulls and cannibalism are played with.

Lastly, there are some moments that make viewers gasp and cringe. Reckless and blind driving at high speed occurs (without seatbelts on), and one self-defense groin kick from a woman to a man who becomes winded.

For these reasons, “Playmobil” may not be well suited to children or families who have been fairly sheltered from these types of issues.

On the other hand, “Playmobil” has strong sibling care themes, is fairly original and consistent, and makes sense, even if you’re unfamiliar with the company it is named after. The big positive is that it’s almost completely devoid of toilet humor, profanity, sex/nudity and cursing!

Furthermore, there isn’t such heavy promotion of Playmobil products as I expected.

And although some critics have complained about the film’s storyline, remembering my childhood games and inventions, I think it makes sense – because it is based on fun impossible desires. It’s healthy and helpful for children to act out with toys their developmental wrestling with the existence of good and evil, their frustration with everyday family life, and their longings for happy endings.

Frankly, there is very little of depth or spiritual significance in this film. There’s no mention of God, and no biblical parallels to mention.

But there is some mild fairy magic, one vague mention of a wizard and someone says, “Lady Fortune has sent…” And one character develops super-strength out of the blue. I doubt any kids will be significantly impacted by any of this, though. Of more concern are the Roman emperor who calls himself “your savior” in a song, and a general money/treasure preoccupation in parts.

Along with those, parents may like to address the following main issues with their children:

If you choose to watch “Playmobil,” please use the opportunity to teach and discuss some of these important issues facing us in today’s world and forming important parts of early church history. Please encourage your children that the Lord is with us to guide us in all our adventures and to help us to not lie, trick or harm anyone along the way. He is the real Savior, the real Creator of our universe, and life isn’t just a game, but it does have a wonderful happy ending for all God’s people who treasure good, not evil.

“Playmobil” is what I would call a classic family movie that could be used for a whole-family outing, or an at-home movie night. Although it may be slightly scary for the youngest in a family, generally the frights, toy violence and humor are mild, and certainly much cleaner than comparable films such as “Lego” or “Night at the Museum.” Parents need not be overly concerned about characters’ language, attire or behaviors. However, there are some shocks, and there is a scene where police arrive at a house to announce some awful news to children regarding their parents, so please be sensitive to fears this may raise for the little ones. Also, it does contain enjoyable musical numbers, but all of these have weak values or are sung by villains, therefore I’d suggest kids do not see “Playmobil” repeatedly. That will also help them to shrug off any longings prompted by product placements… though be warned that it does set itself up for a sequel. Overall, I enjoyed my movie experience and suspect some others may, too.

Secular Movie Critics
…a manic, hit and miss affair… The plot often seems little more an excuse to visit (and heavily promote) as many Playmobil worlds as possible…
Allan Hunter, Screen Daily
…offering up a plethora of settings that help compensate for the lack of good writing…
Jordan Mintzer, The Hollywood Reporter
…No child deserves to be subjected to this kind of blaringly witless branding bombardment; as for adults, I felt like I was being beaten around the head with the Argos catalogue. …[1/5]
Robbie Collin, The Telegraph [UK]
…a fake plastic copy… This shameless cash-in sees the German toy brand try and fail to emulate Lego’s big screen success…
Wendy Ide, The Guardian (UK) [1/5]
…hyperactive film never transcends its blatant product-flogging purpose…
Guy Lodge, Variety
…it sure isn’t much fun. …
Olly Richards, Empire [UK]