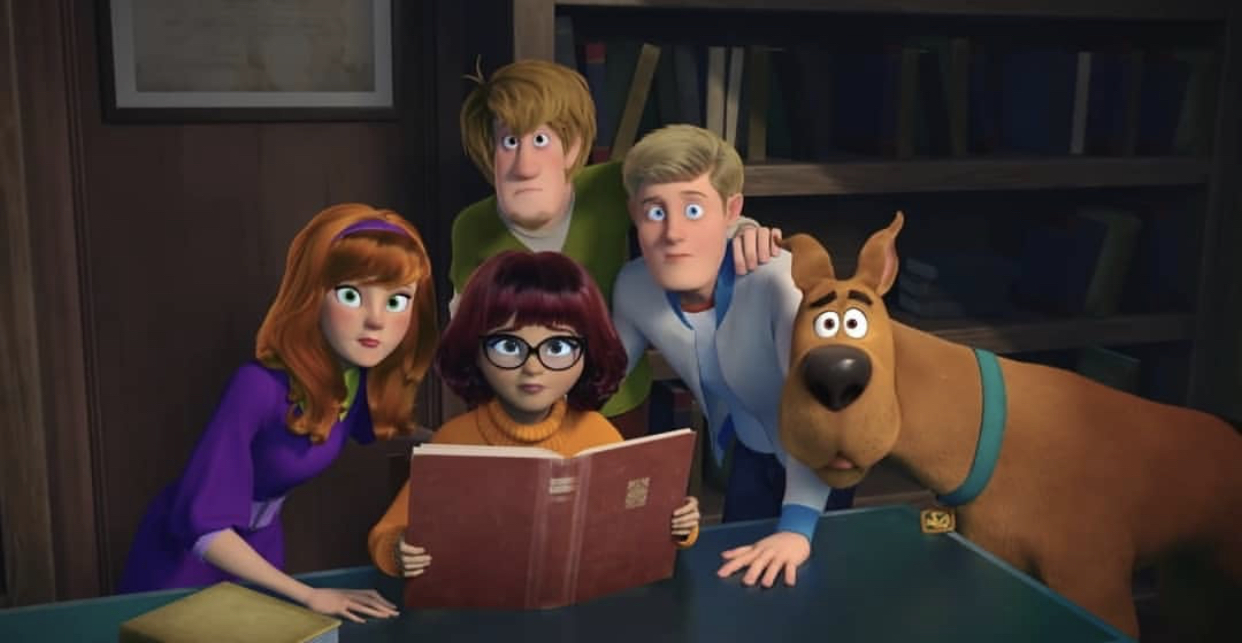 for some action, language and rude/suggestive humor. 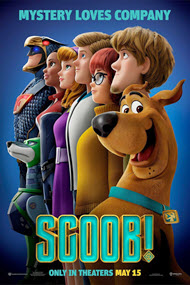 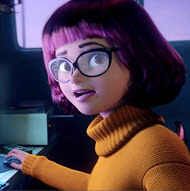 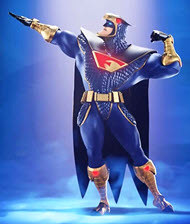 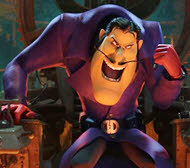 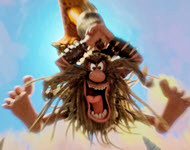 “Scooby-Dooby Doo… Where are you?”

The film starts off by re-telling how Shaggy and Scooby first met. Scooby steals some meat from a sandwich shop, only to run into a lonely, young boy with no friends. After saving Scooby from an encounter with the police, Shaggy adopts the dog as his own and takes him home. This leads to the duo trick-or-treating on Halloween; meeting Fred, Daphne, and Velma; and solving their first mystery together in a spooky house in their neighborhood.

Fast forward 10 years, and the Mystery, Inc. Gang is looking to break outside of their mold and their normal formula. In a surprising choice, the gang hires none other than Simon Cowell (in a voice cameo as himself) to try and manage their next steps. In a typical show of the former “American Idol” judge’s brutal bluntness, Cowell advises the gang to get rid of Shaggy and Scooby.

Hurt by this decision, Shaggy and Scooby head to a bowling alley, only to run into some evil robots. While on the run (per usual), the duo are saved (or should I say, friendly abducted) by Blue Falcon (voice of Mark Wahlberg) and Dynomutt (voice of Ken Jeong). Why? I’ll just stop there without spoiling anything.

As someone who’s seen the Scooby-Doo origin story already attempted (2009’s very good “Scooby-Doo: The Mystery Begins”), I can say that the first 10 minutes of the film are a little sloppy. But, the origin story part of the movie plays a (thankfully) very small part. Once we get to the iconic “Scooby-Doo” theme, the movie takes off nicely.

Which leads to the fact that the story is mostly faithful to the style and tone of the Scooby-Doo cartoons as well as other Hanna Barbera cartoons. And, I should also point out that there are Easter Eggs galore. Fans of these classic shows will need to watch closely for things hanging on the wall, names used for locations and other surprises that will certainly add to the watching experience. But, the film does a nice job of keeping the focus on Scooby and Shaggy’s tested friendship in the midst of the universe-building antics. The animation is also mostly faithful to the cartoon characters’ origins as well.

The voice acting is good for the most part, though I will admit hearing Will Forte as Shaggy did make me miss Casey Kasem. No disrespect to Forte intended, he does a pretty good job. But, Kasem will always be the best Shaggy, no doubt about it. Hearing Frank Welker as Scooby again was fantastic. And Amanda Seyfried and Zac Efron prove to be solid choices for Daphne and Fred. As for the other characters, Mark Wahlberg makes a terrific voice acting debut as he gives some pathos and development for his Blue Falcon. Ken Jeong isn’t quite recognizable (in a very good way) as Dynomutt, Kiersey Clemons gives spirit and energy to Dee Dee Sykes, and Jason Isaacs does Dick Dastardly justice.

The film sometimes dabbles in modern jokes and references that distract from the overall proceedings. Sometimes, it’s way too predictable as well. There’s a couple of way too obvious facial expressions that automatically make you know for sure what’s coming next. In addition to that, there’s some moments where the film’s message seems forced and lazily-delivered. And the animation has its rough spots at times. But, it is well-paced, pausing for just enough time for substance and character development.

While not delivered nearly as well as some of its animated brethren, the film has a lot to say about changing friendships and how to handle these situations. Shaggy shows understandable jealousy and hurt feelings when Scooby decides to go a different way. But, Shaggy does mature throughout the picture, eventually realizing that friendships are supposed to change. However, he mentions that also that just because something changes doesn’t necessarily mean growing apart. And in a touching ending, Shaggy and Scooby show how faithful they are to each other in a moving act of sacrifice.

Proverbs 17 talks a lot about how friends need to be patient and loyal in the midst of changes as well as when one might go through a difficult time.

“A friend loves at all times, and a brother is born for adversity.” —Proverbs 17:17

“As iron sharpens iron, so one person sharpens another.” —Proverbs 27:17

The film touches on the ideas of self-sacrifice, the “brotherly love” that the Bible encourages, as well as the importance of making wise and mature choices.

Language: While technically profanity-free, the film winks at obscenities a few times. Velma says, “Then all hell breaks loose. Literally.” She says this in response to finding out about an underworld possibly being unlocked. Shaggy says in one action scene, “Time to drop some F-bombs!” He means “Falcon bombs” that the Blue Falcon carries, but he does misinterpret this at first and says “Whoa. Let’s keep it PG!” A joke involving Scooby’s tendency to mispronounce words and Dick Dastardly’s name also functions as a double-entendré to something much more crude. Blue Falcon mentions autobiographies by the names of “Just Falcon Around” and “No Falcon Around.” Mild name calling includes “dynobutt,” “dipstick” and “flatulent fleabag.”

Adult Content: The Mystery, Inc. Gang is pulled over by an attractive police officer, who Fred immediately falls for. The officer is later revealed to be Dick Dastardly in disguise, leading Fred to say “I’ve got mixed feelings.” He then remarks that the disguise was “pretty hot.”

Violence: There’s a lot of chases and slapstick action throughout the film, but it is all mild. We see glimpses of a few monsters Scooby and gang fight that may scare very young viewers. A character smashes someone through a rock. Robots are smashed to pieces, whacked with a hammer and have lots done to them. An adorable robotic head is yanked off and burned in a furnace by Dastardly. An ending action scene involves a three-headed supernatural giant dog Cereberus (whose appearance isn’t too threatening) nearly gobbling up a couple of characters.

Drugs/Alcohol: A brief mention of “12-year old scotch,” but nothing else noticed.

Other: Unlike some “Scooby-Doo” mysteries (which most end up with a guy in a mask), this one involves some supernatural mumbo-jumbo. It’s revealed that Dick Dastardly intends to open the portal to the Ancient Greek underworld (we later find out he’s trying to steal treasure located there). Dastardly also intends to unleash Cereberus (noted as the “dog of Hades”) from the underworld to cause a dog apocalypse of sorts.

We don’t see much of the underworld talked about, but we do see an ancient version of Athens get magically reconstructed as a result of opening the underworld. Elsewhere, we see images of ghosts in a theme sequence. Elsewhere, Blue Falcon has his insecurities and his immaturities. He also likes using the hashtag #foxyfalcon. Scooby steals from a sandwich shop. Dick Dastardly is accused of different crimes (including stealing from his Mom’s Netflix account). A brief mention (and sighting) of pterodactyl droppings. Fred complains about a smell in The Mystery Machine, leading Scooby to say, “I told you, I needed a walk!”. Dynomutt asks people to “puke” on Blue Falcon if they have the urge to do so.

During my late elementary and middle school years, I was very into the “Scooby-Doo” movies released straight to DVD, as well as the other Hanna Barbera cartoons of the old days. I remember saving my allowance to buy one “Golden Collection” DVD a month, and watch episodes on repeat. These characters established the Saturday morning cartoon formula that continued to run until streaming started up.

In many ways, “Scoob!” reminds me of the simple, zany, quick-paced and fun feel these cartoons carried. For the most part, it’s faithful to the 60’s and 70’s cartoons in scope and style. And while there are a few problems and hints of an unnecessarily modern edge, I can say that the overall film is still way better and much more fun than it could have been.

In terms of content issues, parents should be aware that this mystery does involve supernatural elements. Yes, they are mild and cartoonishly-handled (and it’s certainly less dark than the borderline demonic “Zombie Island” and “Witch’s Ghost” straight-to-DVD movies from the late 90’s), it still plays a prevalent enough role that may make some parents raise their eyebrows. However, beyond that and a few isolated double entendrés, there’s not much else to complain about. The violence stays mostly in slapstick territory.

In the end, “Scoob!” is a solid, fun and relatively family-friendly adventure that will entertain young ones while providing some nice wit and fun moments for the adults. It’s far from a perfect film, but it’s certainly a worthy watch (especially for fans).

Comments from non-viewers
Negative—I first decided not to watch this movie, based on the trailer—drawing style and voices of the character. After reading this review, my decision has been cemented.

The fact that they use Falcon’s name in replace of a bad word, I can already hear my niece’s copying it, and I won’t let that happen. It’s those subtle things that can change the wind for children. Letting those types of things pass, can cause bigger damage in the long-run. This also applies to Fred having those “mixed feelings” even if briefly mentioned.

I am a Sunday School Teacher and try to find different movies that I can incorporate in my lessons. I have been a Scooby-Doo fan since I was a little girl (emphasizing on the fact that all the “monsters” were humans) but I couldn’t bring myself to watch this one.
My Ratings: Moral rating: Average / Moviemaking quality: no opinion