for some rude material and mild peril/violence. 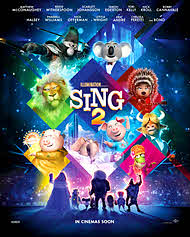 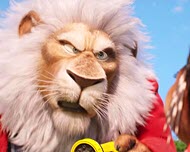 The power of music to touch hearts 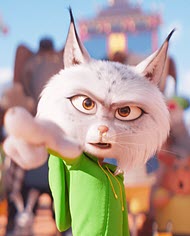 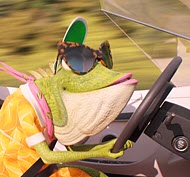 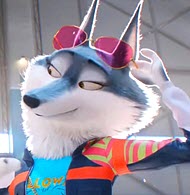 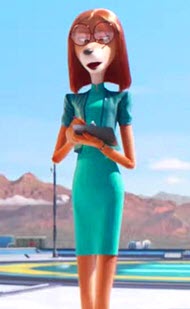 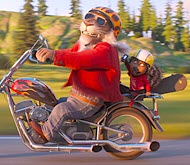 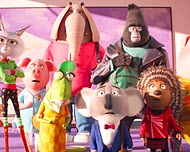 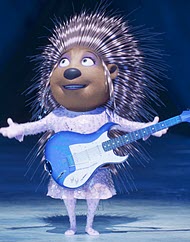 After opening the “New Moon Theater” to rousing success, Buster Moon (voice of Matthew McConaughey) is looking to take his shows to the next level. What could possibly be bigger? Why, Redshore City of course! (this universe’s version of Las Vegas) However, a talent scout for one of the city’s theaters gave them a negative review, so should they stop trying? No. Buster and his performing crew immediately take a bus to the city, with hopes of landing an audition.

After successfully sneaking into one of the city’s most prestigious entertainment venues, Buster and the gang immediately fail their audition (along with almost everyone else that comes that day). Just as they are about to be pushed off stage, Gunter (voice of Nick Kroll) comes up with an idea that interests the judge. A science fiction musical with music by the legendary Clay Calloway. Buster reluctantly goes along with the idea, and the theater head (voice of Bobby Cannavale) gives him three weeks to get Calloway and the show together.

Of course, this means taking Gunter’s idea and putting it into a real show in that amount of time. And, to make matters worse, Calloway hasn’t performed in 15 years and has been off the face of the earth due to dealing with unexpected loss. Can Buster and his crew pull this show off?

First, “Sing 2” has some very colorful and solid animation. It’s a step up from the original in terms of overall character design and creativity, while the backgrounds shimmer with a mix of Las Vegas and Dr. Seuss-inspired enthusiasm. The overall stage show is a hoot, with several well-choreographed elements as well.

The voice acting and singing is strong overall. Similar to the first film, McConaughey portrays his character with a convincing showman attitude. Reese Witherspoon, Tori Kelly, Scarlett Johannson and Taron Egerton are also on point with their characters as well, with each one getting at least one spotlight musical moment. Out of the new characters, Cannavale portrays the villain quite well, while Letitia Wright and Bono are fantastic in their roles (though the former seems a little bit sidelined here). Halsey has a couple of scene-stealing singing moments, but her character wasn’t necessarily my favorite. Thankfully, her character does go through some maturing as the film progresses.

The story, however, as a whole, isn’t quite as emotionally compelling as the original film. The only part of the storyline that manages to pull at the heartstrings here is Calloway’s backstory, though it is lightly touched on. The characters, in the meantime, are given challenges, but they are not quite as down-to-earth as the original film. Another issue I had with the film is that there are too many songs used as background music here. It’s to the point where there’s pretty much no musical score.

However, the comedy is on point, and led to several laugh-out-loud moments. A couple of interesting twists late in the game add extra suspense as well. The pacing, mostly, remains light on its feet and quick.

The film’s main message involves the importance of chasing your dreams, no matter what obstacles are in your way. Despite being told over and over that they “aren’t good enough”, Buster and crew push through until they reach their goal of having a show in Redshore City. Of course, pursuing any dream isn’t easy, and “Sing 2” shows that there will always be naysayers and those who are unsupportive.

There’s also a strong message on overcoming fear. Two characters learn to overcome their fears through the encouragement, love, and patience of others around them. The Bible says, “Do not fear”, 365 different times. However, my favorite verse about persevering in the face of fear is Joshua 1:9, which encourages us…

“Be strong and courageous, do not be terrified, do not be discouraged, for the Lord your God is with you wherever you go.” —Joshua 1:9

LANGUAGE: There’s no obscene language in the film, but there are a few close calls. Someone is told to “go to heck”. We hear several other uses of “heck” and “oh my gosh”. Unfinished uses of “what the…? and name-calling are used also.

VIOLENCE: A villain threatens Buster on a handful of occasions, snarling at him and eventually throws him from precipitous heights a couple of different times. Johnny breaks his skateboard in half in frustration. A car crashes into a couple of places. A couple of characters are electrocuted by a fence and pass out. A character is whacked by wooden sticks on a few occasions. One is barraged by paintball gun bullets in one scene. However, other than Mrs. Crawley comedically losing her glass eye from time to time, no one is too badly hurt.

ADULT CONTENT: In a questionable moment, Meena is required to kiss a love interest in the show. She clearly is nervous and hesitant to do so, and says she would not want to kiss a stranger. However, Buster does not heed her request. Meena does, however, fall in love with a friendly ice cream vendor (voice of Pharrell Williams), and pretends she is performing the song with him. Elsewhere, Mr. Crystal wakes up apparently naked in one scene (we see a furry chest and legs, and an assistant screaming from seeing it). A couple of characters kiss. A tiger is seen in underwear. One narcissistic character is introduced with a sultry, hip-swaying musical intro, and comments on how girls can’t get enough of him. A few suggestive dance moves.

OTHER: A few songs in the catalog are not exactly kid-friendly (“Look What You Made Me Do” by Taylor Swift and “She Bangs” by Ricky Martin are a couple of examples), but most are heard briefly. Mr. Crystal acts selfish, cruel and rude throughout the film. He threatens to cancel the show, then takes credit for it when it succeeds. His daughter starts off being very immature and selfish as well (but she changes her tune). Characters lie. A character constantly corrects another for interrupting him. One female character is given less money for a concert simply because of her gender. Someone says Meena looks like a “goddess”.

I loved the original “Sing” when it came out 5 years ago. Not only was it a fun, chase your dreams, “let’s put on a show”-style story, it also developed its main characters into ones we could root for. Not to mention, the film had standout singing performances (I listened to the soundtrack for months), some hysterical song choices, and a really solid emotional undercurrent that ran through it. It remains my favorite film that Illumination Entertainment has made so far.

Going into this movie, I know it’s hard to have lightning strike twice. Here, even though the stakes are a little higher, the overall character arcs and heartfelt themes are not quite as prevalent this time around. The character development isn’t quite as strong, and with the exception of the moving plotline involving Clay Calloway’s return to the spotlight, nothing else quite hits the mark like the first film’s storylines did.

That isn’t to say this sequel is a disappointment. It’s still an enjoyable movie. The animation sparkles. The songs are fun (particularly the U2 covers!). Characters are well-balanced and almost no one is left behind in terms of screentime. And there’s a couple of nice encouragements on chasing your dreams and overcoming your fears. Overall, that’s better than average for many (often PC-driven) kids’ movies and TV shows these days.

Parents will need to be aware of a few mild content concerns going into the film. A few song choices and situations may cause some eyes to roll, though it may go over the heads of young viewers. There’s some lying and deceiving behavior here and there. A situation involving one character being asked to have her first kiss onstage is worth noting. And, a minor plotline involving someone overcoming grief might be a bit difficult for some sensitive moviegoers.

In the end, while it doesn’t quite hit the home run of “instant classic” like its predecessor, “Sing 2” is at least a solid double from a quality perspective. For fans of the original, it’s worth a watch. For Christian families (with kids ages 6 or 7 and up) looking for something to watch together, it’s definitely one of the cleaner options out there.

Positive
Positive—Our family watched this in the theater and loved it. I found it more entertaining than the first one. More fast paced, more laughs and less sad moments. There were a couple scenes that have already become repeatable quips in our home that bring a smile (pew pew). I recommend this as a good family movie.

Only questionable part is the main bad guy (a big wolf). He actually tries to kill someone twice. Not sure why this is needed in an animated movie. He was intimidating every time he was in a scene.
My Ratings: Moral rating: Better than Average / Moviemaking quality: 4½
Brett Binder, age 44 (USA)
Positive—This is a fun movie, I really enjoyed it. One of my favorite plotlines was the Clay Galloway character, and glad U2’s song, “I Still Haven’t Found What I’m Looking For,” was featured. Also, I like how Biblical lessons were present, such as being kind to those unkind to you.

(Spoilers?) One of those was how Buster showed that to Jimmy Crystal. I got a kick out of Buster telling him that Miss Crawley left cushions and snacks for his comfort when he had Crystal trapped. And of course there was Crystal’s poor little cat assistant Jerry, who was devoted as ever. I’ll be getting the DVD.
My Ratings: Moral rating: Better than Average / Moviemaking quality: 4½
R.l. Fett, age 56 (USA)
Negative
Negative—Would have been a fantastic movie until they added homosexual innuendo at the end, when the wolf’s male assistant screams that he loves him. Very inappropriate for a children’s movie.
My Ratings: Moral rating: Offensive / Moviemaking quality: no opinion
Kyle, age 39 (USA)