Interview with Peter Jackson and other creators of “The Lord of the Rings: The Two Towers” (2002)

See our REVIEW of “The Two Towers”

“The Lord of the Rings” is perhaps the most ambitious film project of all time. Peter Jackson, the visionary behind this ambitious project financed by New Line Cinema, tells us that it’s been seven years in the making so far. Seven years! That’s almost two college degrees! Birth to second grade for Junior! What will “PJ” do when this heftiest of projects comes to a close? In what ways will he “return to life”? “What life?,” he quips.

Early this December, just two weeks before “The Lord of the Rings: The Two Towers” is released nationwide (12/18), I had the chance to sit down with a number of the cast and crew members who have invested a chunk of their lives in Tolkien’s world. These top-notch guys and gals, brought together from far and near, include:

They, along with almost 2500 others, spent a year and a half together living in New Zealand (that’s near Australia for those of you geographically challenged) where this series of films was produced. Such a long period together gave the team a chance to really get to know each other well, a big contrast to the often weeks-long shoots most “normal” films take. But anyone that’s seen “Fellowship of the Ring” knows that this is no “normal” film undertaking.

Each person I interviewed was fascinating in their own way. Among my favorite to speak with was John Rhys-Davies (who plays Gimli the Dwarf, and no he’s not really that short in real life), Andy Serkis (who provides the movement and voice of Gollum, which plays a significant part in The Two Towers), Miranda Otto (playing the White Lady of Rohan who is absolutely captivating in person), and Sean Astin (who had lost 35 pound since wrapping up filming and made me feel like I should be chanting “Ru-dee! Ru-dee!” as he entered the room. Guess you’d have to be there.)

As a Christian media writer for Christian Spotlight, I find that the questions I try to pose are often quite different from the standard inquiries secular press directs their way. Keep in mind that even though British author J.R.R. Tolkien was a committed Christian writer, those who put together “The Lord of the Rings” don’t generally share the same worldview at all. So it can be a tricky thing. I want to know how working on these films, arguably chock-full with Christian parallels, affected each cast and crew member spiritually. Or what kind of life lessons did they come away with? Or what kind of character qualities were displayed and developed during the demanding shooting schedules?

Both Pete Jackson and Richard Taylor talked of how Viggo Mortensen (Aragorn, aka Strider, Human) faced what some would call an actor’s worst nightmare when his tooth broke off while filming. PJ tells us:

“Viggo was a real trooper. He just became like the team leader. He worked really well with all the stunt guys. There were some stunt guy that I think Viggo ultimately killed them like 27 times during the course of the battle. They got along really well with each other. The battle of helms deep embodies a lot of the spirit Viggo brought to the film. He just worked ceaselessly in making that the scene that it was… one of the things that happened with Viggo in that battle scenes was there was a moment when one of the Orc swords whacked him in the face. Hit him in the mouth. And his front tooth snapped off at the root. Like literally broke in half and fell on the floor!

Of course, every normal actor at that point would say “Stop! Stop! Take me to my trailer. This is appalling. I’ve got to fix my tooth.” You know an actors’ front tooth is part of his livelihood. And what Viggo did was he immediately snatched it up and said “Get me some super glue! We’ve got to stick this back in and carry on.” He was yelling out for glue! Needless to say we rushed him for emergency dental work. But that’s just the sort of guy he is.”

John Ryhs-Davies talked about some life lessons he came away with after studying Tolkien’s life:

“…If you do not have unity, courage and a willingness to sacrifice yourself you can lose it all. In a way we need the spirituality of the Elf, we need the earthly indestructible quality of the Dwarf, above all we need the great and good, simple heart of the Hobbit. And we must aspire to be the King that has yet to come into his place… As the King is to the country, so the head of the family has to his family. Men should aspire to be kings. In a way, we all do. We all have a choice. We’re either slaves or Princes. We make slaves of ourselves to readily. So easily. We should be striving to be Princes with each other [with] a level of courtesy and mutual respect.”

And John also gives us something to pray for, perhaps without even realizing it. Recently while shooting another film in Eastern Europe a 35-foot wall fell on him, injuring his back and breaking his right arm:

“The other night in a bed of pain I woke up. Incidentally I discovered the other night why perhaps some priests should be celebate… I woke up in this bed of pain and realized one of the things that happens when you’re on your own at night is that God has a chance to put a word in edgewise. The conversation sort of went like:
--“Ouch!”
--“Are you awake?”
--“Yes. I’m awake. Listen, I’ve got a question. Why’d you have to drop a wall on me? I mean, a whole wall?”
--“Well, you know sometimes you very important people are very hard to get to.”
--“Well, but a wall, Sir?”
--“Yes, I know. Anyway, did I get your attention?”
--“You got my… why my right arm as well? You know I always like to sleep on my right arm?”
--“Yes, but you’ll notice it’s only the bottom part of your right arm…”
He’ll reel us all in in the end. And He’s got the time.”

A big thanks to ChristianSpotlight.com readers, Tolkien fans, who helped provide some questions I was able to ask to Otto, Davies, and Shore.

Teen reader Cade L. is an aspiring film composer interested in knowing what Oscar-winner Howard Shore recommends one do in order to eventually become a film composer. Shore suggests:

Listen to Howard Shore give advice for aspiring film composers

“Being a film composer is no different than being in a theater group: the musical part of the group. I worked on “Saturday Night Live.” If you’re interested in film music, you should be interested in theater. A repoirtre company.”

He further talks about the technical aspect of composing music for a film like Lord of the Rings, for which he won an Oscar for “Best Original Score” (2001). Shore was educated formally at the Berklee School of Music in Boston and worked with the group “Lighthouse” (1969-72) and was Musical Director for “Saturday Night Live” (1975-80). He has also composed the score to more than 60 films.

“A lot [of the music I compose] is from childhood—music I was trying to write as a kid but didn’t have the London Philharmonic [at my disposal]. What could be better than “The Lord of the Rings” the book? When you see your part in what others are doing, that’s inspiring!”

In referring to the major steps that go in to composing a score for “The Lord of the Rings”:

“I think of it as an opera piece. A 10 hour film. The process is given in scope, but small areas that connect (like a painter) into a complete canvas… A 26 minute piece [may take] 2-3 months [to create]… I write in longhand. Pencil. Music to me exists on paper. I write it in my head [where] it’s very emotional, not intellectual. Music is about relationships. You can hear the lines and the relationships.” 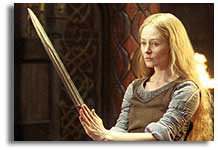 Anna A., another teen Spotlight reader, was interested in the character of the White Lady of Rohan and wondered if the real-life Miranda Otto was anything like her character, or what qualities she admired in her character. She replies:

I wish I was half as strong as she is, actually. I’m sort of in admiration of her

The thing that we had to work on was, I was interested in the fact that she was very reserved and cold and that’s how she’s written in the book. She doesn’t really give a lot away. And when she does give things away, it’s at quite an expense to her. She’s a very proud person. She doesn’t wear her heart on her sleeve.

But when you’re writing a film, people tend to want to make you more accessible to the audience. So the line that we were trying to tread was me very much trying to push more toward she is cold and reserved and strong and maybe slightly more enigmatic, but then we were also trying to make her more accessible.”

Interviewing these masters of the craft leaves you in awe for the amount of work each one pours into their own specific role. And in the limited time I have with each person, I’m always left with more questions than answers. Hey, inquisitive minds want to know! Yet I’m very grateful that some of the major studios (like New Line) are starting to recognize the enormous pull the Christian audience can have on the support or failure of a film when we put our collective hearts into it.

If you haven’t read it already, be sure to read Spotlight’s review of the film which includes a number of Christian worldview themes to watch for in “The Two Towers”.

I leave you with some parting “words of wisdom” for young people from none other then Elijah Wood (Frodo) and Sean Astin (Sam):

“Embrace those friends that you have-even if it’s only 1 or 2.” —Elijah Wood

“You can’t have it all at once. Take it as it comes. Learn to live each moment.” —Sean Astin

Listen to Sean Astin (Sam). On…

Listen to Andy Serkis (Gollum). On…

Listen to Peter Jackson talk about…