for language and sexuality. 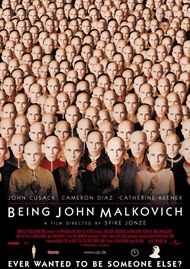 “Ever wanted to be someone else?”

“Being John Malkovich” is probably the most relentlessly bizarre movie to be released this year. This is definitely not a bad thing. The first feature for both director Spike Jonze and writer Charlie Kaufman, it’s an amazing debut.

Craig Schwartz is an out-of-work puppeteer. Tremendously successful as a starving artist, but little else, he gets a job as a file clerk for a corporation (that just happens to have its headquarters in an office only 4½ feet tall). There, in his office, he finds a portal that sucks him into the head of actor John Malkovich for 15 minutes before spitting him out again on the side of the New Jersey turnpike.

Pretty soon, he and his coworker Maxine (whom he lusts after), are selling tickets to John Malkovich for $200 a pop. Pretty much everyone undergoes a major identity crisis, including poor Malkovich, who ends up having his head perpetually messed with.

One of the great things about “BJM” is that it blends a huge amount of hilariously offbeat humor with an equal, though much more subtle, amount of haunting tragedy. The film reeks of broken dreams, childhood traumas, loneliness and unfulfilled longing. At the end of the movie, I was unsure whether to laugh or cry. Blending of comedy and drama done in so skilled a manner is rarely found in films. As an example, this is the first film I have seen that easily transitions from discussions about the nature of the human soul to a chimpanzee having a flashback of its parents' capture by hunters.

The acting is terrific, and the casting is phenomenal. Cusack and Diaz are nearly unrecognizable, and Malkovich deserves an award for not only allowing the film to be made, but diving head-on into the self-parody his role required. Jonze’s directing and Kaufman’s writing is appropriately surreal, playing the whole setup surprisingly straight. Also of note is the excellent music, both haunting and beautiful.

There’s little violence in the movie, but there is a lot of profanity. The thing that I think most people will take issue with is the sexuality here. Not that there’s much nudity, but there are several sexual situations in the film, which become increasingly weird when identity comes into play. For example, Craig’s wife falls in love with Maxine, but only when she is John Malkovich. I’m kind of confused myself what to make of it. Not really homosexuality in the conventional sense, though there are definite undercurrents in that direction, especially at the end. Definitely bizarre though. Either way, it’s wrong from a biblical standpoint.

What is interesting is the exploration of identity here. What makes me me? If I were in John Malkovich, would I still be me? So many people are unhappy with their lives, and given the chance, would love to be someone else, if only to view life from another perspective. (The grass is always greener…) In a way, “Being John Malkovich” is also a metaphor for cinema as a whole, too: for a limited amount of time, people will pay money to experience things they would never be able to in real life (the success of “Star Wars”, for example, is partially due to this phenomenon, in my opinion). These intricacies and explorations in the film (though they don’t really provide hard answers, just serving as a springboard for the viewers own thoughts) are what makes it truly great.

Both funny and heartbreaking, entertaining and thought-provoking, “Being John Malkovich” is a great movie. To those of you who love cinema, and are not deterred by the film’s objectionable content, I would highly recommend you check this one out.

strong caution!… Bizarre, yes. Surreal, yes. Genius in concept, yes. I saw this movie because the critic who reviewed it here highly recommended it. I did not pay attention to the warnings. I should have. Vulgar language, I thought I was desensitized to it. Sexuality, it’s all over the place. I was not prepared for what I saw in the second half of the movie. Not that I should be prepared to watch, nor should I watch such subject matter. I could not believe the movie would continue in the direction it did. So I continued to watch masturbating puppets, graphic sexual encounters (even though the actors were fully clothed), lesbianism, adultery and extra-marital sex were humorized. However, as a Christian, none of the immorality is funny. That is the reason I cannot recommend the movie. I am warning friends to stay away from it. It pollutes the mind and uses humor to justify it. This could have been a positively classic movie, enjoyed by “right-brains” for years to come. Instead, it should be avoided. My Ratings: [1/4½]

Kay O’Grady, age 48
dark and depressing… I read the reviews and thought that my husband and I would enjoy a thought provoking and “hilarious” movie. Alas, although there were some amusing moments the whole film was very dark and depressing to me. There was not one person in the whole film who was in any way likable. They were all almost pathologically self-centered. I came away feeling like I needed a shower. My Ratings: [1/2½]

Sue Lauchlan, age 46
I was drawn to this movie from sheer curiosity. Sometimes the normal boy meets girl plot gets boring, and you want to see something different. That was the same reason that I saw “The Matrix” (which is an awesome film). As I was sitting through the first part of this movie I was just waiting for them to tie John Malkovich into it. It seemed like forever before something about him even happened, but once it did I was even more into the movie. Now there are some things in this movie that completely bothered me (Maxine’s love for Lottie and vice versa for example), but overall I have to say that it was a very good movie as far as plot goes. I would recommend this movie to (no one under the age of 18) people who are in the mood for a good fantasy. My Ratings: [2½/4]

Scarlett Story, age 20
Hoo boy… The 7½ floor bit was wonderful, as the fact that I had to be told that THAT was Cameron Diaz under all of that makeup made it really nice. The idea of “being” Mr. Malkovich was a funny idea at first, and to see people line up to go into his mind was very disturbing. And then the girl at the end (I won’t give it away) was equally disturbing. An aspect of this movie is the idea of eternal life, and the length people will go to escape death. Of course, this is a point Christians should think of, and possibly talk to with other who have seen the movie. The issue for Christians is going to be the weird love triangle. It ALMOST ruined the movie, but not quite. Overall, just be glad it wasn’t “Being Pauly Shore.” My Ratings: [2½/5]

Justin, age 22
morally warped… From a Christian viewpoint, I believe this movie was morally-warped. Do not—I repeat—do not bring children to this movie. Produced by “Propaganda Pictures,” it proposes very objectionable ideologies (i.e. gay agenda)… I admit, there are some good laughs. But unfortunately, laughter does not replace morality and truth (or good conscience)… My Ratings: [1/3]

The opening sequence of “Clark’s Dance of Despair” was worth the price of admission and more—everything else was a glorious bonus. Spike Jonze (who played the knuckle-headed fourth in “Three Kings”) fills his film with so much comedy and unsuspected wit that I couldn’t help but befriend the movie. And John Cusak plays for the first time in my experience, a thoroughly dislikable fellow (though like always, he is misunderstood by the world around him), and that well enough that I nearly didn’t recognize him.

Every cinematic detail of this film screams “Amazing” to me! And did I mention the puppeteering? And now to my never-ending tirade. Why-oh-why on this fallen Earth do people attend a Rated-R film and then act shocked when they discover that when the MPA decided it to be unsuitable for general audiences, they—shock, shock, horror—meant it?

I ran into this same problem with “The Messenger”: my friend, with whom I attend a showing of the latest Besson effort, were surprised and dismayed by the battle-gore on the screen. Two even walked out because of their sensibilities were so offended. But they knew it was rated for “Mature Audiences.” I think it some form of mild hypocrisy to be angry at a film for holding true to its advertisements. Ah well… My Ratings: [2½/5]

Seth T. Hahne, age 26
This brilliant surrealist film provides a window into questions about ideas of self, other, separation, alienation and attraction. It also explores ideas and phantasies of power over and through the skin of another. While not necessarily complimentary to aspects of human expression, desire, and behaviour; it does give the viewer much to think about.

As a send up it is truly magnificent, making wonderful light of the cult of celebrity and the desire on the part of many to be “the other.” The characters struggle with their fatal flaws and become puppetmasters of John, all the while being puppets to an additive projection and phantasy, which does not deliver the goods of freedom and contentment. Never at home in their own skins, they only feed the worm of an ultimate form of escapist phantasy which ironically delivers them only into greater alienation and misery. As tragi-comedy, this film works, and it left me with the slightly strange sense of looking out of my own eyes with a somewhat surreal perspective.

To whom do I recommend this film? Lovers of surrealism will adore it, though I can’t give it an unqualified recommendation. Some people may not appreciate the essential questions which can be triggered by this type of film. It is provocative with respect to how we see, think and feel about ourselves. For some the exercise will be valuable and insightful, for others profoundly disquieting and disturbing, and for others it will simply be ingeneously entertaining. Feel free to see it, but leave if it offends or disturbs. My Ratings: [2½/5]

Nick, age 41
I read the review here, and I really wanted to see this movie. I am a fan of Malkovich, and I had seen some off beat trailers on the film. The film as art/story is exceptional, and I would recommend it as a movie for very, very mature Christians. Stupidly, I took my fourteen year old with me to the film, and I was unprepared for the graphic sex scenes. Be warned… though there is not a lot of blatant nudity, there are graphic portrayals of the sex act. The last third of the movie concentrates on a most bizarre love triangle. I did not pick this up from the review. It is absolutely unsuitable for a young teenager, and I regret that I brought him. My Ratings: [1½/4½]

CER, age 50
I have viewed the premiere of the new release in our area: “Being John Malkovich.” Complex story line, many good character development moments, funny throughout. Warning: Adult themes of confused sexuality not at all suitable children, even adolescents. It is yet another secular movie, not sensitive to fundamental Christian beliefs, IMHO. Very interesting story line but hinged on incredible metaphysical concepts.

Because the story premise is built around a façade of John Malkovich’s career, this is a “must see” for the cult following of Malkovich’s fan club. Reminiscent of MUSE in the sense that paranormal/spiritual undercurrents are applied to advance the aspirations of a contemporary stage/theatre/movie actor. Cameos by real life film critics and actors like friend Sean Penn, attempt to give authenticity and advance the story. Thought provoking and should be rated 4 stars for general audiences and fans of John Malkovich. Christian viewers be forwarned. My Ratings: [2/5]