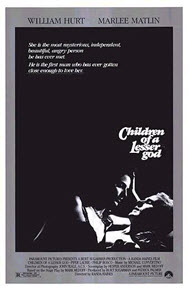 I like films about effective teachers and “message” films about people coping with illnesses, injuries or handicaps. This one fits in both categories and the message is good; but it has even more unnecessary offensive content than most other films of these types.

A new teacher at a school for the deaf and hearing-impaired, James Leeds (William Hurt) uses unconventional methods (such as very loud rock music) to get his students to want to learn to speak. He also takes an interest in an adult woman, Sarah (Marlee Matlin), a former student and now an employee of the school. Part of his interest is in persuading her to learn to speak and to read lips (she prefers to rely on sign language alone and refuses to be told what to do), and part of it is romantic. The story’s primary aim is getting us to understand all the things in her life that have combined to make Sarah what she is. In a scene where Leeds and Sarah attend a party for a deaf person who doesn’t speak but is a high-level government economist, Leeds feels out of place among people who only sign and don’t speak, the same way Sarah feels out of place every day of her life among mostly hearing people. The closely-knit “deaf community” referred to in this film does exist, and the resentment by deaf people of the ways in which they are judged and restricted by hearing people is in many cases justified.

Warnings: profanity is heavy, with many uses of “F*” plus all the other colorful language usually found in R-rated films. Most of these profanities are signed as well as spoken. We even see Leeds using profanity as a teaching tool. When a deaf student uses a sign to call him an “a*h*” (over a disputed foul while playing basketball), Leeds says nothing about the disrespect involved, he just forces the student to say it aloud instead and to repeat it until he pronounces it correctly. There are several scenes of simulated sex between Leeds and Sarah, but no frontal nudity. Their relationship is given the normal Hollywood treatment: their first kiss is also the time they first fall into the sack (or in this case, into the swimming pool).

Positives: for mature audiences, this film gives a better understanding of the problems faced by the deaf. All the dramatic performances are very good; Matlin’s is excellent. Matlin, who is actually deaf, got her big break and earned an Oscar with this film, then went on to star in two TV series. I wish I could recommend this movie as suitable for teens, but I cannot.