/ In Spanish with English subtitles 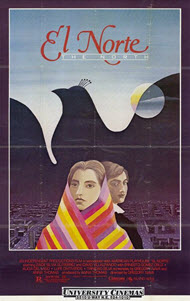 This is the emotional and politically-overtoned story of an adult brother and sister from Guatemala who emigrate to the United States when their family is persecuted because of their father’s labor movement activism.

Many people in Enrique and Rosa’s village dream of someday going “al norte” and experiencing such fantasies as flush toilets. For most, it’s just a dream. But after the deaths of their parents, Enrique and Rosa make the journey out of necessity. After crossing Mexico, they seek for the best way over the U.S. border. Some of the “Coyotes” (border guides) will just take their money and then abandon them or turn them in, so they must choose wisely. After one failed attempt, they use a rat-infested tunnel on their next try. But even after crossing the border, things don’t turn out as they’d hoped.

Content notes: No sexual activity or nudity, just a back view of Rosa changing her top. Several violent or scary scenes, and some sickness and death. One Coyote instructs the innocent Enrique how to swear like a Mexican so that if he’s caught, the border guards won’t know he’s really Guatemalan (yes, we get to hear the Spanish equivalent of “F*” and see it translated in the subtitles). There’s a final scene of a severed head hanging from a rope; this is a symbolic device used in some Latin films to signify that the character has committed suicide.

Two questions that might be asked about this film’s accuracy: Are most people in Latin American countries as poor and destitute as pictured? And is it reasonable that the Army would be used in political reprisals against civilians?

About question one: My former employer operated a plant in Ciudad Juarez (across the border from El Paso, TX) and the American supervisors who crossed over to the plant every day were warned, on pain of being fired, never to discuss life in the U.S. while on duty lest they make the Mexican workers more discontented than they already were.

About question two: I had a Spanish teacher who was raised in a wealthy Mexican family. One day a family member made the mistake of reporting a crime he saw the brother of Mexico’s president commit; that night, army tanks rolled into the neighborhood and blew their home and the family business to smithereens.

This film will give mature audiences a better idea why we have such a large illegal immigration problem, and may help us to have more compassion for those who’ve given up everything in search of a better life. We all have spiritual as well as material needs; whether we’re rich or poor, the only way to true happiness is in knowing Jesus. Sharing Him with someone is even more important than sharing our Earthly wealth.

Some depressing content, but, overall, I thought the brother/sister love was very well portayed as the two main characters search for a better life, appreciating things we daily take for granted. The ending is dour though, and I suggest hitting the stop button before the closing severed head scene, which spoiled the theme to then. My Ratings: [2/3]