for sexual innuendo and crude humor. 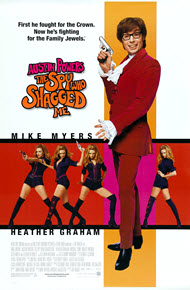 Mike Myers revives Austin Powers, international spy, once again in this sequel spoof “Austin Powers—The Spy Who Shagged Me.” For those not familiar with the term “shag”, Webster’s Dictionary offers some insight.

Shag (vt)—to chase after and return; (vi. 1938) to move or lope along; to dance the shag; (n) a dance step executed by hopping lively on each foot in turn; a shaggy, tangled mass or covering (as of hair).

Austin Powers fulfills all three definitions. He sports a shaggy mass of hair (both on his head and on his chest). He constantly chases the bad guys. And as a “swinging single” from the 60s, he loves to do the shag. Not found in Webster’s, however, is the film’s most common usage of the word shag to mean sexual intercourse. Thus, you have the play on words in the title of the movie, which aptly describes Powers' character and the theme of the movie. There is a lot of dancing, chasing, tangled hair and sexual innuendo.

Powers was originally frozen in the 60s and thawed out in the 90s. The movie opens with Myers celebrating his nuptials with new bride Vanessa Kingsington (Elizabeth Hurley). As with the real spy movies, happily ever after doesn’t seem to last too long and the honeymoon is aborted abruptly with the first twist in this thin plot. After this quick tie-in to the first Austin Powers movie, the opening credits roll with Myers prancing around the hotel naked. The titles zip in and out barely covering his front and his bare derriere. There is no deception here. The film makers want you to know most of the humor will be based on nudity and sexual innuendo.

The story line and plot are not the main ingredient in this latest comedy by Mike Myers. The script even pokes fun at the large plot holes and inconsistencies. Powers discovers Dr. Evil is back on the scene plotting once again, to take over the world. Dr. Evil warps back in time and Powers must follow him to 1969 to thwart his evil takeover plan. It is back in London where Powers meets his new love interest and CIA operative, Felicity Shagwell played by Heather Graham.

The costumes are excellent for the time period. As the obligatory starlet in this spy flick, Felicity hits her mark as the sex symbol for the film with big hair and scanty outfits. This undercover agent will do whatever it takes to complete her mission—including wearing the most revealing of outfits, flashing her bare breasts (not actually seen by audience) and having sex with the most repulsive of characters, Fat Bastard.

The most enjoyable part of the film comes from the quirky music and dance sequences. Powers shags from one scene to the next in transitional dance sequences that are very funny. In another musical scene, Dr. Evil sings to the tune of Wil Smith’s “Just the Two of Us” as a dedication to his evil midget clone, “Little Me.” During this scene, portrayed like a music video, Dr. Evil laments about his real son (Scott) not being evil enough and praises his evil clone. The singing and rapping is funny, but not the way Dr. Evil belittles his son. But, who would expect an inept international criminal to be a good father? The film takes time to poke fun at that fact in this and other scenes. Overt sexual references weigh down what could have been a light-hearted film. Instead, it is inundated with sex—not actual sex scenes or actual nudity, but everything except Dr. Evil’s desire to take over the world is predicated on sexual arousal and intercourse.

There is one scene with an obscene character called “Fat Bastard” in which the audience, unfortunately, sees his bare chest and bare bottom. This, of course, is not anyone’s real chest or bottom. The actor is in a prosthetic fat suit, but the reaction from the audience is the same—gross. This character is the most revolting and disgusting and is used to make many of the crude jokes in this film.

The movie is cluttered with four-lettered profanity. Throughout Myers' character repeatedly refers to himself as a “sexy b*st*rd.” The Lord’s name is taken in vain when Dr. Evil, toward the end of the movie, exclaims “This is re-GD-diculous.” Dr. Evil launches a rocket that produces a big shadow over the Earth in the shape of male genitalia. At least 20 references for the male genitalia are given in brief scenes cut back to back as people all over the world gasp and try to explain the phenomenon.

The movie could also be dubbed a study in scatology—interest in or treatment of obscene matters especially in literature or the biologically oriented study of excrement. In the CIA’s crime lab, Powers mistakes a stool sample for coffee and drinks it. On the island en route to Dr. Evil’s secret lair, Felicity unloads a bag while Powers is bent over on all fours. From outside the tent, their shadows give the appearance that Felicity is pulling the ropes, balls, explosives, and other tools out of Powers behind. In one fight scene Minnie Me, Dr. Evil’s midget clone, rips a hole in Powers' space suit and seems to tunnel in Powers' behind. Powers relieves himself of the evil clone on the space ship’s toilet and sends him flying into space.

Beyond the sexual innuendo, crude and sometimes just gross jokes, this “Austin Powers” movie celebrates the “free love” philosophy from the 60s. In his own words he is a “swinging single” and hops into bed quicker than a wink with women he has just been introduced. Of course, Powers’ sex drive is part of the spoof on spy movies. For these reasons, I cannot recommend this film for a Christian audience.

Do not take the kids to see this one. This is college-age “humor” if you can call it that. I came out of the theatre promising myself that if there were a Austin Powers 3, I wouldn’t waste my money. My pastor gave our congregation a good “litmus test” for movies (and all things in general.) If you can’t say “Thank you, Lord” before, during and after a movie, then you shouldn’t as a Christian be watching it. I’m sorry I did.

Donna, age 37
…I laughed hysterically at this movie. Certainly I found things about it crude, but they were meant to be funny, not to make all Christians mad. Listen folks, you’ve got to realize something here—Hollywood is not on an agenda to tick off Christians. They are on an agenda to make movies and make them funny (if they are comedies, that is). I personally recommend this film to anyone who wants to enjoy a laugh…

D.B., age 35
Comments from young people
Every once in a while a film is made that: 1) isn’t funny until you see it with your friends and then talk about it… or 2) Is so stupid that it is hilarious (The finest example of this is the ever so cheaply made “Monty Python” movies). Austin Powers 2 could fall into either category depending on how you look at it. True, Austin does go back to his old life for a while and the movie was a bit worse, biblically speaking, than its predessessor, but Austin does choose to go back to the 90s and leave his 60s life in the end. What he does in the 90s we will have to wait and see. I wouldn’t doubt that Mr. Myers has another sequel in store for us. As for pure value though the movie was hilarious, but pretty crude…

J. Tingle, age 16
The review above covered both the plot of the movie and reasons not to see it (it’s very crude, it glorifies a lifestyle that is distinctly not in accordance with God’s will) very well. In my mind, though, it was not given credit for its one redeeming quality. It is incredibly funny. I have not laughed so hard in a movie for a while. Despite all the problems in the movie, I did find it fun and refreshing to watch it just because it was SO FUNNY. If you liked the first “Austin” or” Something about Mary” or “Ace Ventura” or any or that and are in need of a laugh, I would recommend this. If not, stay away.

Michael, age 17
I have heard many reviews on this movie. People say that it is supposedly worse that “There’s Something About Mary,” and that this movie barely slipped the R rating. Being a teen I honestly can say this is not for kids, although it will pass over most of their heads, and they will probably question a lot of stuff… but this movie was absolutely hilarious.

It was slapstick comedy, and poked fun of the 007 movies. I was smiling through the whole movie, and was practically in tears at some parts. Although there was much talk about sex, it was funny, and meant as humor and portrayed as the 60’s man that Austin is. I think that Mike Myers did the best job in this movie…

Jillian, age 15
“Austin Powers 2” is hilarious and even better than the first film. The jokes are funnier and the characters are unique (a two-foot evil clone and a massively obese Scottish Guardsman haven’t been seen in any movies I’ve watched). There are fewer “fish out of water” (Austin’s 60s mannerisms in the 90s) and sex gags, now many of the jokes rely on scatological subjects. Also in the story, the viewer gets a tiny glimpse of the sex-crazed world Powers left behind when he embraced monogamy (sic). There isn’t any nudity, which to some is a good thing.

Austin Powers, though crude, is not an evil film… [there is a scene where] Austin crosses himself, mentioning various parts of him to remember where to put his fingers (ie spectacles-head, testicles-hips, wallet-right shoulder, watch left-shoulder). In another scene, Dr. Evil exorcises a malfunctioning, rotating chair by yelling “the power of Christ compels you!” several times, stopping the chair’s mad movements. Also, Mike Myers, the actor who plays Dr. Evil, Austin Powers, and the ever-unpopular Fat Bastard [claims to be] a Christian himself.

All in all, despite its crude humor, Austin Powers is a film appropriate for all aged 11+.

Matt Quinn, age 15
…Austin Powers is glad to be in the 60’s at first. But he later decides to go back to the 90's. He even convinces Felicity to come with him. Obviously, Austin has matured and realized that the “responsible 90's” are better than the “free-love 60's.”