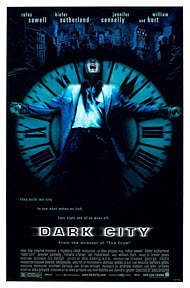 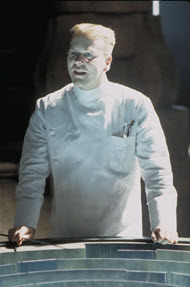 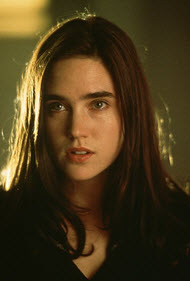 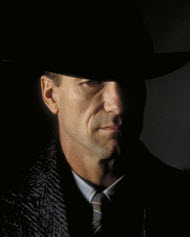 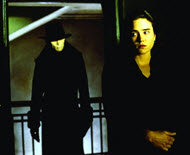 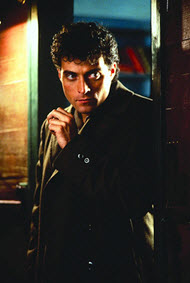 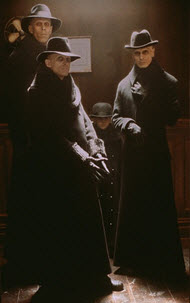 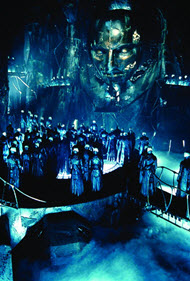 “They built the city to see what makes us tick. Last night one of us went off.”

The recesses of darkness he discloses,
and brings forth to the light.
—Job 12:22

“Dark City” is not a religious movie—far from it. The initial premise of space aliens searching for the human soul may strike Christian audiences as a wee bit demonic. Not to mention the title, which isn’t exactly inspirational. And yet, peel away this movie like an onion, and there are shades of the Book of Job in the Old Testament.

This puzzling and surreal film can only be described by the opening scene: A man named Murdoch (Rufus Sewell) wakes up naked in a bathtub. Upon regaining consciousness and finding some clothes to wear, he receives a phone call from a Dr. Schreber (Keifer Sutherland), warning him of impending danger. This “future noir” part, indebted to “Blade Runner” (1981), is one half of the movie.

Murdoch doesn’t know who he is or why he’s in danger; however, he eventually figures out that nightclub chanteuse Emma (Jennifer Connelly) is his wife, and that gumshoe Bumstead (William Hurt) suspects him in a string of murders. This “film noir” part, loosely based on 1940’s Bogart movies, is the other half.

The Book of Job states,

“In the night the thief roams about and puts a mask over his face; in the dark he breaks into houses. By day they shut themselves in, for daylight they regard as darkness.” —Job 24:15-17

Without giving away the plot, that’s a fairly accurate description of what happens in “Dark City”.

The visual tradition of “Dark City”, by director Alex Proyas and cinematographer Dariusz Wolski, is firmly rooted in the German expressionist cinema and painting of the 1920s. New Line Cinema is promoting this film to teenagers who liked Proyas’ “The Crow”, yet that’s a marketing technique that’s already lost some potential audience.

Surprisingly, this “R”-rated film is not too profane. There are two instances of brief nudity, neither of which are sexually suggestive. The violence is reserved for a Hollywood-formulaic shoot-'em-up ending. And, the good news: No profanity or swearing whatsoever (not even the Lord’s name in vain.) Recommended for discerning adults but not for kids.

I think “Dark City” is the best film of 1998. It is a wildly imaginative thriller that will make you think. Be sure to watch it in its original, widescreen format to get the filmmaker’s full vision of the film. I tried watching this film in pan and scan, and I must say, it was unbearable how some of the most important scenes were drastically marred.

Rick, age 22
I feel the movie “Dark City” was a big waste of time. I disagree with your review. You mentioned that there were only 2 nude scenes. Well, there was more than 2 nude scenes. Your review said that the nudity was not suggestive. I tend to disagree as in the movie a prostitute strips down to nothing. I think you goofed on this one!

Heather Rachar, age 37
I loved this dark and haunting movie. It is a visual feast of a film, full of great sets and special effects. The dark, film norish sets and designs lent a strange, but a thouroughly moody atmosphere to the film throughout. The characters were all very interesting and nicely acted. However, it was the story that really grabbed my interest. Sci-fi movies of late have never been this interesting, absorbing, or even original. The mixture of sci-fi, action, metaphysics, and even romance was refreshing and thought-provoking. In terms of its originality and quality, I hope this movie sets the trend for future movies of this kind.

Edward Lee, age 28
If you’re a fan of the movie “Metropolis” or the TV show “Twilight Zone,” see this film—you’ll love it. It is one of the most creative and strangely innovative movies I have seen in a long time, and it achieves this, thankfully, without being vulgar or crass. If you are an adult Christian who is a sci-fi /futuristic fan, you should go see this movie!!!

Leigh Dawson, age 38
This movie was thought provoking, but it could have been so much more. I found the plot to be intriguing, and there were a lot of interesting topics brought about for discussion on the way home from the theater. As with so many movies, the nudity was not important to the plot. It seems as though many things were not well explained. Perhaps it was the writer’s intent to allow the viewers to fill in the gaps.

Tim Jackson, age 18
“Dark City” is an intensely sophisticated film. It is an unique effort along the lines of “Kafka”, “Metropolis”, and “City of Lost Children.” But it is not just a grand-scale fantasy: it is also a puzzle, asking for intelligent audiences to actively think the whole way through (except perhaps at the shoot-em-up ending). It raises questions about memory, personality, self-empowerment, and will vs. fate.

There is also a very strong theme of individuality vs. drone-like conformity, and I feel the Strangers could very easily be taken as a metaphor for Nazi Germany: their visual style and their experiments seem to aim strongly in that direction. In this vein, the film starts off implying an empty void in the universe: there is no God but the Strangers: able to meld reality with their will, able to do anything if they focus their alien skills. Yet they seek to understand human souls, and to find where the soul resides.

At the end, the triumphant Murdoch taps his head and tells the Strangers they have been looking in the wrong place for humanity’s soul. The true soul, the film states, is in the heart. Where love resides. What other purpose does his “wife,” Emma serve if not to drive home that point? Who can forget the poignant scene of the shattering glass when Murdoch kisses her as though his life depends upon it?

Yet the film raises even one more important question: that of the unknowable and unpredictable nature of humanity itself, for Murdoch himself develops the power of the gods, and becomes like them: Adam eating from the Tree of Life.

S. Derien
I have recently seen “Dark City,” it was an experience I will never forget. The movie provided wild entertainment and a great fascination in the souls of humans.