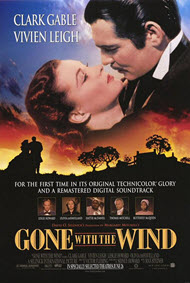 Having already endured almost sixty years of changes in Hollywood movie styles, “Gone with the Wind” is likely to last another decade or two. Descriptions like “epic” and “classic” are the only way to describe this re-release of the 1939 original. This movie still thrills us with its photography, special effects, and heartbreaking story.

Set during the Civil War in Atlanta and the surrounding South, the film actually begins just prior to the war. The lifestyle of white southerners is depicted as genteel and lush. All attention is focused on Scarlett O'Hara (Vivien Leigh), a spoiled, selfish debutante. Throughout the film, we follow her as she steals heart after heart, but never satisfies her own quest for true love. Scarlett assumes that only Ashley Wilkes (Leslie Howard) can satisfy her quest, but alas, he is in love with his wife Melanie (Olivia de Havilland). Not until it seems to be too late does Scarlett realize that her own husband, Rhett Butler (Clark Gable) fulfills her need for love. Scarlett never gives up, though, because “tomorrow is another day…”

The basic plot sounds simple, but the script is actually quite complex. We glimpse war, loyalty, honor, betrayal, prejudice, birth and death. It is amazing how much is packed into this three hour film.

While God is rarely addressed directly, there is nothing anti-Christian in the movie. In fact, the character of Melanie is quite Christ-like in her selfless living and gentle nature. The movie does, of course, contain one now infamous bit of profanity, some drunkeness, and references to adultery. Most troublesome, however, is the film’s depiction (or rather lack of depiction) of slavery as it truly was. This film is not a lesson in accurate history! Despite the lack of historical accuracy, this movie is appropriate for any audience that can sit through the duration.

Positive
I too enjoyed this movie. I found Scarlett admirable and strong when there weren’t men around. Then she turned needy and desperate. The charachters are great because they are complex. You really don’t know whether to love Rhett or hate him. I personally thought he was the greatest companion for Scarlett. I’m glad I saw this movie on the Big Screen. The colors were fantastic. Regarding the slavery issue, I’m sure it would have been made differently today. Political Correctness would have taken over style and grace.

Susan Keller, age 26
A great movie, to be sure, but not about a lady looking for love. The love of Scarlett’s life isn’t Ashley Wilkes or Rhett Butler—it is her land, Tara. She inherits this passion from her father early in the movie and, throughout much of the rest, marries and manipulates men who can help her keep her land. Tara is her past, her present, her identity, her birthright. And at the end of the film, it is back to Tara that Scarlett is going. Scarlett is not a perfect woman, and some of the things she wants—Ashley, for example—are not always admirable, but she is not a victim or a whiner, and she does take charge of her own destiny. For that I admire her.

Sharon Jones, age 34
recommended to all…
I found “Gone With the Wind” to be my favorite movie since the first time I saw it when I was nine. I think people of all ages should see it because it portrays true history. It showed how things were really like in the old South and how people treated their slaves. It showed how society was then and how things were much more conservative. It showed the relationships between the many characters and how chasing after something that doesn’t belong to you won’t make you happy. It showed the good quality of human nature and the bad. I recommend it to anyone and all people should see it at some point in their lives.

Becky Nosker
Negative
“a terrible role model”…
While I admire “Gone With The Wind” as a movie, I do not believe it embodies Christian principles. Scarlett is almost totally self-absorbed, and learns nothing in the course of her experiences. Nevertheless, she and Rhett are “strong” while Melanie and Ashley, who seem to have more morals, are “weak.” I decided not to take my children to the rerelease, partly because Scarlett is such a terrible role model.