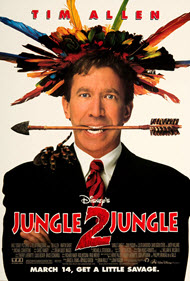 As a father, employee, author and teacher in my church, I have to admit that I have a deeply serious side. My business associates and acquaintances know that. But I also love fun, and anyone who knows me well knows that to be true! So, when I heard that Tim Allen (“Home Improvement,” “The Santa Clause”…) was the star of a new “family movie,” and that it was rated “PG” (rather than “PG-13” or “R”), I smiled. I noted the showing times. And I politely asked my beloved wife to be my date for the evening. (She loves fun, too!)

I had high expectations. Perhaps this would be a comedy which I would be able to chuckle through, emerge with a gut-ache from too much laughter, and endorse to my friends.

I chuckled. I emerged with a gut-ache, but…

“Jungle 2 Jungle” is about a commodities-trading big-city fat-cat (Tim Allen as Michael Cromwell) who must fly to South America to get his estranged wife’s signature on their final divorce papers. While there, Michael has to cope in a third world rain forest culture, and learns for the first time that he has a 13-year-old son (Mimi-Siku). Michael ends up taking Mimi-Siku to New York City, which naturally leads to lots of comedy (most of which is pretty predictable, and pretty flat). The self-serving dad soon introduces his loincloth-covered jungle son to his fiance, a clothing designer. In a series of incidents reminiscent of the “Crockodile Dundee” original from the early 1980’s, Mimi-Siku, the forest-foreigner, learns about the “Big Apple” the funny way, and sets out to fulfill an important promise which he made to his village chief. At the same time Michael, the unwilling “new” dad, discovers deep feelings and an others-orientedness he had never hoped to foster. (By the way, Michael’s clothing-designer fiance is not nearly as happy about his change of heart as his estranged wife.)

This big-budget Disney production had all the elements necessary for a truly fun, frolicking comedy. Instead the good folks from Mickey-ville have presented the world with an outstanding example of mediocrity. The script bordered on poor and was riddled with over a dozen profanities and expletives, plus such cheap/debase humor as Mimi-Siku peeing in public places, reference to “big boobs,” and other not-to-be-reinforced actions and attitudes.

Sure, this film had its good elements. But, in this reviewer’s estimation, the “good” certainly does not outweigh the free flow of profanity and coarse joking.

My husband and I really enjoyed this movie and found it to be very entertaining and comical. We would recommend it to anyone who just wants to sit back, relax and enjoy a good movie.

Dawn, age 29
Very comical!!!… The only thing wrong with the movie is that Charlett’s clothing was a bit imodest. Besides that I simply LOVED the movie. My favorite character was Marten Short. Tim Allen was funny but I have to say that Marten Short was the best!!!…

Danielle, age 12
I thought it was a good movie. This movie was however for younger audiences. Is it any wonder why the people that say they didn’t like it are all older? If your younger and just like to enjoy yourself in a movie this was a good one.

Jeff Davis, age 24
I went to the theatre not to learn anything, but just to be entertained. And I was not disappointed. Although not a gut wrencher, it was a very cute movie. Martin Short was great as Tim Allen’s sidekick. I didn’t find the humor vulgar, just appropriate for the situation. All in all, a fun family movie.

Pat Smith, age 28
I agree that Jungls 2 Jungle could have been funnier. My boyfriend went to the movie with me and pointed out several places that they could have gotten bigger laughs. I did find the movie amusing, though. Despite the fact that it was not a knee-slapper, it had more laughs than some so-called comedies I have seen. I appreciated the fact that it did promote family values when Tim Allen feels that it is more important to be with his son than to have his high paying job. I was also glad that a villian-role wasn’t made out of his girlfriend by putting her in the used up role of trying to exploit Mimi. Overall, just a “cute” movie :)

Layne Mattox, age 18
Very much agree with comments made by reviewer. I love Tim Allen and had high hopes for the film, but it just wasn’t that funny (the drugged cat scene did get some chuckles.) Was very disappointed in the way the relationship between the two kids was portrayed.

Donna, age 48
I loved the movie. I liked the monkey the best even though he wasn’t shown very much. I think it was funny because the tarantula was a different size each time. Tim Allen was very funny. He was mean to his son. I liked the end. I don’t think the kids should have kissed. I think it was a well-done movie.

christy, age 12
I love Tim Allen, and was so excited to see his new movie. I waited for the entire movie to have the opportunity to laugh or enjoy it, and was amazed at how poor it was. Really sad. It had lots of potential… a possibly creative storyline. Also, it was Disney’s typical lack of discretion to choose 12-year-olds to share a romantic relationship. We would like innocence protected a bit longer.

N M, age 43
I think that it was a good movie, BUT, there were some things that could be left out. I think they had a good storyline.