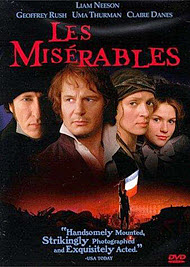 I have read lots of theology, but for my money the two greatest spiritual works of the nineteenth century are Les Misérables and A Tale of Two Cities. The pity is, both were written as serials and are too complex to translate easily to the big screen. That said, Les Misérables translated well to the big screen and did an excellent job cutting to the spiritual heart of the novel.

The movie focuses on the relationship of Jean ValJean, an escaped parolee and Inspector Javert, his nemisis. The story is about Grace, Mercy, and Justice. Grace is personified by the Bishop, who early in the story shows a fearful and disheartened Jean Val Jean true charity. This charity transforms a brutal man into a model of Mercy. Though still fleeing the police (in the novel this was more the result of a police oversight, than a decision), Jean Val Jean does good works wherever he goes. Jovert, Justice personified, hounds him wherever he goes. It would be too easy to think Javert evil. The laws he enforces may be brutal and stupid, but he did not make them. He strives to follow the law to the letter, even to his own detriment.

In the end, Justice (Javert) must sacrifice himself to save Mercy (Val Jean). This brings the viewer face to face with the sacrifice of Christ to pay the price for our sins.

This film does contain several scenes of violence, slight profanity (slang term for breasts), and material involving prostitution (though nothing more than cleavage is shown). Overall, I found this movie both cinematically and spiritually satisfying.

As a passionate fan of the musical version, I had serious doubts that this movie could ever convey the same emotional intensity of the stage version. I was absolutely blown away. Neeson is extraordinary as the model of virtue. Rush abolishes the classic villain image of Javert, making him a round real man, whose harshness is nearly pathetic. He lacks what Veljean has found—a savior.

The whole film is elegantly tragic, they don’t hide the ugliness and cruelty, they show it. And that is what makes the triumph of Veljean (and mercy and goodness) so overpowering. This is the first time I have ever felt a spiritual high from the classic tale. Neeson gentleness is a great standard, Christians everywhere should be so willing to forgive the Javerts in our lives.

J.I.L.
I thought that this movie was wonderful!!!… I had never seen the play or musical and had no idea what the plot was. I found ValJean’s spiritualism highly enlightening. He knew where he was in the eyes of God and just wanted to be the new man. After I watched it, I wanted to run out and buy the book. I want to know, did they go to England, what happened after?

Anon.
I find that I rarely go to the theater anymore. As a pastor, I teach people to be careful what they fill their minds with. Phillipians 4:8 tells us to think on things that are excellent, praiseworthy, admirable, pure, noble, etc. Despite the few sexual comments to the prostitute, this is an excellent film with much to recommend it. I could not watch it without thinking about God’s grace and mercy and forgiveness towards me.

Steven Pennell
I was encouraged by many scenes in this movie. The scenes between Valjean and Javert were excellent. Javert dogged Jean Valjean for decades and did his best to make the man’s life miserable. Yet Jean forgave him (and demonstrated forgiveness to others, even when the law mandated vengeance) time and time again. What better example of Christ-like humility and mercy, following His command to love our enemies. I especially liked the scenes between Valjean and the dying Fantine. In one he assures her that in the Lord’s eyes, she is only one of his beautiful children that He loves dearly, despite all of the failures, filth and despair of her life. Such an exhortation is rare in Hollywood-produced films. Rarely will you see genuine mercy, forgiveness (as opposed to vengeance, a common theme in recent movies), grace, or real love in Hollywood. Don’t miss the opportunity to see them and go see this movie.

Dennis D. Johnson
Excellent! Stunning! My wife and I were enthralled at this excellent production. True to the book, this story shows the power of God’s redemption! Time and time again we were amazed at what a positive influence this movie has the potential to have on its audience—Christian and non-Christian alike!

Tim and Naomi Cowley, age 24
I really liked this movie for the simple reason that there was no profanity or obscenity. It had a plot, a theme, and a story. What a wonderful change from today’s ordinary movie out there!

M. McGonegal, age 49
I had heard of the play but was not familiar with the plot prior to seeing the movie. I went to see it because of the play’s reputation.I’m very glad that I did get to see this movie. I’m currently taking a course on values communication at a Christian College. The course deals with ethics. Les Miserables should be included as part of the curriculum.Repeatedly Val Jean encountered situations that required ethical decisions. Inspector Javert also had to decide his loyalties. The interplay between the two characters is excellent. The plot is excellent. I highly recommend this movie.

Yvonne, age 39
I went to see this movie with a couple of friends and really enjoyed it. I thought that the part at the beginning when the Bishop gave Jean ValJean all that money in silver, saying that now the grace of God had bought Valjean’s soul, was really signifigant of how Jesus gave his life so that our souls were saved. I also think that they did an incredible job of interpreting and transfering the Novel to the big screen.

Gregg
While the current version is a fairly good adaptation I felt that it had somewhat of a 90’s touch, especially the scenes between Cosette and Val Jean. The scene of Jean Val Jean’s conversion is missing; one assumes that he had a Christian conversion after returning to the bishop and being placed in the hands of God. Personally, I liked the 1978 TV version better.

burnside
My husband and I had never seen the musical or read the book, so we only knew what we read on this site. We were very pleasantly surprised by how well done this movie was. The main character showed Christian love to everyone. It was obviously with God’s help that he did not kill the inspector when he had the opportunity to do so. Sad to say, there were only about 20 other people in the theater to see this movie when we saw it. We are recommending it to all of our friends as a movie well worth the time and money.

Donna
It’s important when reviewing this film/story to stress the ignorance portrayed when a character defiles herself in prostitution because she believes she must in order to make money. I have found this to lessen the impact of the whole plot. The false notion is influencing in a very negative way.

Mrs. K. Fallot, age 23
Having seen the broadway musical 8 years ago, I wondered how well the story would translate to the screen. I was plesently surprised. My wife and I agreed that Liam Neeson was perfectly cast for the role of Jean Valjan. I agree with the reviewer that this is an excellent film for Christian adults to see. The story is rich with spiritual truths and allegories.