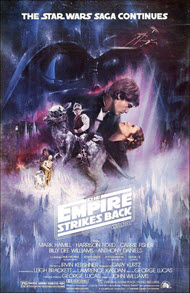 “The Empire Strikes Back: Special Edition” is the second movie in the “Star Wars” trilogy to be re-mastered and re-released in 1997. The Special Edition includes an improved soundtrack, better digital effects, and a few extra tidbits of added footage.

“The Empire Strikes Back” picks up where “Star Wars” left off. The Imperial forces (the bad guys) have been set back by the destruction of their Death Star, but are all the more furious and committed to the obliteration of the Rebels (the good guys), who are fighting for peace and freedom in the galaxy.

Many critics view this as the best of the “Star Wars” trilogy of movies, and I won’t disagree. The producer/director, George Lucas, had much more money when he filmed this movie than he did for the previous one, and it shows. “The Empire Strikes Back” has a better plot, better acting, and is—overall—the best!

The “force” is explained a little more in “The Empire Strikes Back”. It is a god-like energy field which surrounds all who live in the galaxy. There is both a “good side” and a “bad side.” The good side is peaceful, honest, just, etc. …while the bad side promotes hate, anger, etc. As a being lives, he/she/it must choose between the good and the bad. This philosophy should be explained, especially to younger viewers, as only partially true. While choosing good over evil is important for the present life, it does nothing in helping you in the eternity which awaits. If you want to live with the good rather than the bad for eternity—rather than just a few decades—you must choose Jesus! (See John 14:6, John 3:16, Romans 3:23, 6:23, 8:1, …and other related passages in the Holy Bible.)

The MPA rating of “PG” is basically given for the “science fiction style” violence; laser blasts, flying ships blowing up, beings who get killed, etc. There are also a few profanities.

Should you go see this film? In my opinion, yes, yes, please do! It isn’t often Hollywood re-releases a good, clean movie for family viewing. The special effects are great, and John Williams' music score in this one beats them all!

EDITOR’S NOTE: We encourage you to view the Motion Picture Association of America’s rating—in this case, “PG”—as a bare minimum standard. Because the MPA’s rating system is based on the ever-changing norms of a society in flux, it does not reflect a Bible-based standard. PG means “Parental Guidance” suggested and even the MPA encourages parents of pre-teens be very discerning when it comes to PG films and those under 13 years of age.

Know as the best of the trilogy, Empire Strikes Back also has two scenes that indicate religion. First there is the scene on Hoth where Han Solo is about to take out a Tauntaun to find Luke. An officer comments that the beast will freeze before it reaches the first marker and Han responds, “Then I’ll see you in Hell.”

The second scene is between Darth Vader and Lando Calrissian on Cloud City. As Vader continues to change his mind about what is to be done with the princess and Chewie, Vader states to Lando. “Pray I don’t alter them (the plans) any further. As a die-hard fan to the Trilogy I recomend all Star Wars Movies.

Karen Cerino, age 19
…I agree with the person who compared this movie with Zen rather than Christianity. Being one with force, levitation with the mind, and other such powers are very occultic and VERY ungodly. In a book I read not to long ago on the occult the author pointed out how much Yoda resembled a picture of a demon in an occultic book. I really don’t think that was a mistake.

All in all this movie is full of the occult and even though there seems to be a lot about this good force remember this… And it is no wonder. Even Satan tries to make himself into an angel of light.” 2 Corinthians 11:14.

Mrs. Hope Krumal, age 19
This movie is a movie with great special effects, even before the new added features. As a christian I think that this movie is good to see, if you watch it with the point of view that the force is God’s mighty power defeating the works of the enemy and doing unimaginable things (healings, salvation, etc.).

Travis Tietsort, age 22
I didn’t get a chance to see “The Empire Strikes Back” while it was on at the theaters, but I did get to see “Star Wars” and I’m planning on seeing “Return of the Jedi” now that it’s out. I know there are a lot of things we could read into these movies regarding New Age beliefs, etc. …But when I went to see Star Wars I was just so pleasantly surprised to actually see a movie without any nudity or cussing or extreme gory violence. I really enjoyed the movie and was pleasantly surprised that the film industry would even release a film now days without having all of the above in it. I left the theater with a smile on my face!

Elise Griffin, age 25
I think that this really was the best of all 3 films. I have them at home, but I wanted to see the new special effects (which really made the movie so much better) and the fact that it was on the big screen and had better sound. For days afterward I couldn’t get the Star Wars theme and Darth Vader theme out of my head. The movie also gave me chills (and believe me, when a movie gives me chills, it’s a good movie).

Plus, the fact that there was no swearing or nudity, made it better. Most movies now aren’t like that, and still millions of people came to see it. It is probally my fave movie.

Julie Kingsborough, age 14
I went to see the movie with a friend and thought it was pretty good. It didn’t keep me on the edge of my seat as much as others, but it great wonderful effects. If you’ve got the time, see it.

Aaron Thrush, age 14
What is there to say? If you like Sci-Fi GO! If you saw it 15 years ago—GO! If you have never seen it GO! (but go see Star Wars first!) To the concerns about Zen-Buddhism and etc. I would like to add that most religions whatever they may be, have a common theme-good vs evil-the christian can take these very themes and insert them… We can do ALL things through CHRIST who strengthens us, Jesus is the “force” that binds, Jesus has power and authority over ALL powers and principalities… I do understand the concern and think it is right to be so-especially in light of the worlds embracing of these “New Age” ideas… It’s something to think about… All I can say is that I enjoyed seeing them in the theater again and revisiting a part of my youth!

Karen, age 33
I changed my mind about seeing “TESB”. I am going to see “ROTJ” with a visiting relative next week and I think that the best thing about this wave of movies is that millions of people are going to see a movie that has no profanity, nudity, sex or gore. The only problem is that while “TESB” is the best-written and the most exciting of the trilogy, “ROTJ” focuses less on the Yoda character, who is a tad ANNOYING and looks WAAAAAAY too much like Buddha.

Michael C., age 15
When I was in the world I loved Star Wars Movies, but since I became a born-again Christian, I have a mixed feelings about its new age theologies. Do these movies draw non-Christians closer to Jesus Christ or Zen-Buddhism? Still, these are hard movies to dislike.

Shuichiro Nomura, age 29
Since I am sort of a Darth Vader with glasses, stuck in limbo, I don’t think I will see this again. I remember seeing this before I was a Christian as a young man. Frankly, the movie would scare me…

Sterling Levell, age 34
It’s really interesting to see how much the Star Wars Trilogy parallels Christianity in some respects. In some circles people might believe the Lucas was trying to represent some kind of post-modern futuristic Christianity. The one thing that stands in the way of accepting this is that God is a personal God not a impersonal force as the movies present. Nevertheless, Empire is very enjoyable.

Bill Royce, age 22
I think that this movie was great. Even though the “Force” thing is a big issue, I think You can get a lot out of the Cristian side of it. I’ll Never forget the scene where Luke try’s to witness to Han Solo, and he says he can’t believe that one almighty force can rule the galaxy. Or when an Imperial General says “Your devotion to that long dead religion…” It reminds me of how the world views me, and helps me stick to my beliefs. If you don’t look for the good side to every movie, you’re not going to enjoy it.