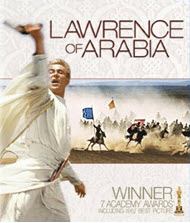 “Lawrence of Arabia” (winner of 7 Academy Awards, including best picture—1962) is the story of T.E. Lawrence, a lieutenant in the British army in World War I. The film follows Lawrence from his humble beginnings as a cartographer in the Cairo HQ, to the end of WWI, when Lawrence has been promoted all the way to colonel and is the hero of the Middle-east. It is a story of the beginning of the Arab nations and of personal triumph. It is also the story of how ambition and pride can destroy a man’s soul.

This classic film took over two years to complete, and is a monument of excellent cinematography and acting. Peter O'Toole stars as Lawrence, and he is joined by a cast that either were already great stars or would soon become stars: Sir Alec Guinness, Anthony Quinn, Omar Sherif, and many others. These great actors play against the backdrop of the vast Arabian desert, as Lawrence tries to gather together the various Bedouin tribes and make them into an army to fight the Turks.

This film contains quite a bit of violence, including an execution, a caning, and a massacre. Of course, there are also battle scenes, but none of these scenes are depicted as graphically as they would be today. Lawrence is something of an egomaniac, but his personality and the problems it causes him make an excellent tool for discussion of how men can destroy themselves when they do not rely on Christ for their strength.

Everyone should see this film… eventually. It is not for small children, but teens can probably handle it. Besides being a masterpiece of film making and acting skill, and a wonderful tool for discussing the pitfalls of pride, it also sheds a lot of light on the origins of the modern problems in the Middle-east.