Today’s Prayer Focus
A Man for All Seasons
MPA Rating: 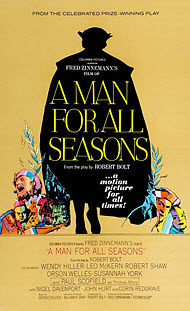 The story of Sir Thomas More, Roman Catholic Saint and Martyr for Christ, is both inspiring and cinematically excellent. From the world’s point of view, the movie garnered 6 academy awards after it was released in 1966, including best picture, actor, and director.

More (Paul Scofield) was an influential official and intellectual in the court of Henry VIII (Robert Shaw). The movie focuses on a critical period in history, during which the King sought to divorce his first wife, who could not produce a male heir, in order to marry his mistress, Anne Bolynne. When the previous chancellor (something of a cross between a chief of staff and a prime minister—played by Orson Welles) is released for failing to pave the way for the divorce, the king calls on More to take the position. Upon taking the job More must decide between political expedience and his moral convictions.

The movie inspiringly portrays of how God can sustain those persecuted for his name’s sake. It also shows how triflingly small a compromise can appear to the world—that it is rarely a giant leap, but more often a series of small steps. “A Man for All Seasons” reminds the Christian that the cost of the calling of Christ is very dear.

This movie contains a few mild profanities and use of the Lord’s name being taken in vain. Such language comes from characters that we would expect to use it, and it draws a contrast between More’s virtue and their recalcitrance.

If you have not seen this film, I heartily encourage you to do so. Although it might be a little heavy for preteens, teenagers will have no difficulty understanding and appreciating it, especially if they have ever encountered situations of peer pressure. “A Man for All Seasons” is a movie for all seasons.

(Note: There is also a 1988 Turner Network version directed by and staring Charleton Heston. While not as powerful as the 1966 version, it is also quite respectable.)