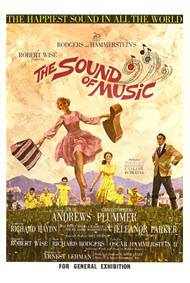 This film (“Best Picture” Oscar®—1965) is definitely one of a kind—a pro-family, anti-totalitarian Rogers and Hammerstein musical drama based on a true story. Memorable numbers include the title song, “Edelweiss,” and “Climb Every Mountain.”

Free-spirited Maria (Julie Andrews) is temporarily reassigned from her Austrian convent (before taking her final vows) to serve as governess to the seven Von Trapp children. Their widowed father (Christopher Plummer) is a former Navy officer and runs a tight ship at home, even calling each child with a distinct sound from his whistle. The children take out their frustration on the governesses, and none of them have lasted long. But Maria has a special touch and can do just about anything, including giving the children and their father back to each other. Maria gets along splendidly with the children; but when she senses that she’s falling in love with Captain Von Trapp while he’s courting someone else, she honorably resigns her position. The Mother Superior forces her to go back to her governess assignment and face her problems. It turns out that Captain Von Trapp feels about Maria as she does about him, and eventually the other woman withdraws in favor of Maria. Now the only obstacle to the family’s happiness is the fact that Nazi Germany has “absorbed” Austria into the Third Reich and the Captain has been re-commissioned into the German navy—a position he will never accept.

This film itself is even more amazing than Maria’s character in that it manages to deal with all kinds of serious life issues, even the Nazi angle, without being offensive to younger viewers. The scariest content is the menacing, threatening nature of some of the Nazis; no one is actually killed or injured, and the ending is triumphant. If you and your family have never seen this film, I recommend that you do.

Positive—I never saw this movie until I was in my 30’s, and now I wish I had. It is my wife’s favorite movie, and I sat with her on our anniversary to watch it, I was most impressed! My 4 year old daughter also loves it (over and over again!). It is a timeless masterpiece for ALL ages. My Ratings: [4½/5]
Rob Owensby, age 37
Negative—Family entertainment at its blandest, and so sugary sweet, I thought I would come down with diabetes. Some of the songs are okay, but I recommend this for families with kids under 12. Older teens might find this a little too corny for their tastes (and some adults as well). My Ratings: [4/2]
Hillari Hunter, age 37
Positive—I also have to disagree severely with Hillarie Hunter’s assessment of this movie. I have watched this movie 5-10 times, several of them with my daughters and never get tired of it. My daughters are 10 years apart and so it has brought out different questions from each of them. We all love it and love the singing. That’s almost the best part. The best part, to my mind, is the triumph of good over evil and the message that all of us do count. Rather like “Schindler’s List”—one man DOES make a difference. My Ratings: [5/5]
Rita Mack, age 53
Positive—Hillari Hunter is way off mark. In 1982 I went to Salzburg, Austria where it was filmed. Being there was a moving experience, it was amazing that after 17 years of its release that it was so much alive, as if it had just been filmed the day before. “The Sound of Music” tour was just as exciting as the movie, you should have heard the people in excitement as we all witnessed this part of music, movie, and World War II history. It is one of those amazing stories that must be told and retold, that love conquers all. There is a reason why this movie is timeless, sugary is not one of them. My Ratings: [5/5]
Daniel Jette, age 36
Positive—I can’t let Hillari Hunter’s comments go unchallenged! This is without question one of the best films ever made! I’ve watched it over and over again and never tire of it. If you’ve never seen this classic, I highly recommend it! I also recommend Maria Von Trapp’s book upon wich the film is based. My Ratings: [5/5]
Timothy Blaisdell, age 36
Comments from young people
Positive—I am serious, this is the best movie ever!!!… I think everyone in the whole world should watch it!!!
My Ratings: Moral rating: Excellent! / Moviemaking quality: 5
Liliana, age 11 (Canada)