This is a Middle English name for various birds of prey, including buzzards, and especially European kites. It comes from the Old English glida—akin to “glide.” 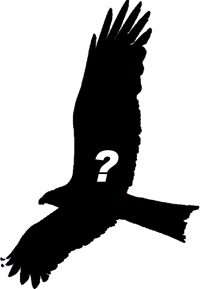 The Hebrew name is from a root meaning “to see,” “to look,” thus designating a bird with a keen sight or that does much looking. However, those traits are present in most, if not all, birds of prey.

The original Hebrew word raah apparently refers to some bird of prey, but its exact identity is not certain, and the word does not occur in the parallel passage in Leviticus 11:14…

And the vulture,
and the kite after his kind (KJV)

Others suppose that the word raah is not a scribal error and refers to a different kind of kite, such as the red kite or black kite. Others suggest that the bird intended is a buzzard, of which there are three species found in Israel.

The meaning of the Hebrew word dayyah is also not totally clear, either.

Whatever the raah was, it was considered unclean for the children of Israel and forbidden as food.