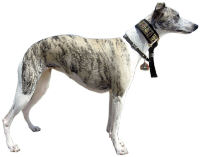 “Greyhound” is the King James Version translation of the Hebrew words zarzir mothnayim, meaning literally “one girded in loins,” used in Proverbs 30:31. Verses 29-31 list four things that “go well” and are “comely in going” (beautiful and lovely to look at as they walk with dignity/majesty). The others things listed are: a lion, a male goat, and a king at the head of his army.

Other versions and interpreters translate this ancient Hebrew term differently:

It is uncertain what specifically is referred to by the words zarzir mothnayim in Proverbs 30:31. The Literal Interpretation of the Holy Bible simply says, “one girded in loins”. Strong’s Hebrew and Greek Dictionary says this about these two words: “zarzir” (zar-zeer) means properly “tightly girt,” that is, probably a racer, or some fleet animal (as being slender in the waist) / “mothnayim” (mo'-then): “From an unused root meaning to be slender; properly the waist or small of the back; only in plural the loins.”

The fast and graceful greyhound was known in ancient times, at least 3,000 years before Christ. Its image appears in Egyptian tombs.

“It is most likely that this was the greyhound, which in the East are remarkably fine, and very fleet. Scarcely any thing can be conceived to go with greater fleetness, in full chase, than a greyhound with its prey in view: it seems to swim over the Earth.” (Adam Clarke, Commentary on the Bible)