Does ET really exist?
A study of the alleged “Martian” meteorite

See this page in: German, Indonesian 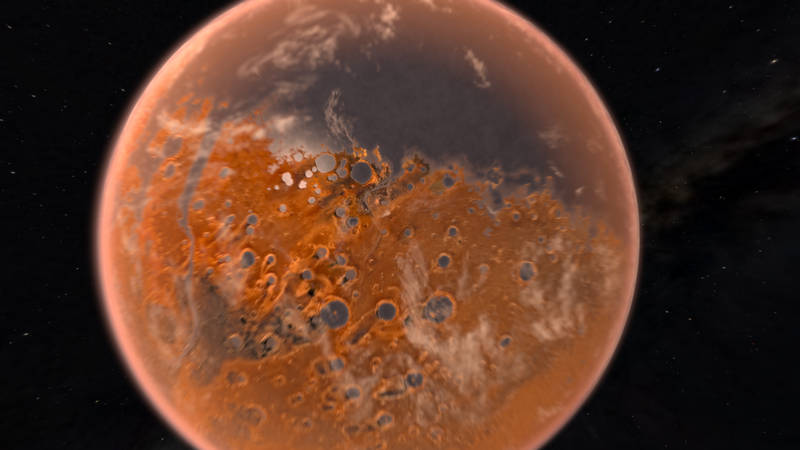 On August 7th, 1996, NASA (America's National Space and Aeronautics Administration) made a surprise announcement that was quickly reported throughout the world. Almost every news service, national and local news program, newspaper, and talk show soon discussed this “discovery of the century.” Scientists throughout the world have been accepting hasty media interviews on the subject and excitedly saying some very foolish things—without actually having read the research papers. Some would have us believe that man evolved from these “seeds” blown from a distant planet. Others boldly say we now know that the whole universe is populated with living creatures of every description.

Has the existence of extraterrestrial life finally been proven?

Certainly not, here are the facts.

Discovering life on another planet is the “Holy Grail” of many modern scientists. Annually, millions of dollars are spent on the search. Year after year, absolutely no evidence has been found. Now that this unusual meteorite has been examined, these scientists have a tiny shred of evidence of a tiny bacteria—but the slimmest, weakest, most insubstantial of evidences. One wonders if the purpose of this announcement was more than anything else, another attempt by NASA to reap more taxpayer money. NASA has been doing a lot of public relations publicity recently—on the airwaves, the Internet, and in Congress—trying to justify their huge budget for extraterrestrial exploration and ignite the public's imagination and support.

[To read our answer on the biblical position on the
possibility of extraterrestrial life, click here.]

What was actually found?

Since 1969, when the first meteorite was picked up in frozen Antarctica, researchers have annually returned to collect more specimens. One of these rocks, found in 1984, was recently examined in painstaking detail using one of the world's finest electron microscopes and the world's most sensitive mass spectrometer. This igneous rock weighs about 4.5-pounds and is about the size of a potato. The researchers involved claim that this meteorite landed in Antarctica 13,000 years ago, leaving us with evidence of bacteria dead for some 4.5 million years. [All of the age estimates in this story are based on questionable Evolutionary theories. We highly doubt their accuracy.]

Although many people following this story have made the leap from single-celled bacteria to intelligent life forms, please note that no living animals, plants or people were discovered. Nor were some tiny petrified single-celled creatures discovered displaying to the microscope their cell structure. What has been found are elements and chemicals common on Earth. The scientists' case relies heavily on chemistry and is rather complex. The supposition is that these materials could have been left behind by the decay and/or burning of tiny bacteria that once lived in water in the fractures and pores of the rock. In reality, every chemical found in this rock could have been created by natural processes that don't involve life. Some could also conceivably have been produced by Earth organisms. 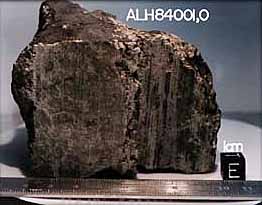 A MARTIAN ROCK? Found in an Antarctic ice field, the research team involved is confident that the meteorite in question (Identification #ALH84001) is an igneous rock from the crust of Mars. Why? The supposed 4.5 billion year old gases trapped inside the rock's tiny pores reportedly match today's atmosphere on Mars extremely well—as measured by the Viking Lander (argon-36, argon-40, xenon, krypton, neon, nitrogen, carbon dioxide, etc.).

Is this Martian identification a sure thing? No, there are certainly indications that the identification is correct, but it is not a certainty. To be ejected from Mars gravity, the rock would have to have reached a speed more than five times the muzzle velocity of a hunting rifle. Some very large objects have obviously hit Mars, so this is not impossible. The sun's gravity would draw an object like this in our direction. At any rate, the amounts of gas involved are small, and various assumptions have been made in guessing this volcanic rock's history. Mars may well have been the original source of this rock, but some would like to see more definitive proof. If the rock was blown off Mars, the fractures (in which these bacteria supposedly grew and formed) seem more likely to have been produced by the impact that shot the rock off the planet.

HOW OLD?!? These scientists are claiming that this volcanic rock crystallized from molten lava 4.5 billion years ago. Not long after, it is supposed to somehow have become infested with bacteria. Then the rock got blasted off the planet by a huge comet or asteroid impact with enough force to escape Mars gravity. Next, it floated in space for 16 million years (based on cosmic ray exposure data), and then landed on Earth 13,000 years ago.

THE EVIDENCE INSIDE THE METEORITE. According to NASA's David S. McKay, it is only the fact that the following four items were found together in one location that suggests life was once present in the rock.

The researchers concluded their Science magazine article by saying that "although there are alternative explanations for each of these phenomena taken individually, when they are considered collectively, particularly in view of their spatial association, we conclude that they are evidence for primitive life on earthly Mars."

Did these materials get into the rock through contamination on Earth?

The scientists involved say it is unlikely because:

Are these materials clear indicators of prior life in this rock? Definitely not. Finding all four items together was merely suggestive of life, not a proof. As the researchers involved admitted, the presence of these materials (even altogether) could be explained by natural, inorganic processes. The research team also agreed that some of the material could have been deposited in the rock on Earth by living things or natural processes. Although Antarctica is harsh, there is life. Scientists never cease to be amazed at its tenacity and ability to surive incredibly harsh conditions. The research team claimed that these explanations were unlikely based on their inability to come up with a fully viable explanation for all of the evidence—based on what they believed to be true about Antarctica and its past.

The director of the Institute of Meteoritics (University of New Mexico), Jim Papike (a geochemist), revealed that the rock failed a key test for biological activity. When pyrite is subjected to bacteria the ratio of its sulfur istopes (32 and 34) change. "We wanted to know if these pyrites in Martian rocks would show this fingerprint of life that would be indicated by a specific type of ratio," says Papike. "When we looked at the ratio, there was no evidence that it was in a ratio for life forms." [For details, see Geochimica et Cosmochimica Acta, a scientific journal]

In the final analysis, extraterrestrial life researchers need to find something a lot more definitive than these materials in a rock to prove the existence of life on Mars. They need to find something like DNA or cells or tracks—something that can only come from living things—and they must link the find much more firmly to its source of origin. There is still no proof that any life ever existed on Mars or any other planet. In fact, all of the planets (except Earth) are highly inhospitable to life with vastly different atmospheres, concentrated poison gases, horrendous temperatures, deathly gravities, and the like.

Not unexpectedly, NASA has busily been spending millions (perhaps billions) of dollars to send a series of space craft to Mars. In one masterful stroke, they put Mars exploration on the front burner. Sometime after 1997, they intend to land the Mars Pathfinder on the Martian landscape to search for clearer evidences of past life. Of course, the robotic vehicle will not be capable of actually seeing nanobacteria or tiny fossils. The much-touted mission will merely try to determine if there are Martian rocks that could conceivably contain fossils. Previous missions have found nothing but absolute sterility. It is not until well after 2000 that a mission may be able to return rocks to Earth.

To our knowledge, the only life in the universe was created on this beautiful and abundantly provided for planet we call Earth.

Copyright © 1996-98, Films for Christ, All Rights Reserved—except as noted on attached “Usage and Copyright” page that grants ChristianAnswers.Net users generous rights for putting this page to work in their homes, personal witnessing, churches and schools.