What if I don't like the way my spouse deals with the kids and I'd rather do it myself? 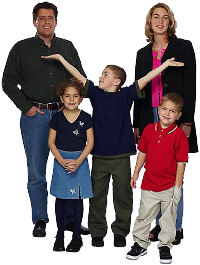 JOSIE (a parent, asks): Sometimes I try to turn the kids over to my husband, but I have a problem with it because I don't like the way he treats them.

KEVIN (Dr. Kevin Leman): Ah—that's a whole other story. What's he doing that you don't like?

JOSIE: One major thing is that he just discounts their feelings. When they try to tell him how they feel, it doesn't matter. He just says, “You do this right now,” and that's it. He is what you call “very authoritarian.” What he says goes and it doesn't matter how the kids feel.

KEVIN: So what if that's the way he deals with them. I'm not trying to be flippant. I'm just saying, “So what?” If that's what he's going to do, let him do it. At least he is parenting the kids and you're not carrying the whole load yourself. Besides, kids are resilient little buzzards and they can learn. When they're around Dad and he says, “Do it because I said so and I want it done now,” the kids will learn to jump to it. With you they learn a different kind of responding because Mom is obviously more understanding of how they feel.

JOSIE: Yes, but won’t that breed what you always call inconsistency?

KEVIN: Yes, if it goes on indefinitely, it probably will. But right now we’re talking about getting your husband involved. You re going to have to stand back and let some things go by that you're not real pleased with at first.

RANDY (Randy Carlson): That's right. In fact, you need to point your kids back to Dad when they come to you complaining that he doesn't understand or he's “mean.” Say something like,

Honey, I understand you're upset and you feel as if Dads not listening, but he's really the only one who can help with this one, so I suggest you go talk with him again.

Then really encourage them to follow through. Its important for the children to start expressing to Dad how they feel about his discipline and his lack of interest in their feelings. If you really are concerned about something he's done, talk to him later when the two of you are alone. Or, write him a note, but don't start arguing with him in front of the kids about what he is doing.

KEVIN: Exactly. If you start letting him take a more active role in parenting, and then turn around and harpoon him from left field, hell back off and hand all the parenting back to you. Take him aside and talk to him about the children's feelings and encourage him to try to listen to them a little more. But at the same time, let him know that you're glad that he's being a dad who wants to be firm and stick to his guns when trying to correct the children. Its a matter of give-and-take.