PARENTING TIPS ON GRANDPARENT’S VIEWS—Do grandparents who criticize the way you parent ever change? Does it really pay off to stand up to them? 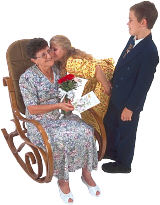 A parent asks: You gave some advice that my wife and I took to heart. My mother-in-law was with us when the whole family went out to eat the other night. Our son—who is eight—got a dish of fruit with his meal, and he was picking through it, eating some of the fruit, but not the rest. In fact, he did that with the whole meal, and barely ate half of it.

All we said was,

Eat what you want. If you don’t want to eat it, fine, but when we get home, that’s it.

We finished the meal and went back home, and we barely got in the door when he said,

Well, could it be because you didn’t eat your whole dinner? We’ll see you at breakfast. You’ll be able to eat then.

My mother-in-law instantly got upset. She went into the kitchen, opened up the freezer, and pulled out three little chocolate covered ice cream balls.

When we saw what she was doing, I took our son out for a walk on the patio, and my wife took her mother aside and told her then and there that we weren’t going to have that tonight. If she felt she had to extend the rules when the children were at her house, that was one thing, because we wouldn’t be around. But when our children are at our home, we will discipline them the way we see fit.

Randy: It makes me feel good, Mitch, to hear you say you were willing to stand up to your mother-in-law. Parents must remember that they are in healthy authority over their children, and they alone are ultimately responsible for how their children are parented.

Sometimes communicating that—particularly to a grandparent—can be difficult. Whatever you say, however, it helps not to be overly harsh on grandparents and to cut them some slack, if at all possible.

Kevin: I agree on not being harsh with grandparents. They usually mean well, and they’re the best support system most moms and dads have.

I hope there will be a day when Mitch and his wife can convince Grandma not to spoil her grandson whether he’s in his own home or at her house. But until that happens, Grandma has to know that she doesn’t rule the roost when it’s his home and his set of rules.

Randy: From the different questions we’ve dealt with, it is obvious that the more united parents are on the discipline front, the more successful they will be. When grandparents disagree with parents’ disciplining of their kids, it can get confusing. When parents themselves disagree, then it can really get crazy. Kids smell that in a minute and just start playing one parent against the other.

Moms and dads should do all they can to set down some principles and rules they both agree on. And they should continue to communicate—check with each other every now and then to see if there is anything that one is doing that bothers the other. Parenting works best as a team operation. When Mom and Dad work as a team, they’ll win a lot more than they’ll lose.