If I haven’t used Reality Discipline before, can I just start “cold turkey,” or should I ease into it slowly?

ANN [a parent]: I have two boys, nine and seven, and a little girl, three. I can see using Reality Discipline with her, and I've already started, but what about my boys? They're the typical, strong-willed type. They are constantly giving me a bad time, particularly with not wanting to get ready for school. Both of them are night owls—bedtime is a battle, too, and when it's time to get up, they just don't make it and every morning it's a hassle.

KEVIN [Dr. Kevin Leman]: You can start “cold turkey,” and you can start without apology. You might say this much to your boys:

Boys, things are going to be different from this day forward.

End of explanation. Don't give them a lot of warnings about if they misbehave they're going to have to pay the consequences, if they don't get up on time, they're really going to get in trouble, and so on. When Reality Discipline is used correctly, there are no warnings—none—because warnings are disrespectful acts. 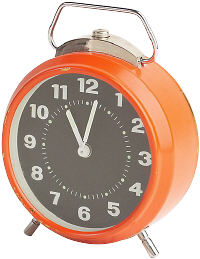 RANDY [Randy Carlson]: For kids who don't want to get up for school and morning is a hassle, we usually have one basic solution: be sure the child has an alarm clock and knows how to use it. Then tell him,

It's your responsibility to set your alarm and get up in time to clean up, get dressed, get breakfast eaten, and leave for school on time.

If your child says,

But Mom, aren't you going to help get me up the way you always have?

From now on, it is your responsibility.

And leave it at that. What your child is probably used to is having you poke your head in the door in the morning and say, "Honey, it's 7:20," and five minutes later you're back again saying, "Honey, it's 7:25." Then, when it's 7:30 your voice increases in intensity and instead of calling the child, “Honey,” it's "John Allen! You've got to get up for school or you're going to be late." When the kid hears his middle name, it's probably the first time he even begins to stir. Now he knows that Mom is getting upset and that he's pushed her as far as he dares.

ANN: But what if I give him the clock, and make him responsible to get up and he doesn't? What then?

RANDY: Then he's going to be late. No rescuing him by driving him down to school. And no writing him an excuse. Send a note along, but simple have it say,

The reason why little Harlan was late today is because he didn't get himself up for school on time. We have made this his responsibility and he is totally responsible for being late today.”

KEVIN: Letting your child be late for school a few times may be embarrassing. You might want to call the teacher and explain what you're trying to do and enlist her cooperation. When little Harlan starts realizing that you are not going to bail him out when he plays his usual game, that is when he will start feeling the pain and being accountable. He's going to have to explain to the teacher why he's late, and he'll have to accept the discipline she gives him—detention time at recess or staying after school, or whatever.

Reality Discipline is not just a technique to discipline children. It's really a way of life for all of us. It's respectful, action-oriented, and it gives you an out in so many situations where you might otherwise be pummeled by your powerful little buzzards. So keep in mind the goal: To raise adults, not children. Someday they are going to leave your nest and no longer be under your protection. Hold them close in the early years, but bit by bit always look ahead to when you must let them go. Reality Discipline is the way to give them new challenges and responsibilities, so that someday they will be able to make the kind of decisions that life requires of them.