What is the best way to discipline a five year old for stealing something from the store? 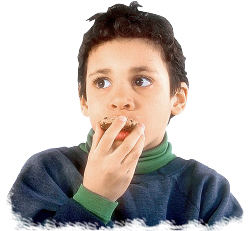 CONNIE [a parent]: We have twin boys who just turned five. When only one of us takes them along to the store, we usually put them into the shopping cart so they won’t get into mischief. If both of us take them, we let them walk along beside us, “like big boys.”

The other night my husband took the boys shopping alone and didn’t put them in the cart. While he was getting some things, they found one of those serve-yourself cookie containers. One twin took a bite out of a cookie and then put it back in. His brother, Mark, took the cookie back out and said,

“Daddy, David took a bite out of this cookie.”

So my husband put them both in the cart and went on with his shopping, but he kept telling David,

“I don’t know what is going to happen to you. We are going to have to talk to the manager and he might make you stay here and work to pay for the cookie.”

KEVIN [Dr. Kevin Leman]: This scenario sounds like its heading for disaster. What happened?

CONNIE: They got in the checkout line and my husband asked for the manager. My husband explained that David had taken the cookie, and then asked the manager, “Would you talk to him about this, please?” So the manager took David aside and his brother kind of tagged along to hear what was happening. A minute or so later, Mark started crying and screaming and ran back to his dad all upset. He kept sobbing,

“I want David to come home with us.”

RANDY [Randy Carlson]: And what is the question you have for us?

CONNIE: My question is, “Who is right, my husband or me?” I feel that the boys were a bit too young for a store manager to be correcting them. I feel it is our place to do that kind of disciplining right now. My husband thought taking him to the store manager was a great idea because that way he learned a real lesson. I told him I would call “Parent Talk” to see what you thought.

KEVIN: In one sense your husband was using Reality Discipline, trying to make your son accountable for what he had done, but at age five I would have to agree with you. The parent should handle this kind of situation.

CONNIE: That's what I thought. Telling a five year old, “I don’t know what the manager is going to do with you,” can conjure up all kinds of ideas in his little mind.

RANDY: At that age, what you create with that kind of threat is separation anxiety. What might have worked better is to have Dad go over with his two boys and talk with the manager, all of them together. But when the manager took David aside alone, that created an inordinate amount of anxiety, not only for him, but for his brother, who apparently was the one who got even more upset.

CONNIE: When they came home, my husband said to David,

“Tell Mommy what you did.”

Then his brother said,

KEVIN: Poor David. He uses questionable grammar, and he's a shoplifter—all at the age of five. I think we've got to lighten up on the poor little guy.

CONNIE: It was terrible. They both thought the police were going to take them all away.

RANDY: Tell your husband were glad that he tried to use Reality Discipline, but it would have been better to hold David accountable in some other way. For example, the next night at dinner Dad could say, “Sorry, David, but do you remember the treat you took last night at the store? That was wrong, and tonight you will have to go without dessert.”

Or, another approach would be to make it a point for everyone to go shopping together at the same store in a few days while the event is still fresh in David’s memory. He knows that when Mom and Dad are shopping together, both boys get to walk along with them, but this time David has to ride in the cart because he took a cookie from that container right over there. I’d only do these things once, and I wouldn’t continue to make an issue of it. David should get the message.

CONNIE: Would a spanking ever be in order for something like this?

RANDY: Only if David showed no remorse whatsoever for stealing the cookie, and he would get defiant and mouthy when you tried to correct him. But in this case, he probably felt badly enough and spanking won’t help. What you’re trying to do is teach David to be accountable for his actions, and I think the other methods we've suggested open up more possibilities for that.