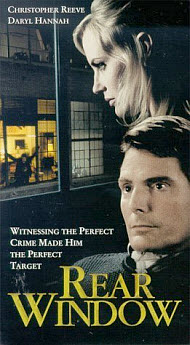 In this remake of the Hitchcock classic, Christopher Reeve (“Superman”) stars as a paralyzed architect who can still work, but who needs high-tech equipment and an on-site nursing staff in order to perform his ordinary life activities. Reeve, who is also co-executive producer, is of course using this film to promote awareness of disabilities—including his own real-life paralysis from a horseback accident—and to encourage more spinal cord research.

Jason Kemp (Reeve) suffers a broken neck from a head-on car crash (the other driver was slightly drunk and was using a cell phone); after six months of rehab, he attempts to return to work, but finds himself partially crowded out of his old position. The film showcases the awkwardness of people not knowing how to approach Kemp, the questions others have about his abilities, and all the little details of life that are different for a handicapped person. He ends up back on his old project, sharing responsibility for it with “the new girl,” Claudia (Daryl Hannah). With little to do in the evenings, he starts to watch his neighbors from the rear window, viewing all kinds of life activities (including sexual ones) that he can no longer fully share in. One night Kemp sees and intervenes in a domestic dispute, calling 911 using a voice-activated computer that controls all the mechanical functions in his apartment. When the husband makes bail and comes home, another fight breaks out.

Later that night, while Kemp is in bed, he believes he hears a murder take place; and the next morning the wife is nowhere to be seen. Are his suspicions correct, or is he overreacting?

Since this film was made for broadcast TV, there’s almost no profanity (one “go to h*”). There’s some on-screen violence including attempted murder. Seeing the Rear Window images of the various neighbors creates in the viewer the same unclean feeling as the original version of this film does; there’s no visible nudity, but we see things such as partial undressing followed by kissing silhouettes outlined through a flimsy curtain. Kemp has his aide Antonio install personal surveillance devices for a better view; and Kemp, Claudia and Antonio use language like “voyeur,” “peeping Tom,” “isn’t this illegal?” and “I hope you don’t get caught” in describing their activity. Kemp comments that the view from the window becomes hard-R-rated at night. Claudia, who is falling for Kemp, visits him unexpectedly one evening and offers to top it with an X-rated show of her own; since he’s paralyzed, she says they’ll have to “be creative.”

The murder-mystery theme really isn’t central here. The film is on one hand a worthwhile diversity-awareness vehicle, and on the other a device for breaking down our inhibitions. While we can understand why a man in Kemp’s condition might engage in “Rear Window” activity, that doesn’t justify it. Unfortunately, the film comes as a package deal only.