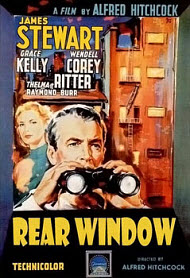 Considered one of the best films by director Alfred Hitchcock and following his formula of an ordinary man stumbling into trouble, this film is constructed in a way that makes the viewer uneasy.

Award-winning news photographer L. B. “Jeff” Jeffries (James Stewart) suffers a broken leg while trying to photograph a car race up too close; so until the cast is off, he has little to do but watch his neighbors from the rear window of his New York City apartment. His rich girlfriend Lisa (Grace Kelly, later Princess Grace of Monaco) and his nurse Stella (Thelma Ritter) warn him that voyeurism is a crime and is dangerous; but he persists, eventually graduating to binoculars and to a telephoto lens.

When Jeff says that he’s seen evidence of a murder, the ladies and Jeff’s detective friend Doyle (Wendell Corey) all react with initial disbelief, but gradually begin to be convinced.

The film is technically very well done, and it’s an interesting change of pace to see Raymond Burr in the role of a possible villain. Since it’s 1954, there’s no profanity, no visible sexual activity or nudity, and very little violence. However, a large portion of the film is shot from the standpoint of Jeff’s rear window, making each viewer into a voyeur. In order to learn the secret of the alleged murder, we must also continue to watch the activities of the other neighbors; and the director masterfully focuses us on the things that we can’t see, but know are taking place. The result is an unclean feeling, mixed in with the suspense. Aside from the rear window footage, the film contains other innuendo as well; Hitchcock was ahead of his time in loading films with secondary content.

I watched this movie last year. This is one I’ll NEVER forget. It’s so well done. Only Hitchcock can pull off a movie that takes place in ONE place. The apartment. He also did this with his movies, rope, and lifeboat. And for some reason I LOVE it! It’s so easy to follow the plot without feeling left behind. I am very sensitive to psychological scares and I like to keep away from them. This movie scared me a few times. But I kind’ve doubt anyone else will be frightened… My Ratings: [4/4½]

Caleb Thiessen, age 15
I can remember seeing “Rear Window” for the first time when I was in sixth grade. My mom rented it for me and as we watched it in the late hours of the night I couldn’t help but feel that I was being watched by someone and that if I turned around Raymond Burr would be standing over me! That just goes to show how a movie made a long time ago can still be intriguing.

Let me also tell you that I was never a fan of Jimmy Stewart, in fact, I might have been considered an anti-fan of his, but after seeing this movie I grew to appreciate how great of an actor he really was. Now he is one of my all-time favorites.

From a Christian perspective this movie is tame, tame, tame, but don’t let that fool you—it is still very shocking as well as it is interesting, intriguing, thought provoking, the list goes on. I guess you’ll just have to see it to find out what I am talking about.

WARNING: TALKING ABOUT THE MOVIE there is a murder in this film, but it is never shown and there is also a romantic relationship between Stewart and Kelly, but nothing is ever glorified about it. END OF DISCUSSION. I highly recommend this movie for all ages (well, maybe sixth grade and up). Don’t go see the remake, it’s trash compared to this Hitchcock masterpiece. My Ratings: [4/5]