for some language and brief violence. 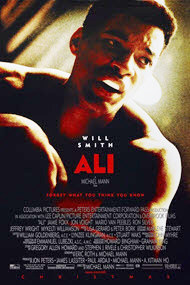 ABOUT ISLAM—An Overview for Christians

As with virtually anything out of Hollywood, “Ali” does not especially cater to Christian sensibilities. After all, “Ali” presents a reverent depiction of a controversial American who rejected Christianity and rejected what Americans once considered a patriotic duty to join the military.

Ali, the man, indeed achieved legendary, heroic status because he got us to understand his actions, whether we entirely agreed or not. “Ali” the movie does the same thing. We come to understand the visceral wisdom of Ali’s anti-Vietnam War stance: “The Viet Cong never called me nigger.” We realize the heroism of someone putting all on the line for principle. We understand, as did the U.S. Supreme Court, that all religions have the same right to Conscientious Objector status.

To fully reveal the man beneath the loud-mouthed swagger, the 2½ hour movie opens with a montage firmly placing Ali in the context of the racially charged mid-1960s. In so doing, “Ali” places the audience into the shoes of black Americans who were then making initial steps toward cultural self-determination from a past of denigration and subjugation.

Ali, along with many among us, made some missteps during this time, chief among them the infatuation with the Nation of Islam, leaping from the lie that Jesus was blond and blue-eyed to the lie that the white man is the Devil. The audience sees his subsequent disillusionment with the Nation’s falsity and manipulation.

As a black American who remembers those times vividly, I was deeply gratified that “Ali” works on the level of making Ali a metaphor for us all.

And it works on the level of being a fantastic fight film, richly rewarding moviegoers seeking true-to-life realism. Repeatedly, scenes flash by that seem exact re-creations of familiar photos and film. For the fight fan, the pugilistic depictions are as stunning in their accuracy as those in the “Rocky” series were embarrassing in their movieish choreography.

As for acting, there can be no exaggeration of Will Smith’s triumph in this role. Just as he beefed up from 185 pounds to 220, he has now developed from being a scrawny little clown as “Fresh Prince” to a true acting heavyweight as Muhammad Ali. Those of us familiar with Ali don’t have to sit there pretending Will Smith is Ali, even though his face doesn’t resemble the champ’s at all. Will Smith IS Ali.

Sadly, Muhammad Ali was greatly deceived by Muslims— How did this happen? And why was Cassius Clay actually his greatest name?
by Dr. David Wood, Acts 17 Apologetics
length: 17 minutes

Ali said that he changed his name because “Clay was a white name,” while “Muhammad” and “Ali” were not. Apparently his understanding of the historical facts was poor. In reality, Muslim sources say that Muhammad was quite white, and that both he and his son-in-law Ali were active slave owners and traders—and owned black slaves who Muhammad considered far beneath Arab slaves. Islam has a 1400 year history of active slavery and slave trading, including slavery of millions of black women and children—frequently used as sex slaves.

In a further irony, Muhammad Ali’s birth name was actually in honor of the well-educated 19th century Kentucky ABOLITIONIST Cassius Marcellus Clay who hated slavery, repeatedly risked his life in fighting against it, actively promoted racial equality, and who helped convince Abraham Lincoln to issue the Emancipation Proclamation.

Positive
Positive—By the very definition of the man, the movie Ali will not appeal to the Christian viewer merely on promoting the same gospel. There are however many lessons to be learned and many triumphs to be highlighted in this 2 and ½ hour movie. “Ali” does forge ahead in its continual reference to religion, its promotion of Ali’s personal religious rights, and it does not particularly target the Christian faith as a point of hatred. Understanding our culture is a part of our ability to reach others with the gospel of Christ. This movie allows the average Christian to see into the mindset of a young African-American Muslim. Understanding where a person is coming from allows for a smoother transportation to the truth.

From a pure objectionable sense, Ali does have some scenes which give way to sexual advances, however, it does not show full or frontal nudity in any scene. Questionable language finds its way in and out of the movie at points but not as a focal point, more as a way to set up the scenes. My overall impression of “Ali” the movie was a positive one. I would recommend this movie to adults interested in either sports or learning the mindset of this time period.
My Ratings: [Better than Average / 5]

Tally Wilgis, age 23
Positive—Ali is a good movie. As a christian I especially appreciated the fact that the Muslim religion was not glorified. Will Smith did a great acting job. I would not recommend children under the age of fifteen because of the one scene which simulated sex, however that seen is similar to ones shown on primetime TV and cable.
My Ratings: [Average / 4½]

Vivian, age 32
Neutral
Neutral—Will Smith was an excellent choice because he portrayed the charisma of the famous boxer well. The boxing sequences were extremely well done. The story, which only covers ten years in the champ’s life, needed some work. The women characters are poorly drawn. Ali is shown meeting his wives, having arguments with them, then they are gone, and little is divulged about their personalities. Jon Voight is great as Howard Cosell, who’s seems to be the only character who’s not afraid to be truthful with the champ. Jamie Foxx provides some comic relief as Bundini, one of Ali’s cornermen. This film is okay, but I would recommend more that audiences read biographies about the man as well.
My Ratings: [Average / 2½]

Hillari Hunter, age 40
I saw this movie on its opening night, but the reactions following the evening’s anticipation were about evenly split. A friend of mine, an avid boxing fan, enjoyed the movie… my sister fell asleep halfway through. The movie had some parts that dragged unnecessarily, but an interested viewer could keep the story in mind. There are graphic boxing scenes and a couple of assassinations. Some more offence may be found in Ali’s behavior with his wife-to-be. Ultimately, the athlete’s life story as told by the movie supports the fact that empty religion can only echo our sinful nature; only Jesus can truly satisfy.
My Ratings: [Average / 3½]

Nnenna Agim, age 22
Movie Critics
…One graphic sex scene is shown with Ali and his future wife, although no nudity is revealed…

Preview Family Movie and TV Review
…one of the most frustrating disappointments in recent years…
Steve Sailer, UPI
…“Ali” is a long, flat, curiously muted film about the heavyweight champion. It lacks much of the flash, fire and humor of Muhammad Ali and is shot more in the tone of a eulogy than a celebration. There is little joy here. …The film feels like it's under a cloud. …[2]
Roger Ebert
…ALI is a tedious, boring, poorly-edited example of bad filmmaking. Will Smith is okay as Muhammed Ali, but he does not have the charisma the real Ali had…