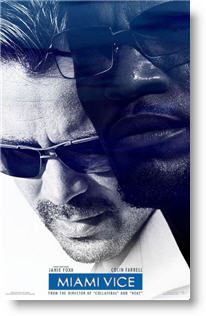 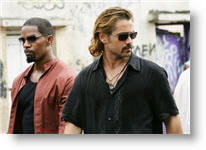 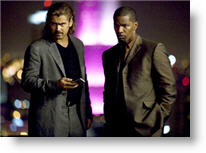 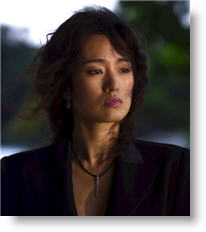 “Sonny” Crockett (Colin Farrell) and Ricardo Tubbs (Jamie Foxx) are cops with the Miami/Dade Police Department. At the beginning of “Miami Vice”, they infiltrate a dingy nightclub to bust a prostitution racket. But they are interrupted by a call from an FBI informant, who tells Crockett that a crucial operation has been compromised. An undercover agent had arranged a drop with members of a South American drug ring, but his identity has been exposed and the deal is about to turn deadly. Crockett and Tubbs try to alert the bureau in time to intervene, but they are too late. The agent and his associates are all gunned down. Now the FBI is in a fix: The source of their intelligence leak is unknown, so they cannot rely on any of their intelligence or the anonymity of any of their field operatives. So, since nobody in the drug cartel knows Crockett or Tubbs, the FBI enlists the pair for a black ops mission to infiltrate the organization and bring down their slippery top man, José Yero (John Ortiz).

Crockett and Tubbs take the mission, on condition that their methods go unquestioned. But it is not long before they realize that Yero is not the top man at all, but in fact works for Arcángel de Jesús Montoya (Luis Tosar), who is the mastermind of an international organization centered in Paraguay. This raises the stakes—and the potential rewards—for the two Miami cops. Then the stakes are raised further when Crockett becomes romantically entangled with drug queen Isabella (Gong Li), who is close to Montoya. Can Crockett’s tryst gain him privileged information, or will he risk the operation by exposing himself and becoming too emotionally entangled?

Formerly a primetime television series in the 1980s, “Miami Vice” is now an R-rated film written and directed by Michael Mann (the executive producer and a frequent writer and director of the TV episodes). The film bears little resemblance to the television series. The names are the same, but everything else is different, from the tone to the content. Drug dealing is a sordid affair, and the film unflinchingly depicts the brutal violence that is inevitably associated with it. But the movie also contains excessively vulgar dialogue, vain use of the Lord’s name, and overt displays of male and female nudity in several scenes of graphic sex. On top of that, the story is unremittingly serious and bleak, with scarcely any wit or humor. The result is a film that will offend most people, and leave everyone else longing for something to make them laugh and forget about it.

Some stories contain violence, vulgarities, or indecencies and still address greater themes of God, morality, judgment, sinfulness, mercy or redemption. (The book The Kite Runner falls into this category.) Such stories are distinguished by the way they shed light into the darkness they depict, and by doing so recall the character and work of Christ (either directly or indirectly). “Miami Vice” sadly fails to do this. There is very little hope in the film. Not a single character ever appeals to God (or even a poor imitation of Him). There is no mention of a standard code of morality, or of some greater guiding principle. Crockett and Stubbs are just going through motions to bring down a drug lord because that is what they do. One may, perhaps, see a theme in the film of no honor among thieves, but that is barely developed.

In the end, the movie is offensive and contains nothing thoughtful to make it worth enduring the offense. To make things worse, it is poorly made in most respects. Pedestrian camera work combines with murky, grainy photography to make the film either dull or annoying to watch. The score is alternately uninspired and intrusive. The performances are almost too difficult to critique, because all of the characters suffer from a script that affords them no background, development, or memorable dialogue. Even Crockett and Tubbs are given absolutely no introduction. (Are we supposed to know them from the television series? If so, why are they not the same people?) The film manages some tension now and then, but when the viewer is given no reason to care about any of the characters, it all becomes desperately hollow.

“Miami Vice” does depict vice in Miami (and in Cuba and various South American locales), but an apt title scarcely merits the film a recommendation. Plus, I doubt that Miami’s Board of Tourism is well served by this dire movie.

Note: This review page is about the theatrical version of “Miami Vice,” not the unrated DVD version.

Negative—Lots of Vice. Not enough Miami. Not the same characters as in the TV show. What made the TV show fun to watch (color, music, fashion, the perception of realism and danger) is all here, except for the color, music, and fashion. Oh ya… nobody is funny in this movie except Crocket and Tubbs’ dumpy chief, and then only for a dark, brief one liner. Oh, and when Colin Farrell tries to dance. What hurts the story is that it is suppose to be predictable: the good guys are suppose to win so they can come back next week. With such a burden, the predictable outcome must be reached with a certain level of pizzazz, style, etc. which is not attained.

Not for the young kids (but, then, neither was the TV show). Warning: If you watch the film with older children, you will have two opportunities to point out how gratuitous nudity does not enhance a story. Speculation: both movie stars Foxx and Farrell had love-making shower scenes in their contract? Recommendation: forget this one. For Miami Vice fans: disappointment awaits you. If you must see it: wait for the DVD version. It’s not a bad movie, just not memorable.
My Ratings: Average / 3

Alan Bardwell, age 47
Positive—Wow! An incredible experience! All the action scenes were packed with realistic intensity and suspense. Acting was so-so on the parts of the whole cast except for Foxx. Foxx was great as always. I was shocked at the number of children present in the theatre. The film does include pretty heavy sex scenes. Not much nudity though. Leave the kids at home for this one!
My Ratings: Offensive / 4

John, age 20
Negative—Don’t even bother to watch this film when it comes out on network television in a few years. It’s horrible. Everything from the script, to the characters, to the plot is bad. The sex scenes are excessive and pointless, and the pseudo-romance between Colin Farrell and Gong Li has no depth (however, she is a good actress). This movie ended with many unanswered questions. Compared to the original TV series this movie gets an F. The best thing about this movie was the speedboats and the Cuban accents.
My Ratings: Extremely Offensive / 1

Tanda Murray, age 23
Comments from young people
Positive—Coming off the success of “Collateral,” a dark and fascinating film, I was eager to see Mann’s latest in “Miami Vice.” Since I’m 16, I have no knowledge of the original show, yet the general feel I get is that it was a 80s cop show that was fairly lighthearted. Not so with this film; Mann has created a dark, gritty and enthralling world that is stylistic to the point of excess. The choice to film the movie with handheld digital has garnered complaints from many, but I absolutley loved it; by doing this, Mann adds a level of authenticity and realism to the picture that would not have been acheived otherwise.

From the opening scene, “Miami Vice” is a thrill ride involving cool and collected cops working against ruthless and vile villans. The film has teeth, and an attitude of rebellion and ruthlessness that sends sparks onscreen. In one particular scene, Colin Ferrel’s character is in discussions with a drug dealer. When things start to get hostile, and he is insulted, Ferrel pulls the pin of a hand-grenade and slams it on the table infront of the dealer. He is calling the shots, and is not to be messed with. The ferocity of such scenes is both thrilling and absorbing; these cops run the show on their own terms, and aren’t afraid to bend any rule in the book. In fact, scratch the book—these boys full blown violate everything. Even the closing sequence, with it’s intense musical build-up and sudden cut-off announces an “elvis has left the building” type finale—“we’ve done our thing; go home.”
My Ratings: Average / 4