The Fast and the Furious

“Lay It Down” (from the producer of “Mercy Streets”)

Did you know that you could attend Summer School for less than $10 a class? I honestly don’t know which is more ridiculous: Universal making this movie about “illegal street racing” or USA Today doing a full feature in their paper on how to make “illegal” modifications to your car. Judging from the cars in the parking lot and those that attended this film—school was in session.

“The Fast and the Furious” is another vain American Graffiti attempt to capture the “heart and soul” of America’s innercity youth. And the overall spirit of this film is more vicious than “Gone In 60 Seconds”. 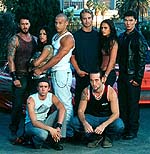 Included in “TFATF” is reckless operation of cars, reckless use of alcohol (glorified), and a reckless message regarding pre-marital sex (partial nudity included). This is mild compared to a high level of profanity (including 3 uses of the “F” word) and some very dark and gruesome violence. True, maybe this is “reality” in many cities but it doesn’t make it right.

Once again the MPA has given a gift to one of the powerful entertainment brokers. I am still stunned that this film got a PG-13 rating. This film marks another dangerous precedence for parents trying to trust the rating system. The truth is, we cannot. I am thankful for web sites like Christian Spotlight, because of that very reason.

The film features Brian O'Conner (Paul Walker) as an undercover cop trying to solve several thefts. Most of these involve the heist of 18-wheelers. Brian soon gets in good with Dominic Toretto (Vin Diesel). He is the tough leader of this octane driven gang. It isn’t long before Dominic’s sister Mia (Jordana Brewster) catches Brian’s eye.

As would be expected from a film like this, there is a plethora of fast car chases and the action is intense at times. The studio boasts that there was more real metal flying and real stunts than the CGI imitations in Stallone’s “Driven”. The only problem is that morals are the true metal of a films content. And this film fails at almost every level.

Chinese crime lords are the villains at bay in “The Fast and the Furious.” Unfortunately, the plot is very skimpy at this point and uses a lot of violence to fill in the blanks. On an offensive level this film pokes fun at prayer and honoring God. Taking into account all the negatives present I heartily recommend without any hesitation avoiding this action flik. Not even worth a “curious” rental visit later this year.

I’m not sure what the true motivation is behind this movie, but most Christian viewers will only be spinning their wheels if they choose to see “TFATF”. Perhaps “fast” will be the pace discerning Christians will leave the theater and “furious” parents will be if their unsuspecting teen sees this film’s dangerous messages.

Like a few of the other viewers posting their opinions here, I went to see TFATF because of my passion of performance import cars. (I myself have a modified Honda and I have a coworker who is also a born-again believer with a modified Honda that could have easily fit into this movie.) Anyhow, I was thoroughly able to enjoy the “acting” demonstrated by the cars and stunt driving (more than the actors themselves). Despite my enjoying the array of performance import cars in TFATF, there were many scenes and dialog that could have easily been deleted without hurting the plot flow and appeal of this movie. These objectionable occurrences are as follows: Vile public display of lesbian and heterosexual contact, saying mealtime grace in which the prayer was solely using automotive metaphors, fornication (Hollywood movie staple), and the violent murder of one of the club members. In addition, I had a major problem with the main character allowing the antagonist (Diesel) to escape without having to answer to criminal charges. (This is akin to a cop whose “on the take”) Outside of these instances, I really enjoyed the movie and plan to purchase it on DVD (where I can control the scenes shown).
My Ratings: [Average / 3]

Leroy M., age 33
Personally, I loved this movie. I absolutely love cars, and the cars in it are awesome. I would love to drive them. I mean seriously, when your car tops out at 140 and that’s a bad thing; wow, I want that car. There were many offensive things that were added into the movie. I noticed them. I’m not going to pretend that they don’t matter, but I went to see the cars, plain and simple. I wish Hollywood didn’t feel that they had to put sexual innuendo, partial nudity, scantily clad women (degrading), lesbian kissing, cussing, etc. into a movie to make people want to watch it. Everyone, for the most part, went to see the cars. That was the draw of the movie. With the cussing, well PG-13 means children should have parental guidance if they’re under 13 doesn’t it? At age 13 kids are in junior high. I have always attended a public school, and the average amount of cussing I hear in one day; well let’s just say the movie doesn’t compare. The cars in the movie were unbelieveable; I want that Supra. I under no conditions think that young children, or maybe even some younger teens should see the movie, but I loved it.
My Ratings: [Very Offensive / 5]

Bethian, age 18
This was a very entertaining movie with slightly objectionable content. I do not think that this film should have received an R. Why would they give it such a hard rating anyways? The PG-13 is just what it needed. It was a good action flick, and my cousins, my sister and I all enjoyed it and are going to see it again. Recommended!
My Ratings: [Average / 3½]

Adam, age 18
The movie delivered what it promised: forgettable acting and memorable driving sequences abounded. No parent should let their young teen see the film. Many adults that are intrigued would likely be turned off by the soundtrack, as well. My father, a car buff himself, asked me for a report before I took in the film. I did not recommend this movie to him. For those of you aged 18-30 who know the difference between disc and drum brakes, this movie MIGHT be worth $7.00.
My Ratings: [Average / 3½]

Trevor Hughes, age 19
I went to see Fast and the Furious last week. The cars and stunts are far out! But sadly, the morals of the characters and the story are not so great. Let me point out few, some characters broke laws, had pre-martial sex, murdered somebody. And the story don’t have any obvious climax. The actors aren’t anything special, they don’t have any strong character. Apparently my expection was too high for this movie. If you just wanna check out the cars, go ahead. But don’t waste your money for a lousy plot and cinematography. Wait until it became an old release. (or never)
My Ratings: [Very Offensive / 2½]

Zanny W., age 15
This was one of those movies that removes truth from morality and makes relativism God. I am a big fan of action movies, and I’m not bothered by many movies that bother other christians, but this movie bothered me with the way that the “Heroes” were people without personal conviction or morality. Personally, violence, mild language, and mild nudity don’t bother me as much as the removal of truth. This was one of those movies where the line between good guy and bad guy was non-existent. Forget the violence and language, there was not a moral character in the movie.
My Ratings: [Extremely Offensive / 4]

Rob Schwartz, age 32
I am a christian that also loves fast cars. I always have and always will. I go to car shows in between services on Sunday. I couldn’t tell you how much profanity was in the movie but I can tell you how many blue, yellow, red, and the make and model of every car in the movie. This movie is not for those Cadillac, Lincoln or minivan driving Saints. Just like the other viewer I was expecting a few good races but nothing as good as the camera shots and races with the nice cars as I saw. The one thing I didn’t like was how they portrayed the car enthusiasts as rejects and criminals some of us actually work a 9-5 to get the funds to get their cars in shape. (of course that is after I pay my tithes)
My Ratings: [Average / 5]

Quincy “Da Bug” Whitaker, age 31
Not sure where the information on this film came from as I apparently missed both the thong bikini shot and the side view of a woman’s breasts mentioned in the Editor’s Note. There are a few scenes that are morally questionable, but I’ve seen far worse flipping past MTV. The film itself was entertaining, not a great film but definitely entertaining for any car enthusiasts. I wouldn’t recommend it for younger kids though, and make sure the person driving home takes a deep breath, remembers that it was just a movie, and that those stunts don’t necessarily work in real life :-)
My Ratings: [Average / 3]

Chris, age 27
This movie was the best car movie I’ve ever seen and really recommend this movie to anyone who loves fast cars… This was a real movie, stuff that actually is really done, not just Hollywood… I walked out of the theater after the movie very pleased and considering seeing it again really soon. Great Movie!
My Ratings: [5]

Steve, age 17
I thought the movie was excellent in that it was well put together; no slow parts. It was exciting and entertaining. The car scenes were awesome and special effects were great. Besides that though, there were way too many scantily clad women, disgusting scene with a man holding a woman’s breast, and crude language. I wouldn’t recommend it to people who have a sensitive conscience (like me) because you leave feeling dirty.
My Ratings: [Extremely Offensive / 4½]

Joy, age 17
I found the movie to be very enjoyable… there were a few scenes without the Blair Witch-esque motion sickness camera shots that could possibly make a lot of women cringe (I know I did), but, other than that, I found TFATF to be a fast paced PG-13-rated flick with a G-rated feel at parts, such as the way Dom is protective of his sister. The premarital sex is gonna happen in a movie like this… the sex appeal of the actors is too strong. As for the violence, there was more blood on Dom’s shirt than on any of the actual actors. The language is gonna happen because that’s how street teams talk… TFATF is a fantastic ride that delievers just that. A+
My Ratings: [Average / 5]

Kira Wyland, age 16
I did not expect the film to be this good. I was looking forward to incredible car races, terrible acting, and horrible dialogue. However, we got super-incredible car scenes (gotta love that NOS), above average acting/dialogue, and a totally entertaining movie. What I primarily look for in films is entertainment and good filmmaking (editing, directing, writing, sound, photography, etc.). It had an above average level of most of them, along with superb car races and absolutely gorgeous modified cars!… Good editing, directing, sound, and other technical aspects made this a good film even if you’re not a car enthusiast. Who can say they don’t like fast cars? By the way, the Supra in this movie beat the Ferrari ONLY because that Ferrari is one of the least powerful that they make.
My Ratings: [Average / 4]