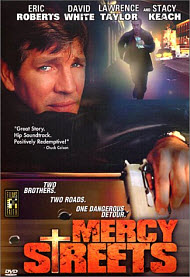 Eternal death in the Bible

It’s an exciting time for the theatrical Christian film industry. Like never before, millions of people are able to be impacted with strong messages of faith and hope that Hollywood fare films just don’t deliver. 1999 brought such films as “Revelation” and “The Omega Code” to the big screen.

And now, seeking to provide clean entertainment with a Christian worldview, Signal Hill gives us “Mercy Streets” in a realistic modern day story about two brothers with an opposite outlook on life.

Orphans separated at 14, Jeremiah (David A.R. White), an aspiring Episcopalian priest on the verge of ordination, and John (also played by White), an ex-con, soon find themselves facing life’s ultimate questions. Jeremiah’s entire existence is shadowed by the belief that he killed his brother. What he doesn’t know is that his brother is very much alive. Just released from prison, John reluctantly agrees to do one more “job” for Rome (Eric Roberts). In return he receives $50k up front. John runs away with the cash to his brother’s house, but when Rome and TJ (Robert LaSardo, in a somewhat comical gang role) discover where John is headed, they arrive at Jeremiah’s residence and kidnap the wrong guy. The two brothers literally switch roles and John is forced to play the part of his preacher brother. Girlfriend Samantha (Cynthia Watros) likes the “new” Jeremiah and has no idea what is going on, but best friend and police-officer Tex (Shiek Mahmud-Bey) begins to suspect something is amiss.

It’s hip, it’s action, it’s drama, and it’s faith all rolled into one captivating story of forgiveness. And where does forgiveness come from ultimately? Through the person of Jesus Christ. In one climactic scene, Father Tom (Stacy Keach) guides the doubting Jeremiah to realize that just knowing about Jesus isn’t enough. You have to accept him and let go of those things in which you need forgiveness. Preach it, brother! But don’t think the entire film is preachy; most of it isn’t at all.

Before you grab the whole family and head out to see “Mercy Streets” at your local theater, please note that it is not for all ages. If compared to other theatrical releases, “Mercy Streets” comes through virtually spotless. But if viewed from a Christian film perspective, there are some factors to consider: there is one instance of profanity (“go to hell”) and situations surrounding life of crime in the big city. Alcohol is abused, and some women are shown in tight-fitting clothing. Violence is seen throughout the film by way of fist fights, shooting scenes, and threats given mostly by Rome. Father Tom, in his short appearance, tells Jeremiah that he is divorced (while discussing forgiveness, alluding to God being more forgiving than his ex-wife). Jeremiah and Samantha are also seen kissing on a few occasions. All content was carefully presented in light of its intended audience.

Without a doubt, “Mercy Streets” stands on its own merit. It has a strong story with, most importantly, a crucial message that Christ needs to be the Lord of our lives. This film is recommended for teens and adults, and is an excellent opportunity for Christians to lead unsaved friends toward the truth. Don’t miss it!

I went into this movie praying somehow the Lord would deliver us (Christians) from the glorified B-movies we seem to cling to with unflinching loyalty. A buddy and I stumbled upon this film at a local theatre and were the only ones in the theatre to watch it… this alone truly showed the lack of respect the film going public has for movies that are not WHAM! BAM! in your face violence and other senseless acts… enough on that note and on to the film. Mercy Streets was a stylistic leap from the “average” Christian film. There was actually music from other sources besides a synthesizer, and this music really created a mood and aura for the characters. The acting was superb and gritty for a low budget film. And the film work was artistically and cinematically merited. Many times in reminded me of current “main stream” filming techniques employed by some of the most influential and cutting edge in Hollywood. I was also impressed by the honest approach to the current cultural realisms around us. As another response said… it has been long enough that we have candy coated reality. “Mercy Streets” shows us that film can be realistic and Godly at the same time. I can only hope this is the first step in a new dawning for Christian cinema. My Ratings: [Excellent! / 5]

Ryan Hartsock, age 25
Amazing! I went in to this movie putting it on the “christian” movie shelf in my head and came out of the theatre blown away at the movie making quality, script, and acting. I honestly place this movie in my top five favorites (including secular movies). I would enthusiastically bring any of my non-christian friends to this movie. It focuses on the reality of life and has an awesome message of forgiveness, yet makes sure not to cram it down your throat. “Mercy Streets” was a bit violent for younger audiences, but was a sight for sore eyes compared to the movies out right now. Please, please get out to see this movie to support it, call your theatre and ask them to bring it to your local cinema. Oh, and invite your non-christian friends. They just might learn a little about God’s perfect forgiveness and love. My Ratings: [5/5]

Seth Miller, age 16
Yes! Finally—A progressive, smart, hip, stylized Christian film! It brought filmmakers such as the Coen brothers, Tarantino and Tom Tykwer to mind. While the Gospel message could have been clearer (the episcopal angle muddled it further,) this is the first Christian film I’ve seen that could give any good Hollywood film a run for its money. Bravo Signal Hill! Oh that you had done the Left Behind movie… Keep them coming and please increase your marketing budget as I merely stumbled on this one. My Ratings: [5/5]

Brenda S., age 42
This is an excellent movie. Hollywood has been cranking out the garbage for many years now and it is great to see a movie with redeeming (literally) qualities. David A.R. White does an excellent job at playing BOTH roles. I hope that movies like these are just the start of a change in Hollywood. We need to support these. The more we see the more will be made. My Ratings: [5/5]

Jeff Jones, age 29
In the early seventies, I worked at World Wide Pictures (Billy Graham Evangelistic Films). I often tried to impress upon a few of the “powers that be” that they needed to be a bit bolder (perhaps more realistic to life) in their films in order to reach those who needed to hear the message. While some of the films were pretty well done, there seemed to be an overall fear of offending the BGEA board which resulted in films which seemed to be geared more toward Christians than the non-Christian moviegoers. I have read all of the wonderful books in the “Left Behind” series and recently viewed the “Left Behind” video. I was very disappointed in the film. If I had not read ALL of the books, I would have been lost watching all the jumping around and the lack of any storyline. Today I went to see Mercy Streets. [It has] certainly renewed my faith in Christian films. It was terrific and I would take any non-Christian friend to this movie and be proud of the quality and the storyline and simply everything about it! Finally!! Someone has made a movie that would make any Christian proud to recommend it to any and ALL of their friends, Christian and non-Christian alike. Thank you so very much for a truly quality production with such a timely and important message (a message that is not forced down our throats, but is still very much in evidence) in the film. This film is the BEST ever! My Ratings: [5/5]

Cynthia Gibson, age 56
I am thrilled that I saw the ad in our Friday local entertainment insert for this movie. I hadn’t heard about it. I checked the Web site (mercystreets.com), watched the trailer, grabbed the family and went. This was a fine movie. Certainly, Christians should support it. But, this is a great seeker movie, as well. There were about 30 patrons at the Saturday matinee. I have been excited about the prospects for the Left Behind movie (which I had viewed the previous evening). Mercy Streets is a better movie by any standard I can consider. Better actors, scripts, photography, even message. My 14 year old son was a bit put out that I had selected this film over the “Titans”, but I heard no complaints leaving the theatre. I have read some of the reviews speaking condescendingly of the clean language of the bad guys. I was impressed at the ability of the screenwriters, director, and actors to pull off “badness” absent foul language. See this movie before it is gone and take an unbeliever with you. My Ratings: [5/4]