Revelation in the Bible

About the Book of Revelation

PROPHECY—Is there valid prophetic evidence that the Bible is God’s Word? Answer

“Revelation” is the sequel to “Apocalypse”, following on in the end-times scenario of a frightening post-rapture world. “Revelation” stars Jeff Fahey as counter terrorism expert Thorold Stone, a man forced to deal with the reality that his wife and daughter were among those who disappeared with millions of others around the world. As he tries to piece together the true meaning of their disappearance, he encounters a nasty conspiracy connected directly to a charismatic world leader who calls himself the Franco Macalousso, or the Messiah (Nick Mancuso).

While investigating a bombing that killed a bus full of children, Thorold comes across a group of underground believers who are framed as terrorists. While the Christians are taken into custody, one woman slips Thorold a computer CD that contains highly sensitive information about the upcoming “Messiah’s Day of Wonders.” If Thorold can break through the security and find out what’s on the disk, he can help to put a stop to the evil intentions of the self-proclaimed “Messiah.” 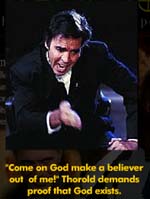 There is some adult-level humor and tense/scary scenes (including a Satanic incantation). “Revelation” was rated PG-13 in the U.S., and it actually was released to film theaters worldwide. There is one instance of “hell” used by the atheistic protagonist during an intense challenge for God to show himself. Many of the characters deal with some serious issues: when he was young Thorold watched his mother die to cancer and God didn’t heal her, Cindy Bolton (supermodel Carol Alt) is blind and bitter that God never answered her prayer for eyesight, and Willie Spino is lame and wants to walk. These are real issues and provide excellent material for discussion. The question of why God allows the innocent to suffer is as old as sin itself.

Thorold eventually becomes associated with a group of new Christians who are committed to thwarting the plans of Macalousso, whom they believe is clearly the predicted figure of the Antichrist. His evil plans to distribute virtual headsets that will force mankind to decide their allegiance to the Antichrist, or shun him altogether and face immediate execution, is set to happen on the “Messiah’s Day of Wonders”… and time is running out. Thorold finds himself unsure who to trust and what to do, and ultimately his faith is on the line and his eternal destiny at stake.

“Revelation” is an entirely Christian production, released by Cloud Ten Pictures and produced by Peter and Paul Lalonde. The acting and technical aspects of this sequel far exceed “Apocalypse”. While still not on par with Hollywood-style productions, this unique Christian film studio based in Canada has great potential and is sure to produce even better quality as their experience and budget builds. Let’s remember to keep them in our prayers as they earnestly seek to captivate minds for Christ while we wrestle on Earth against principalities and powers that are sometimes beyond our understanding.

Positive—My husband is a new Christian, and I showed him my copy of the movie “Revelation.” This morning when we got home from work at 3:30am. He popped it in to fall asleep watching it. He was so intrigued, he ended up watching the entire film! He wants to watch it again when we get off tomorrow morning! I love this movie! He said, “I want more movies like this!” Praise the Lord!!
My Ratings: Excellent! / 5

Patricia Masters, age 31
Positive—I really liked this one. Much better acting and a much better quality of a movie than “Apocalypse”. I would recommend this one, but would skip the first (Apocalypse). It had a very strong impact and we really enjoyed it. Great message! More realistic acting and situations! Good review! I actually thought it was a better story line than “Left Behind”… My Ratings: [Good / 4]

Kim, age 33
Positive—I’ve seen almost all of the apocalyptic movies… “Left Behind,” “The Omega Code,” “Tribulation,” that old one from Mark IV productions [A Thief in the Night]. While I found them all interesting because they deal with a topic in which I am interested, none of them met up to the standards I expected, even “Tribulation” which was the sequel to “Revelation”. But “Revelation”, while on rare occasions lacking in certain areas had the right amount of action, the right amount of suspense, and the right amount of sci-fi to keep me entertained… I think it is the only movie I could recommend to a non-Christian audience. My Ratings: [5/4½]

David Mackey, age 16
Positive—Excellent! This movie is superb. I have watched it a few times with friends. A movie which challenges you and makes you think. My Ratings: [5/4½]