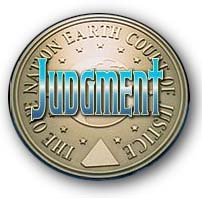 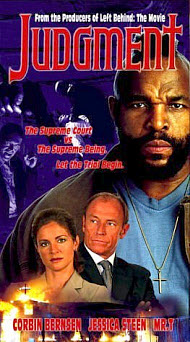 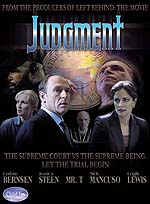 Q&As about the Jesus Christ’s resurrection

Is the Bible truth or tabloid? Answer

“Judgment” is the fourth installment in the best-selling Christian end-times dramas begun in 1998 with “Apocalypse”. This 2001 release by Cloud Ten Pictures assumes most viewers are familiar with the series and so spends virtually no time getting into the greatest trial of all time.

“Apocalypse” (1998) introduced us to TV anchor Helen Hannah who discovered the truth about Jesus while living through the beginning of the prophesied rapture of Christians worldwide. “Revelation” (1999 theatrical release) brings us the rise of the antichrist, world leader Franco Macalousso (Nick Mancuso). “Tribulation” focused on the awakening (both physical and spiritual) undergone by police detective Tom Canboro (Gary Busey) who comes out of a long coma into a strange new world governed by One Nation Earth and Macalousso. Helen and her buddies took more minor roles as renegade-for-Jesus TV-signal jammers. With her capture in “Tribulation” everyone was to assume she was dead, not willing to accept the mark of the antichrist warned against in Scripture.

Of course, Hannah wasn’t really dead. We find she was imprisoned in order to play into the world leader’s wicked scheme to use her as an example to all. She is the defendant in a pre-scripted trial used to put the idea of a Supreme Being (God) and Jesus Christ to rest once and for all and convince all world members to turn in any and all “haters” (Christians).

New to the series are high-powered lawyers Victoria Thorne (“Trial and Error’s” Jessica Steen) and Mitch Kendrick (“L.A. Law’s” Corbin Bernsen). Both true professional actors turn in convincing performances. Mr. T’s (yup, the Mr. T of “The A-Team” fame) much touted role in this film was lackluster. His character displays a lot of anger and brow-furrowing actions—not far removed from his most famous role as B.A. Barrackas. Yet, we know that there are and will be people like him, and his hot-tempered actions are always discouraged by the other more mature Christians in the group.

“Judgment” is a courtroom drama, and as such there is many opportunities for good topics to be brought up and discussed from both sides—skeptics and Christians. Chief among these spiritual topics is the existence of God and why He doesn’t show Himself and stop evil from happening. Jesus’ resurrection and the evidence to back it up is also key in the evidence raised. The Apostle Paul says “If Christ has not been raised, then our preaching is in vain, your faith also is vain.” (I Cor 15:14) True indeed, and I believe “Judgment” will prove to be an excellent discussion starter for Christians to view with their skeptic friends and family.

Overall, “Judgment” is worth its 105 minutes, especially if you are a fan of the series. However, I would recommend this film for teens and up due to the violence (some shooting, several displays of hatred, explosions, and a knife-point attack) and subject matter at hand.

Far and away the best Christian movie in a long time!! From the production to the acting—all VERY well done. Finally a “Christian” I’m not ashamed to show my non-Christian friends because of the grade-B quality. Just wished it was released in widescreen.
My Ratings: [Excellent! / 4]

Lee, age 52
Minus the lack of quality acting and low-budget movie sets, “Judgment” was an okay film. I didn’t realize it was part of a series, and you don’t have to see the others to understand the story. However, the whole thing could have been put together with more compelling dialogue and action sequences.
My Ratings: [Excellent / 2]

Guardian, age 28
When are the LaLonde brothers going to quit and why can Christians not make a decent movie! The acting was sub-par. The plot was worn out. “Judgment” is altoghther a late night TBS “we have nothing else to play between American Ninja 2 and Twins” movie. don’t waste your $30 bucks buying it (or your $7 seeing it in the theatre if they have it sponsored in your area). Watch Ben-Hur, a movie that comes from a time when we could make Christian movies that everybody wanted to see.
My Ratings: [Better than Average / 1½]