PROPHECY—Is there valid prophetic evidence that the Bible is God’s Word? Answer

The Book of Revelation

As the third installment in the “Apocalypse” Christian movie series, and the sequel to “Revelation,” “Tribulation” (from Cloud Ten Pictures) shows a clear evolution in the departments of acting, budget, special effects, and more. Starring Gary Busey, Howie Mandel, and Margot Kidder this film helps to prove that Christian films can indeed feature well-known Hollywood actors and actresses. And the difference shows the experience that seasoned actors bring to the big screen.

In “Tribulation”, Tom Canboro (Gary Busey) is a police detective who witnesses some bizarre incidents that appear to be supernatural in nature. While not yet a believer in Jesus Christ, Tom completes a journey that he began as a child when his older sister (Margot Kidder) taught him and his brother about God and His creation. After an automobile wreck puts Tom into a long coma, he wakes up in a strange new world where he finds his sister and millions of others on Earth vanished, and those left behind having no recollection of any “haters” that had previously been on the Earth. The world is captivated by Franco Macalousso (Nick Mancuso), a miracle-working peacemaker on the outside, Satan himself on the inside. His goal is to use a virtual-reality headset that each Earth citizen must wear that will force each person to either claim allegiance to him and obtain the desires of his heart, or reject the Antichrist and face immediate death. Tom and a handful of others remain neutral on Earth—those who haven’t yet donned the headset and made allegiance to the Antichrist.

As Tom tries to piece together the events of the last many months, he must also choose what to believe and ultimately who to place his trust in for eternity before he must face Macalousso and decide his fate.

Of an interesting side-note, Gary Busey became a Christian in 1995 after a drug overdose. He was happy to use his talents in this salvation-proclaiming end-times account of what the future may hold.

Other characters were also strong in talent and proved quite believable. Leigh Lewis is back as former World News Network anchor woman Helen Hannah whose main role in “Tribulation” is hacking into the world communications satellite infrastructure to deliver biblical messages of truth to those brainwashed by the Antichrist. 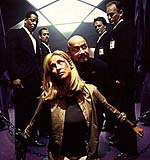 Appropriate for junior high youth through adult, “Tribulation” is a good pick for Christians to use for both entertainment as well as evangelism. Brush up on end-times prophecies by reading the book of Revelation in the New Testament, and Daniel in the Old to field questions that will be raised.

Positive—I really liked this one too. Much better quality. You can definitely see improvement with each movie. Good acting. Gary Busy was very convincing. It was almost like he wasn’t even playing the part of an actor, he seemed very genuine. Much more real in emotional issues. Great movie for the unsaved along with “Revelation”. I would highly recommend both of these to anyone, saved or unsaved. It really has a great impact. Could reach those unsaved! Although, I thought the Antichrist was a much better actor in “Revelation”. This one was kind of silly. Some really good acting and some not. The reporter I don’t think was that great, but she’s gotten a little better each movie she makes. Howie Mandel was believable, as he is already a little strange, but I liked him a lot in this movie. He was pretty good in a serious role. I was impressed. My Ratings: [Good / 4½]
Kim, age 33
Neutral—True, “Tribulation” is a big step up from the humble beginnings of “Apocalypse”. A friend of mine even said she prefers it over “Left Behind.” (She, however, is no movie lover.) Your reviewers dug themselves an early hole however when they gave “Apocolypse” a gushing 3½ stars. When you start with little more than stitched together news clippings, you have no where to go but up. Now we are at 4 stars. Out of what? 10? But, that is not my main point. “Tribulation” is enjoyable, but please, view it first before you show it to anyone else. I found myself embarrassed viewing this fairly far-out story with my parents. This is not the conservative “most likely” scenario you’ll find in “Left Behind.” It is wierd. My Ratings: [Excellent / 3]
Wade Ogletree, age 32