for sexual content and dialogue, violence and thematic elements. 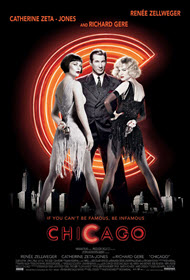 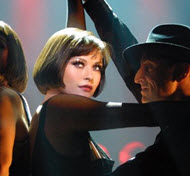 One of the accusations made about entertainment is that it uses beautiful music and dazzling lights to entice us into accepting immoral and unethical behaviors. Do you believe this to be a problem, or do the “lights of Broadway” simply reveal what is already within our hearts? Do films bring out the immorality within the viewer or cause immorality?

When the legal system is manipulated for fame or profit, the injustice undermines the society at large. But what other system of justice would be more effective than our present one? What changes could be made to our present system to keep it from being used by unscrupulous people?

The melodies, the costumes, the tap dancing: for all its traditional show-stopping elements, “Chicago” is definitely not your mother’s musical.

Renée Zellweger, Catherine Zeta Jones, and Richard Gere star in this 1920’s story of bad girls gone worse. Zellweger plays Roxie Hart, a shameless adulteress desperate to find fame on the vaudeville stage. After her lover reneges on a promise to set her up in showbiz, Roxie follows in the footsteps of her idol, Velma Kelly (Zeta-Jones), and murders him—ending up in Kelly’s same cell block to await her trial. Billy Flynn (Gere) is the flashy lawyer both ladies retain to mount their defense.

Following the trend from last year’s reinvention of the musical, “Moulin Rouge”, “Chicago” is stacked with glittering, glamorous numbers. The problem is the “PG-13” rating, which is hugely misleading considering the sensual nature of the songs, story, and choreography. In fact, the opening sex scene between Zellweger and a man not her husband would have been enough for me to bump it to “R”. Like many of the dresses worn to the Golden Globes awards, these ladies may not technically be naked, but hey, who are we kidding here? Also, the movie appears to celebrate the immorality of all its characters, implying “it may be wrong, but if you look good doing it…” Certainly not a message endorsed by Christ.

However, I have to admit that the artistic direction in songs like “They Both Reached for the Gun,” where Gere literally acts as the puppeteer of his client and the press, is particularly brilliant. And the satirical tone taken in the song, “Razzle Dazzle Them” truly speaks to the fallibility of the judicial system and, frankly, the flashiness often rewarded in the legal profession (one could easily picture Johnny Cochran performing Gere’s “tap dance”).

Both Queen Latifah (Matron Mama Morton) and John C. Reilly turn in engaging supporting performances, and it was nice to see a woman with Latifa’s figure treated as attractive—unlike Kathy Bates, whose physique in “About Schmidt” was used as a way to draw gasps of shock from the audience.

Unfortunately, though it is fun to watch Renée Zellweger and Catherine Zeta-Jones (two women whose faces are constantly plastered across the celluloid press) compete for a little newspaper coverage, “Chicago” succeeds in making iniquity look cool. Nobody learns any lasting lessons in this film, save, perhaps, for Zellweger’s long-suffering husband who learns that being a decent, loyal spouse makes him a chump. If you do go see “Chicago”, remind yourself, God will not be mocked and, someday, the consequences for ladies like these will come home to roost.

Positive
Positive—I was disappointed to see the many negative reviews from “Chicago”. I am a Christian and wasn’t at all offended by costumes, lyrics, or choreography. When you think about some of the shows on and off broadway that some people find offensive (“The Producers,” “Cabaret”, “Pippin”, “The Rocky Horror Picture Show”), it isn’t bad at all.
My Ratings: [Average / 5]

Brandi, age 24
Positive—I am absolutely fascinated by the other comments on this movie. It’s Chicago in the mob era. It’s filled with scantily clad women. This was what Chicago was in that era. Gin Joints and Speakeasies were filled with dancers dressed in ways that men who inhabited speakeasies wanted to see their dancers. If you’ve ever seen Bob Fosse’s original musical, the movie is pretty true to form… I’m not saying that this is a movie that is suitable for Christians who may be wavering in their faith, as there is enough flesh shown as to be a stumbling block. But, if you can handle it, don’t let a skimpy outfit or two get in the way of a great movie.
My Ratings: [Average / 4½]

Paul, age 27
Negative
Negative—This film is rated PG-13 because the amount of flesh shown at any one time is not enough for an R, but it is shown most of the time. Every musical number seems to be done in extremely scanty costumes, and there is a scene repeated a couple of times where sex is more than intimated. The actors are good, and the dancers are good, but I’m embarrassed to admit that I saw it.
My Ratings: [Very Offensive / 4]

Robert B. Kabelitz, age 49
Comments from young people
Negative—This movie, like others have said, looked and sounded promising—not being familiar with the musical I had no idea it relied so heavily and I mean heavily on sex… Every song was extremely suggestive (lyrically), including the clothes the actresses had on while singing them. I was shocked and quite embarrassed (having been the one to suggest seeing it) to see a sex scene and killing within the first literally 5-10 mins. of the movie. Needless to say, we left as Queen Latifah made love to a scarf… SKIP THIS ONE!! I’d say Moulin Rouge was less trashy than this one… just skip the first 30 min.
My Ratings: [Extremely Offensive / 5]

Chris Knuff, age 18
Negative—I went to see this movie in the theater with two girlfriends (15 and 16), and the oldest’s father. I had thought that with such a great cast and favourable reviews it would probably be good so we went to see it. I must say if I was alone I probably would have walked out in the first half hour. I think the movie itself is extremely well done in terms of originality, dancing, photography et. all. However, the costumes are almost all very offensive (as in suggestive and more) as is most of the dancing. The whole story is based on the reach for fame and doing whatever it takes to get there including making fun of anything from death/killing to a not-so-smart husband, and lying in many forms, both in the court room and out. The one good thing I can say about this movie is that the fame, legal system, press and cabarets are all shown as just an elaborate facade—pointless and frivilous. Still, it is not something I would see again and not something I would recommend for a Christian to see. “Finally, brethren, whatever things are true, whatever things are noble, whatever things are just, whatever things are pure, whatever things are lovely, whatever things are of good report, if there is any virtue and if there is anything praiseworthy—meditate on these things.” (Phillipians 4:8)
My Ratings: [Very Offensive / 5]

Sarah, age 14
Positive—What a glorious movie this is! I can’t remember the last time I saw a movie more enjoyable than Chicago. This Oscar season has been great, but most of the movies have been downers, ie. “Far From Heaven,” “The Pianist,” etc. This film is toe tapping good fun, and my pick for best picture at the oscars. The film tells the story of two women, Velma (Catherine Zeta-Jones) and Roxie (Renée Zellweger), one is a cabaret star, the other, a wannabe cabaret star, who are convicted of murder and are sent to death row. The only sure fire way to avoid their fate is to get the best lawyer in Chicago, Billy Flynn (Richard Gere). Billy has neer lost a court case and claims “things would have turned out differently” for Jesus if he had lived in Chicago and had 5,000 to pay for him. Billy is currently representing Velma, but Roxie convinces her sucker of a husband ( John C. Reilly) to pay for Mr. Flynn.

Soon, all of Chicago is talking about Roxie Hart, and Velma Kelly is yesterday’s news. Velma does not take this lying down. The musical numbers in this are brilliant, and I anxiously wait for the release of the soundtrack on Jan. 14. The film is for teens and adults and should not be viewed by anyone under 12. The musical numbers may be great, but they sure wear some skimpy outfits during them!

All in all, give this film a shot. I guarentee you will like it. Being a huge fan of “Moulin Rouge,” I could not wait for the release of this film. I saw it when it opened Friday night. I then made two more trips to the theater that weekend, and I plan on making many more!
My Ratings: [Average / 5]