for sequences of strong/bloody violence, language, and some sexual material. 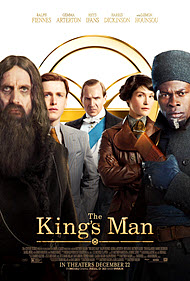 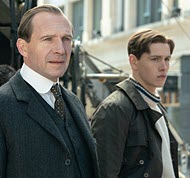 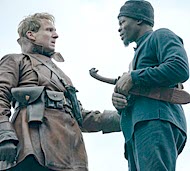 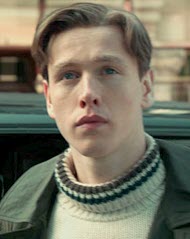 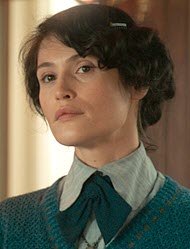 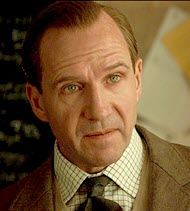 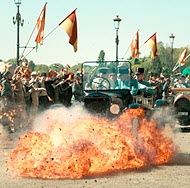 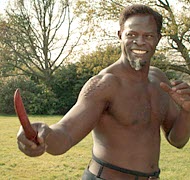 Orlando Oxford (Ralph Fiennes) has spent most of his life in a life of giving. While he, his wife, Emily, and his son Conrad, have been blessed with a life of prestige, Orlando and Emily have impressed upon Conrad that by volunteering their services in the American Red Cross, they are a witness to others that just because you come from wealth does not mean you should not serve others. However, a trip in South Africa turns tragic for the Oxford family during an ambush, and Emily, sadly loses her life in the crossfire, leaving Orlando and Conrad by themselves.

Fast forward twelve years. It is 1914. There are three major superpowers (politically speaking) in play: Britain, Germany and Russia. Britain is ruled by the benevolent King George, Germany is ruled by the Kaiser, Kaiser Wilhelm and Russia by the Tsar, Tsar Nicholas II (all three roles played by Tom Hollander).

For now, things are at peace. But there are more sinister powers behind the scenes, working in secret. A group of people consisting of some of the most notorious figures in world history (such as Rasputin and Mata Hari) are attempting to influence tensions between the three nations, whispering in the ears of the rulers of each nation.

All hope might seem lost, if it were not for people like Orlando who, since his wife’s passing, has started an intelligence gathering agency made of everyday individuals, though it doesn’t really have a name yet (perhaps that part will come later, who knows?). This group consists of himself, his butler, Shola, and Conrad’s nanny Polly. Their purpose? To infiltrate and gather information in places where elected officials cannot dare be seen and, also, when the time calls for it, intervene.

As fate may be, the happenings surrounding these three rulers are on this group’s radar and they won’t rest until there is peace.

Welcome to the club!

Two words come to my mind when it comes to “King’s Man”: revolting and appalling. Just when I thought filmmakers couldn’t make films more offensive, something new appears and I’m like “Wow, I can’t believe they went there.”

Look, my original interest in the Kingsman film series had NOTHING to do with the violence or the action. I watched the first Kingsman film for some of its charm and wit (whatever small amounts that existed). It was a good old fashioned spy film, with large amounts of graphic violence thrown in. The problem with the film series is that the films focused more on the violence and less on the substance; so much so that the series has finally reached the limit in terms of violence, sexual content, vulgarity (and in this film the sexuality).

Even if the violence and content weren’t a large issue for “The King’s Man” (which trust me it truly is), the quality of the film as a whole is just not up to par compared to films in the same genre. The plot starts off fairly simple, for the first 10-15 minutes, and then gets progressively more confusing (and occasionally convoluted) as the film continues. Character development is paper thin, and when characters perish I could have cared less, truthfully.

***PLEASE BE AWARE, GRAPHIC VIOLENCE IS DEPICTED IN THE CONTENT BELOW. READER DISCRETION IS ADVISED.***

VIOLENCE: Please note not every instance of violence is listed. However, in one scene we witness men ambushed, shot and killed, with a woman caught in the crossfire (she dies). A character poisons a young boy leaving him foaming at the mouth, suffering. Innocent civilians are seen being sliced and stabbed by British soldiers in a flashback. A battleship is sunk and people are killed onboard. There is a major fist and sword fight scene. Someone is stabbed with a syringe. A character is shot in the head and another is shot in the face. A goat is killed on screen. Another goat has a horn cut off.

German and British soldiers are seen having a graphic knife fight in a battlefield in the middle of the night (many are stabbed, choked, have their throats sliced, etc.). There are other multiple scenes where people are shot, stabbed, killed and sliced by swords in the film, including a VERY graphic scene where a man has his head sliced off and his body falls off a cliff. In another VERY disturbing, but brief scene, a royal family (with children), is seen being gunned down during a family photograph. A man falls from a mountain and falls to his death (we see the impact on the ground). There is a brief knife fight (the knife is dull and used for training but the sparring partners put some paint on them to leave marks on opponents when they injure someone).

Two characters are shot and killed. Someone is stabbed and pushed underwater; they survive but are later shot in the head and are killed. A man is killed in an explosion. People are shot by a minigun in one scene. Two guys are blasted backwards, one is killed in the process. A person is knocked out.

Other sexual content includes a man kissing a woman passionately at the table. He later says in really crass terms that he never discusses important matters unless he’s eaten or had sex recently. A woman named Polly tells Oxford that a character has a weakness for “sweet cakes and even sweeter boys,” which is why young Oxford brings Conrad to Russia. And when Conrad’s introduced to a character, , some lewd conversation ensues. Two characters (one Oxford) head to a private dining room so that one character can ostensibly look at Oxford’s injured thigh. “Take your trousers off and sit down,” a character says to Oxford, and so Oxford does. We see the gentleman in his boxers for several minutes during the scene that follows, including a strange scene in which Rasputin licks the wound with obvious sexual connotations and Conrad gasps and groans. We see a woman passionately kiss a man.

NUDITY: Two women dress rather inappropriately for the time period. Men fight shirtless. A man is seen in his trousers.

DRUGS: Opium, and a oral drug used from an eyedropper. Characters are seen smoking cigarettes.

ALCOHOL: One character is seen extremely drunk after losing a loved one. Some characters are seen drinking brandy.

OTHER: We witness some starved prisoners in a concentration camp. A character willingly steps in freezing ice water to heal his leg pain. A soldier, who is about to be discharged, switches places with another soldier, so he doesn’t have to go home.

There are no genuine redeeming morals I can draw from “The King’s Man.”

My final words walking out of the theater tonight were, “What a waste of time and talent.” Ralph Fiennes is such a fine, accomplished actor and gives a fairly good performance in “The King’s Man.” Yet, he could do so much better than this. In fact, all the actors in this film could do so much better than this. “The King’s Man” presents some of the most horrific violence I’ve seen in the past few years. There is nothing spiritually uplifting or redeeming in this film. Please avoid this film at all costs.

Secular Movie Critics
…hyperviolent brand of jingoistic action… The King’s Man’s uniformly sees the British as highly civilized, reasonable, and humane, while the rest of the world’s leaders are painted in a derisive light. They’re either ruled by clowns—U.S. President Woodrow Wilson…is blackmailed after being filmed getting a bl*wj*b—or psychopathic, mystical madmen, like the seething Grigori Rasputin… who “f**ks like tigers,” or the monocled lunatic Erik Jan Hanussen …[1/4]
Derek Smith, Slant
…from start to finish, a disappointment…
Mick LaSalle, San Francisco Chronicle
…joyless… devoid of the charming offbeat comedy and pulse-pounding action scenes that made this franchise fun… ultimately a slog to get through…
Molly Freeman, ScreenRant
…mindless… Not even Ralph Fiennes can save this misguided period piece… Though “The King's Man” plays fast and loose with historical details, it doesn't actually change the outcome of any events, which begs the question — what exactly is the point of this exercise? …
Christian Holub, Entertainment
…constant, jarring shifts in tone, and demeans women, a Black character and U.S. troops along the way… Careening wildly from…black comedy…to deadly serious World War I battle scenes, from somber spy thriller to broad comedy, The King’s Man has little of the wickedly outrageous and subversive style of the original film as it flies this way and that and never sticks the landing. …
Richard Roeper, Chicago Sun-Times
…Truth be told, the movie never crawls out from under the pall of those opening acts. It’s hard to lighten the tone after your movie starts in a concentration camp and stumbles into the trenches. …[1½/4]
Roger Moore, Movie Nation
…garbled politicking… inevitably undermined by its hollowness… The Kingsman franchise is really a test of what audiences are willing to put up with in exchange for a handful of cool action scenes. What would you sacrifice to watch Colin Firth bludgeon someone to death with a bible? …[2/5]
Clarisse Loughrey, The Independent
…morally incoherent and historically incontinent… History is just one big playpen for The King’s Man, but some games are less fun than others. Maybe using a glimpse of Hitler for a cheap thrill wouldn’t seem quite so grotesque in a movie that were more entertaining, but The King’s Man isn’t so it does. …[2]
Mark Feeney, The Boston Globe
…depressing, long… Writer-director Matthew Vaughn, who’s helmed all three, needs to either call it quits or hand over the reins to someone with some self-control. …[2/4]
Johnny Oleksinski, New York Post
…ultimately a pretty lousy movie…
Todd Gilchrist, The Wrap