for some scenes of sexuality and nudity. 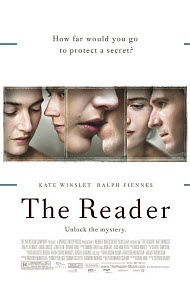 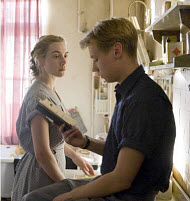 “How far would you go to protect a secret? Unlock the mystery.”

“The Reader” is primarily the story of a boy named Michael Berg, who grows into a man (Ralph Fiennes) with a fair amount of personality issues. This is demonstrated within the opening scene. As the movie unfolds, springing from 1995 to days playing out decades before, we begin to learn that the reasons for this revolve around his affair with an older woman, when he was 16. The older woman, Hannah (Kate Winslet) seduces him, only to later break his heart and disappear. Despite their very brief relationship, the effects of Hannah (and, in many ways, Hannah herself) never stop affecting Michael's life.

Negative: (there may be potential spoilers)

I went into “The Reader” knowing two things. One being the premise of the plot, and two being that there was a substantial amount of nudity in this film. It seems that Kate Winslet is getting quite amount of buzz about her role. Typically being a fan of Kate, and rolls she chooses, I was eager to see what this film would have to offer it's audience. At the end of the two hours and two minutes, I found myself feeling very sad. The character of Hannah is one, in my opinion, who is void of the ability for emotional connection. She seems to be immune to anyone's pain or vulnerability—focused instead only on her own love of literature. Although I wouldn't label her actions as psychopathic, I felt that her emotional detachment could have led there in a different sort of film plot.

I've not read the book this film is based on. Perhaps Hannah's disconnect stems from her time as a guard in the Nazi regime. I didn't feel that it really explained why Hannah seemed to care about nothing, and I wished that it would have.

With the ending, I wanted to feel more about the characters. I wanted to care more about the story, but I couldn't. That isn't to say it wasn't well shot, or beautifully acted because it was… Honestly, I just don't feel there is anything at all redeeming to warrant a recommendation of this movie to anyone.

Positive
Positive—The Reader (spoiler alert) It seems that there is a point in here somewhere. Winslet is a streetcar conductor who is kind to the 15 year old Michael when he becomes ill. Later she seduces him and they spend a lot of time naked in bed or the bathtub. Often he reads to her. She calls him kid, and it seems like the relationship is one sided.

Eventually after she is being promoted to a desk job, she breaks it off and leaves suddenly. A few years later he is in law school, and she is on trial for crimes committed as a guard at Auschwitz. His class watches the trial, but he does not tell anyone he knew her.

During the trial she is accused of being the leader of the Nazi women guards, based on writing the report of an incident where many Jews died. Rather than give a handwriting sample, she confesses to writing the report. He knows that she couldn't have written it because she is illiterate, but she is too embarrassed to admit this.

He has appointment to visit her in jail but runs away, and does not testify to what he knows for her. She gets a 20 year sentence while the other women only get 4 years. While she is in jail, his marriage (probably to his law school lover) breaks up and he is estranged from his daughter.

He records tapes of the books he had read to Winslet and sends them to her. She learns to read. He does not write to her or see her again, until she is about to be released. The prison social worker gets him reluctantly to arrange for a house and job for her, but he seems to reject her attempt at a personal relationship when she reaches her hand to him. Rather than be released, she kills herself, leaving him with some money to give to a Jewish survivor of her crime. The survivor rejects the money but keeps the tin it was kept in, a reminder of one she had as a child.

At the end, Michael tells the story of his affair with Winslet to his daughter. So what is going on here? Is there a connection between his refusal to admit what he knows is true and take a stand that is threatening to him, and the refusal of Germans like Winslet to admit that Naziism was wrong and to take a stand for the Jews?

Winslet tells the court that they allowed the Jews to die in a fire rather than fail in their duty by letting out where they could escape. She was not a Nazi believer but took the job because she needed one. Is she a model for the ordinary people who allow evil to happen?

A problem with the film is that Winslet seems to be three different people as the conductor, the defendant and the prisoner. There is not much to connect them, and not much to help us understand her as all three. Is she redeemed by learning to read? Why does she kill herself when she does? If guilt, why did we not see any evidence of guilt before? Does she feel rejected by Michael? Does she see no life for her out of prison? And what is going on with Michael? Why doesn't he move on with the other women who come into his life? Why is he so distant from them? Is he unable to separate himself from the Nazi past in which she has implicated him? Is he trying to redeem himself for abandoning her by reading to her and sending her the tapes?

Is he redeemed in his relationship with his daughter by telling her the story? There is a point here, some moral issue that goes way beyond the sex and nudity. It is not clear what. Perhaps parts of the book that would have told us were left out.
My Ratings: Moral rating: Average / Moviemaking quality: 3½

Stanley Hirtle, age 64 (USA)
Neutral
Neutral—Having read the book, I was curious as to what Hollywood would do to it. Obviously, the book is always better than the movie, and this movie is no exception. The overall effects, settings, light, etc were done very well. I enjoyed the scenery as they were riding through the country side, seeing old church buildings, and had a few discussions with my husband about the architecture. However, since I did read the book, I knew I'd have to get through the lovemaking scenes; which were disappointing. When will Hollywood learn that what is implied is so much more effective than what is blatantly across the screen? Nudity is a major distraction in a movie, and is becoming similar to kids movies that have to throw in the old stand-by fart joke. I understand the beginning of the story revolves around their physical relationship, but it can be more modest; a shoulder, knee, etc. Most of the love scenes were just to overdone. Anyway, it was disappointing because in the book she grows affectionately towards him, but it never transitions into the film. She maintains a very cool disposition towards this boy. When we got to the courtroom scenes, I was more impressed with the acting. Her fear of discovery is real, and his anguish over her choices is moving.

I returned it the next morning, having no desire to see it twice.
My Ratings: Moral rating: Very Offensive / Moviemaking quality: 4½

Andrea Thomas, age 35 (USA)
Neutral—I found this movie to be haunting, in which more questions were raised after viewing as I reflected on the issues raised within. The nude scenes did little to advance the plot, and could have been implied with the same effect.

Judgement, secrecy, knowing people, morality,and people doing what they needed to do to survive are all poignant questions raised within the movie.

The acting is well done, the issues real, to both post-WWII application and to current political events. I can't get past the sex scenes, however. It seems like the book would be a good read and apparently is very well known in Europe.
My Ratings: Moral rating: Very Offensive / Moviemaking quality: 5

Movie Critics
…Stephen Daldry’s film is sensitively realized and dramatically absorbing, but comes across as an essentially cerebral experience without gut impact. …

Todd McCarthy, Variety
…it is Winslet's haunting performance that gives the film what success it has. … Though this remains a reserved film in which the underlying material is stronger than what's been done with it, enough of it has been retained to keep the enterprise on point. Especially when Winslet is on the screen.

Kenneth Turan, Los Angeles Times
…The whole film, in fact, with its loping pace and plaintive score, feels like a woefully polite, not to say British, take on a foreign horror…

Anthony Lane, The New Yorker
…[2½ stars] …Like a good book with missing pages, The Reader seems stripped of essential meaning. …

Peter Howell, Toronto Star
…[2½ stars] …A better title for ‘The Reader’ has already been used by another Kate Win slet film—‘Hideous Kinky.’…expectations for a satisfying wrap-up, either emotionally or plotwise, are left unmet. …