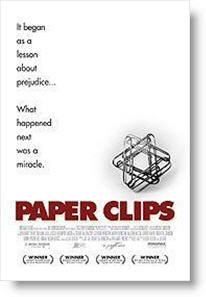 sin, depravity and the fall of man

FROM ONE BLOOD: The Story of Gerrit Wolfaardt

It began as a lesson about prejudice… What happened next was a miracle.

“Paper Clips” is a documentary chronicling how Whitwell Middle School students came to grips with just how many people died during the Holocaust.

Whitwell, Tennessee, is not exactly your bustling big city town, topping out at a meager 1,600 residents. It is not exactly a diverse community either, and the town’s middle school claims only 5 African American students and only one Hispanic among the mass of Caucasians. Linda Hooper, the principal of Whitwell Middle School, wanted to find a way to teach her students about diversity and how prejudice and intolerance can lead to awful things. So, the school began offering a class studying the Holocaust.

When the students taking the class were told that over 6 million Jews were killed during the Holocaust, one of the students commented on how they had no idea what six million would even look like. So, after the students did a little research, one of them discovered the history of the paper clip. They learned that paper clips had been invented by the Norwegians. During World War II, and more specifically the Holocaust, the Norwegians wore paper clips on their clothes as a symbol of protest against Hitler’s reign and persecution of the Jews.

The students decided to collect paper clips in hope of scrounging up 6 million so that they could get some kind of visual on the Holocaust atrocities. The students sent out letters across the country, to family, friends, strangers, and celebrities hoping to strike some kind of chord with them and get a response.

Two journalists from Washington D.C soon heard about their efforts and wanted to see for themselves what was going on down in Whitwell. When they discovered the enormity of the project, they contacted a friend of theirs at the Washington Post. The reporter there traveled down to Whitwell herself and wrote an article for the paper. This was then noticed by NBC Nightly News, which also ran a report on the children’s efforts.

Upon seeing the report, a flood of attention, and paper clips, fell on the small Tennessee town (which leads to one of the film’s most amusing scenes involving the flabbergasted Postmaster). Holocaust survivors traveled to see for themselves what was going on, and were invited to speak at the school.

All of this happened when one principal got a simple idea of teaching her kids a valuable lesson.

There is no offensive content in the film, although some kids may be disturbed by the occasional pictures of emaciated Jews in the concentration camps. The topic of the film makes it primarily for older elementary school aged children and up. But, for those children, it should be required viewing. It teaches valuable lessons on prejudice and intolerance, and gives us a chance to hear moving firsthand accounts of the horrors experienced by the Holocaust survivors.

Some of the people who send in letters to the school get a chance to read them to us in the film, including “Happy Days” vet Tom Bosley. This is an added bonus, and adds a nice touch to the film. The real meat of the film, the best scenes, comes when the Holocaust survivors tell their heart-wrenching tales to the Whitwell residents at the local church. There are few dry eyes in the church, and the same can probably be said for the movie audience.

Having said all that, however, the film never quite takes off the way I was expecting. First time filmmakers Elliot Berlin and Joe Fab present the film in an almost staged sort of way. The first half of the film, up until the Holocaust survivors arrive, drags a bit, and, while the story itself is fascinating, it never quite involves us. I was frustrated watching the film because I wanted to hear the children talk about how this project had affected them. Unfortunately, we only hear from the same three children, and we get far less of them than we do of the principal and two teachers involved with the project.

It is interesting to hear what the teachers have to say, and what they thought about the project. The assistant principal, David Smith, tells about how he grew up in a prejudiced home and how he himself was guilty of racism and intolerance. This is fascinating material, and very revealing. But most of the time the teachers are talking, they are fawning over how great the project is, and how wonderful the kids are, and how if even one child is changed, then it’s all worth it. It almost gets to the point where it’s like watching annoying parents talk about how perfect their children are.

There is no doubt this project had lasting impacts on the lives of all the children involved; the sheer amount of work the kids put into it is admirable in itself. I just wish the film had given the kids more of a voice.

But, in the end, this is really beside the point. The project isn’t about the people involved, but about the message, and that makes the movie well worth seeing. I recommend parents take their kids to see this, or that teachers find a way to show this in the classroom once it comes out on DVD. The message of the film is worth presenting to today’s youth, and could spark some great discussions on how we can help combat hatred and prejudice in our world.

Positive—Excellent film dealing with learning about another culture, about loving people who are from a different religion or culture from your own. It deals with commitment and helping to make the world a better place.
My Ratings: Excellent!/3

Flaguy, age 53
News—I just wanted your readers to be aware that Kar-Ben Publishing has just published the book Six Million Paper Clips: The Making of a Children’s Holocaust Memorial by Peter and Dagmar Schroeder, the two journalists feature din the film. The book, which tells this wonderful story, is available in both hardcover and paperback on Amazon.
My Ratings: Good/4