Today’s Prayer Focus
In My Country
also known as “Country of My Skull”
MPA Rating:

for language, including descriptions of atrocities 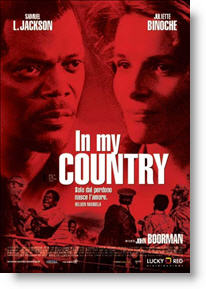 See the award-winning Christian movies on racial reconciliation in South Africa:
FINAL SOLUTION and
FROM ONE BLOOD: The Story of Gerrit Wolfaardt

The origin of bad—How did bad things come about? Answer

Are black people the result of a curse on Ham? Answer

A South African Story of Truth, Love and Reconciliation

This movie is based on the book by Antjie Krog, Country of My Skull: Guilt, Sorrow and the Limits of Forgiveness in the New South Africa

“In My Country” deals directly with the sensitive issue of racism and racial crimes committed during the time of apartheid in South Africa. The director of this film, John Boorman (“Beyond Rangoon,” “The Emerald Forest”), has included factual accounts from the Truth and Reconciliation Commission (TRC) hearings throughout this story that he states are “faithfully told.” And while these stories in and of themselves are gripping and dramatic, it seems this overall production falls a bit flat. The subject matter had my interest, and it was in my mind and in my understanding, but it was not in my emotions.

Soon after Nelson Mandela’s release from prison, an Afrikaner poet, Anna (Juliette Binoche … Dr. Ouelet
), decides to attend the Truth and Reconciliation Commission hearings and write a book about it. Though her family disapproves and accuses her of taking “their” side, Anna explains she is out to do what is fair and honest and discover the truth. When Anna meets a Washington Post journalist, Langston Whitfield (Samuel L. Jackson) at the hearings, she is challenged by him, too—but this time is accused by him of being just as guilty as the whites that committed heinous crimes during apartheid. Her struggle with Jackson eventually leads to a short-lived affair, while in the process bringing to the surface issues within her own family she has not known before.

While some of the subject matter deals grossly with violent crimes, there isn’t much of it that is actually shown. The beginning of the movie does include some real footage of white policemen pummeling various men, and one scene at the end entails a dramatic moment where a man is shot in the stomach. Besides these instances, the violence of the film is only talked about. But even this can be quite unnerving. There is also some foul language, including the f-word and the implication that Anna and Langston sleep together. One scene also involves the main characters drinking and getting a bit tipsy.

It is more than appropriate that a film should be done revolving around the Truth and Reconciliation Commission hearings. The most interesting part of the film was seeing how the hearings were set up and some of the reactions of people who had tragically lost loved ones. Some of the tales are gruesome, while others have touching moments of sincere reconciliation. The story seems to cover the spectrum between perpetrators who confessed their crimes and were sorry with those who are not a bit remorseful and, due to their level of involvement, will most likely not get amnesty.

The most touching moment was when a man confessed to killing a boy’s parents and promises to do whatever he can to help the boy. After a moment of staring at each other face to face, the boy steps forward and hugs the man who was obviously broken for what he had done.

Interestingly, before one of the hearings, a hymn is sung entailing the lyrics “Your will be done.” Not long after the hymn, someone asks, “Where was God when we needed Him?” Considering the atrocities that occurred, it seems it may be easy to ask this kind of question. The things people suffered during apartheid—some of which are detailed in this movie—are absolutely horrible. This question does cause one to think what God’s involvement is when things like this happen. Why is evil seemingly allowed to have its way at times? What does God think about this? Without trying to answer all of those questions here, poets in the book of Psalms also ask these same kinds of questions, but also point to putting hope in God.

Furthermore, while these atrocities did run rampant for a while, as we know, they were eventually brought to the light and dealt with. What seems amazing, too, is that most of the perpetrators were promised amnesty—if only they would confess their crimes. While there were various arguments around providing amnesty, it does highlight something beautiful about the nature of God. Just as these guilty perpetrators would be forgiven if they confess their crimes, so are we forgiven when we confess our sins to God (1 John 1:9). And He does not require us to pay Him back. Because of His love, He sent His Son Jesus to suffer and pay the price for each of our sins.

Hopefully, more films will be made about the TRC and attempts at resolving racial conflict in South Africa. Overall, this film attempts something honorable and uplifting, but didn’t seem to do justice to the drama of these events.

Movie Critics
…film with great ideas—and important ones. Frustratingly, they are undermined by Hollywood plot contrivances, generally poor writing and at least one case of woeful miscasting…

Bob Strauss, L.A. Daily News
…patronizes its audiences by upstaging the suffering of the faceless thousands with the more pressing angst of the movie star… If John Boorman has made a worse picture, it’s news to me.