for depiction of violent political oppression 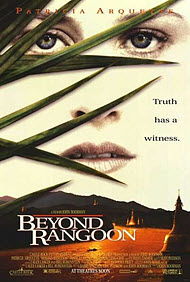 “Truth has a witness.”

At nearly the same time the world watched the TV images of Tiananmen Square, the military regime in Burma (now Myanmar) was crushing pro-democracy demonstrations, but with no cameras allowed. This film by John Boorman (The Emerald Forest; Hope and Glory), billed as “Inspired by Actual Events,” is an attempt to belatedly call world attention to that nation’s political problems.

American physicians Laura Bowman (Patricia Arquette) and her sister Andy (Frances McDormand) take an exotic vacation in 1988 Burma, partly to get Laura’s mind off the recent murders of her husband and young son. As if she didn’t have enough problems already, Laura can’t sleep and decides to wander downtown Rangoon at night, where she finds herself in the middle of a confrontation between demonstrators and the military. She’s fascinated by the sight of democracy leader Aung San Suu Kyi (Adelle Lutz) bravely walking untouched through a line of upraised rifles to address the crowd. Back at her hotel, Laura is harassed by the authorities for breaking tourists’ curfew. She’s also lost her passport, and is accused of having sold it on the black market. Left behind by her sister and the rest of the tour group while the American Embassy creates a replacement passport, she has a day or two to herself.

Laura is played in an interesting way by Arquette. On one hand she’s depressed and morose, seeing visions of her lost loved ones. In spite of that—or perhaps because of it—she has no qualms about taking risks. When she meets a friendly older gentleman (U Aung Ko) who tells her that one must go “beyond Rangoon” to see what’s really happening, she gladly accepts the challenge and lets him be her guide. She later learns that he’s a former University professor who lost his job for harboring and aiding dissident students.

The film doesn’t have a plot or three-act structure in the usual sense. Instead, it’s a montage of chase scenes and images of the killing of civilians, ending with Laura and her guide attempting to escape across the border to Thailand. Since the deaths of her family, Laura had been a nonfunctional physician, unable to stand the sight of blood. Now faced with suffering on every hand, she’s forced to “get over it” and become productive again.

Arquette’s portrayal of Laura, and the musical score, were both criticized harshly. Silly me, I liked both. I don’t know the intricacies of various Eastern music traditions, so I can’t tell when the wrong type of melody is being plagiarized. And I believe Arquette goes through the stages of grief realistically.

Content Warnings: Mild language. Many on-screen killings, mostly of unknown background characters. Think “The Killing Fields,” but with a lower body count. Enough violence to put the point across and more, but not the entire focus of the film. One scene where a soldier intends to rape Laura, not knowing that she has a handgun.

Although Laura shows some interest in Buddhism, the film makes no strong implication that that or any Eastern philosophy was directly responsible for her reawakening. And, in my opinion, the visions of Laura’s husband and son are not intended as anything supernatural but rather as the normal process of “letting go.” Therefore I have no objections to the film on either of those counts.

Some title cards before the roll-up credits point out that, as of the film’s release date, the situation in Burma still hasn’t been resolved. It’s clear that if this kind of political unrest occurred in an oil-producing country, the U.S. and the world would take more serious note of it than just giving Aung San Suu Kyi a Nobel Peace Prize. On the other hand, it’s my understanding that the once-prosperous Burmese economy was destroyed by an experiment in socialism, and the military was trying to rescue the country by restoring a market economy. Although U Aung Ko’s character name is the same as his real name, he ISN’T playing himself. He was actually a longtime member of the Burmese Communist Party. If you watch this film, it’s appropriate to become angry at the sight of repression. But check the history carefully before reaching any conclusions.