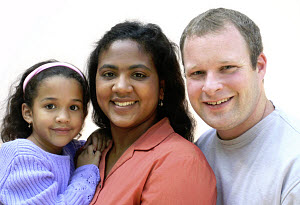 Skin color has long divided people. The prejudice of racism is worldwide, even today. Thus, this question is of great importance. In America, as we continue to see the influx of people from all different cultures, who have all different colors of skin, it is imperative that we search the Scriptures so see how we should live.

Some people believe that interracial marriages are prohibited in the Scriptures. Often they will argue that marriage with foreigners (implying people both of different culture and color) was prohibited throughout the Old Testament.

Actually, the prohibitions were not strictly against Jewish-Gentile marriages as racial mixture, but against believer-unbeliever marriages (cf. Deuteronomy 7:3).

Solomon was judged for marrying, not simply foreign women, but foreign women who believed in false gods. In fact, in the Old Testament provisions were made for Gentiles to convert to Judaism (cf. Exodus 12:48, 49).

One should also remember both Rahab and Ruth, Gentile women of faith; they were both accepted into the community of believers (they are even in the genealogical line of Jesus! Matthew 1:5).

“But,” someone may say, "the New Testament prohibits being unequally yoked. Therefore, people of different races shouldn't marry."

The passage being referred to here is 2 Corinthians 6:14f. This is where the apostle Paul rhetorically asks, "What fellowship hath light with darkness?" In accordance with the Old Testament teaching, Paul is simply prohibiting believers from intimate fellowship with unbelievers. The context speaks nothing of skin color.

There are absolutely no grounds in either the Old Testament or the New Testament to prohibit interracial marriages.

Thankfully, God does not judge humans by mere external appearances. Though humans have a tendency to judge people by how they look, including their skin color, God does not judge us by color; He judges the heart. The beauty of God's judgment is that he is “no respecter of persons” (Acts 10:34), and thus we are to judge the same way (1 Timothy 5:21; James 3:17).

You see, God has created all things, including the color of our skin (Genesis 1-2). We all come from the first man and woman, Adam and Eve. The apostle Paul taught the same when he declared that God created all things, that He is the Lord of heaven and Earth, and that He made all nations from one man, Adam (Acts 17:24-26).

Sometime after Adam and Eve fell, God established a covenant with Abraham. This covenant was intended to be international in scope—irrespective of cultural boundaries or skin color, that through Abraham's offspring (“seed”) all the nations of the Earth would be blessed (Genesis 12:1-4).

These hopes and promises have been fulfilled in Christ Jesus.

The apostle Paul tells us that the promised seed of Abraham was Jesus Christ (Galatians 3:16). The beauty of the ministry of Christ is that in him there are no barriers between Jew and Gentile, slave and freeman, male and female (Galatians 3:28); there is neither circumcised or uncircumcised, Barbarian or Scythian in Christ (Colossians 3:11). And those who become followers of Jesus are part of Abraham’s seed and heirs of His (Galatians 3:29).

On the day of Pentecost, God began to pour out His Spirit on all people (Acts 2; fulfilling Joel 2:28ff.).

The early ministry of the apostles was hindered to the extent that they failed to see that Gentiles were to be accepted into the body of Christ, without being converted to Judaism first (Acts 10:14, 28; 11:2-3, 8).

Oh, and if you recall, in a heavenly vision, the apostle John was able to see clearly the plan of God fulfilled. Here, before the throne of God and the Lamb, in heaven, a great multitude was standing arrayed: they were from every nation, tribe, people and language (Revelation 7:9ff.). This inspiring scene accords perfectly with our Lord's greatest commission, "go and make disciples of the nations" (Matthew 28:18f.).

So, we have seen that there is no prohibition against interracial marriages in the Bible. We have also seen that God's plan of salvation includes drawing his people from every nation, tribe, people and language.

May we have this same desire, eschewing all forms of racism and ungodly prejudice.

Some final comments are in order.

For anyone considering marrying a person with different skin color or from a different culture, there are consequences that must be taken into consideration.

First, there will be opposition and condemnation from some people in society.

Secondly, children of interracial marriages are sometimes discriminated against and teased. In fact, if you think about it, many forms we fill out give us the option to note whether we are “Black,” “White,” “Hispanic,” “Asian,” and “Other.” I guess that if you are the child of an interracial marriage (and therefore, multiracial), you are “Other” (a strange way to label people).

Finally, as the old saying goes, when you marry the person, you marry the whole family. One must be prepared to encounter familial ostracization and condemnation.

But all of these difficulties have been encountered by Christians for almost two millennia, though often for reasons other than interracial marriage.

May our great and gracious heavenly Father richly bless you as you seek to bring every thought captive to the obedience of Jesus Christ our Lord (2 Corinthians 10:5).

Copyright © 1996, 2000, Summit Ministries, All Rights Reserved—except as noted on attached “Usage and Copyright” page that grants ChristianAnswers.Net users generous rights for putting this page to work in their homes, personal witnessing, churches and schools.