for violence, disaster action, strong language, and some drug use. 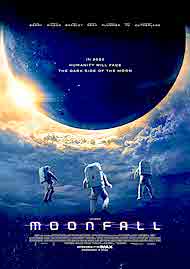 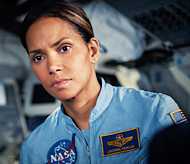 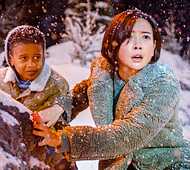 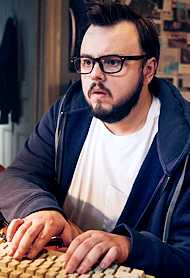 CREATION—Order of the creation of the universe

EVOLUTIONISM—Has the origin of the solar system been determined? Answer

Are we alone in the universe?

A malevolent form of artificial intelligence created by aliens 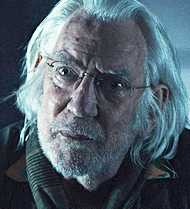 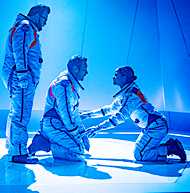 January 12, 2011. Astronauts Frank Harper, Jo Fowler, members of the Endeavour, are huddling millions of miles above the earth fixing a satellite for a space shuttle. As they are about to finish, a mysterious space entity begins attacking Frank and another member who are working in space on the satellite (while Jo is inside of the ship, the Endeavor). As a result, a member’s tether, attached to the satellite, is detached during the attack, and he disappears into the vastness of space. Later, when Frank is called by NASA to account for the actions that occurred, NASA calls Frank’s explanation crazy, as does Jo, and Frank loses all credibility as an astronaut.

Fast forward 10 years. Frank’s life has gone from bad to worse. He’s divorced, his son has stopped speaking to him, his living conditions are a mess, and he is out doing, mostly, pro-bono speaking engagements about his experiences as an astronaut. While at an appearance, a scientist named KC Houseman tries to share his shocking discovery with Frank… the moon is out of orbit and will be colliding with the Earth. Frank completely dismisses the idea. But enough about Frank!

Whatever happened to Jo? Well Jo has been doing great. She continues to thrive at NASA. For a while, things have been pretty smooth for her at there. Until she ends up making the same discovery KC does about the Moon’s orbit. “You’re telling me that after 4 million years the Moon’s orbit has suddenly changed?” Jo states. Uh, yeah, that’s the idea.

There’s a bad moon on the rise.

Some concepts, at first glance, just seem absurd even before you know much about the film. With a movie like this, the absurdity is right in the title… ”Moonfall.” I remember the film’s teaser several months back. My first reaction was, “Oh no, really?” That reaction increased for me after viewing the full trailer.

Still, I accepted the assignment for “Moonfall,” hoping to give this film the benefit of the doubt. I mean with a casting lineup consisting of Halle Berry, Patrick Wilson, Michael Pena and Donald Sutherland, I wanted to give the film a shot. So I did. Not only did I see this film once, but I saw it twice. Once without a clipboard and my review sheet, and once with.

My overall take? “Moonfall” is as ridiculous, and oftentimes confusing, as the trailers made it out to be. The dialog, in many places, is either awkward, forced, or disjointed. The pacing is pain-stakingly slow in parts (a whopping 2 hours and 20 minutes!). Also, for a sci-fi film, the SCIENCE aspect of the film didn’t make any sense, and I actually enjoyed science in school (and yes, I get that the other part of the word science fiction is FICTION, but still, there has to be some scientific truths in places).

Speaking of truth, in the final act of the film (about 25-30 minutes in length I gathered), there is a huge slap in the face to the very concept of Creationism. Additionally this final act contains elements involving Secular Humanism and hints of Evolutionism. To put it simply, the film is blasphemous at the end (my mouth dropped).

To the film’s credit though (as I do try to find at least ONE positive thing in each film), the special effects were incredible. In particular, there is a scene toward the beginning of the final act (and this doesn’t spoil anything I promise), where a “gravity wave” is occurring around a spaceship that is lifting off (waves are literally spiraling in the air around a spaceship due to the moon’s gravitational pull). Additionally there are some absolutely beautiful scenes that take place in space.

As previously mentioned there are themes that stand in defiance of creationism and God in general.

VIOLENCE: Very Heavy. We witness a high speed chase on television. An alien-like entity is seen attacking three astronauts, killing them by sucking on their faces (we revisit this footage twice). In a few scenes, we witness some massive destruction caused by the change in the moon’s orbit, including the destruction of buildings, cars, mountains, and the like (some buildings are even flooded by high tides). A man is sent flying into space after he is detached from a satellite he is working on. We witness someone struggling underwater.

Two guys are seen robbing a store. People are carjacked. We see rioting and gunfights on news footage. An earthquake rocks a building with people inside. We see people as well as buildings being pulled into the air by the Moon’s gravitational pull. Someone shoots at the ground near some kids, trying to defend their property. A car accident occurs with kids inside. People try to rob someone at gunpoint.

A spaceship crashes. A dad sacrifices his life by giving the rest of his oxygen to save his daughter. We witness buildings on fire. A person is blown back by a falling meteor and a tree lands on him. Characters die in an underground bunker.

DRUGS/ALCOHOL: Someone is seen anxiously taking pills frequently. A person is seen smoking “weed,” and there is a comment about another person have smoked lots of “weed.” A person is mentioned as having been in possession of illegal substances during a high speed chase. There is also beer drinking.

SEX/NUDITY: A newspaper headline reads “Gay Aliens.” We see a guy in his pajama shorts and a buy in his boxers.

OTHER: A character breaks into a professor’s computer to download data. A cat is said to have urinated on some newspapers. Someone mentions having IBS and other medical issues. We witness dead birds dropping from the sky due to the lack of oxygen on Earth.

As I stated early, there is a portion of this film that discusses the very foundations of creation and how life on Earth came to be. While the film may not give proper credit, it would be irresponsible, as a Christian, to ignore the real truth regarding the origins of Creation; that God Almighty is the only being responsible for the creation of all living and nonliving things that roam this Earth.

“In the beginning, God created the heavens and the earth” —Genesis 1:1

“Then the Lord God formed the man of dust from the ground and breathed into his nostrils the breath of life, and the man became a living creature” —Genesis 2:7

Since we are God’s creation, what is his purpose for us?

“For we are his workmanship, created in Christ Jesus for good works, which God prepared beforehand, that we should walk in them.” —Ephesians 2:10

Looking for answers about Creation and Evolution. Visit our Creation SuperLibrary — filled with content provided by a top team of experts from various respected Creationist organizations who answer your questions on a wide variety of topics.

My thoughts on “Moonfall” come down to one word: ridiculous. Am I being too harsh? Perhaps. In finer hands and with a more refined script, with perhaps some changes in the plot, this film would have had some process. The A-list cast does their very best with what they have (and trust me, they give some solid performances), but the film just doesn’t work because the pieces don’t add up in the end (the audience is also left with FAR more questions than answers, including a cliffhanger that made this reviewer go “What?”).

Truthfully, though, it was the attack on creationism and on God as the Creator that got to me in the end. Some might say I have thin skin, but I say I’m just tired of God, and Christianity for that matter, being mocked in subtle and not so subtle ways. (There was a preview for a film by the same production company of “Moonfall,” Lionsgate, for a film called “The Devil's Light,” about a nun who wishes to serve as an exorcist and feels she needs to help drive out demons from a young girl. In the preview, there is a moment where the nun actually looks like she is possessed herself.)

As for “Moonfall,” the film is a miss, even without the spiritual issues in play. Large amounts of violence, vulgarity, profanity and pacing problems make the film a hard pass. Do yourself a favor and skip this film.

Neutral
Neutral—Think “From the sublime to the ridiculous.” Think every disaster movie trope and clichéd scenes, subplot, and dialogue, with several real “conspiracy theories” woven into every over—the-top special effects scene pushed to infinity… and beyond! by a gazillion SFX artists. Was it intentional? Lines like “It’s set to airplane mode!” “We're in ludicrous mode” and characters ignoring entire mountain tops blown up nearby, made me think so. Was “Moonfall” playing at being a “serious” disaster movie while reminding me of “Dr. Strangelove”? If only the script had been funnier, tongue-in-cheek and more obvious, like Airplane!, more people may have gotten the humor. If that was what was intended. I thought the cast, especially John Bradley, did well with what they had.
My Ratings: Moral rating: Offensive / Moviemaking quality: 4½
Tori, age 50+ (USA)

Secular Movie Critics
…For two hours, I sat in a movie theater in a state of utter stupefaction. How, I wondered, did this movie get made? …There’s nothing worthwhile here; the landscape of wretched banality offers only wasted time and a sense of despair. …[0/5]
James Berardinelli, ReelViews
…really bad… gibberish big-budget folly… the formulaic silliness…is just tiring… [1/5]
Peter Bradshaw, The Guardian (UK)
…“Moonfall” is a disaster epic that feels cramped and hurried, implying massive scope but not doing much to show it. …mostly Wilson and Berry are mere tools of a sloppy plot… The grim fact of “Moonfall” is that it’s awfully boring, a lifeless assemblage of confusing CGI and pat characters we barely know. …
Richard Lawson, Vanity Fair
“Moonfall” isn’t even laughably bad… There’s barely a hint of fun and nary a drop of pathos in any of this. …
Roger Moore, Movie Nation
…Roland Emmerich debacle is a waste of space… loony plot is dotted with action sequences that are too preposterous to be captivating… What gives you whiplash, however, is the final half hour, in which the movie is wrapped up in the most neat and nonsensical way imaginable. … [1/4]
Johnny Oleksinski, New York Post
…“Moonfall” is bad – the wrong kind of bad – because everything in this formula fails to hold up its end of the bargain. The effects are muddled; the supporting cast is terrible. …
Matthew Monagle, Austin Chronicle
“Moonfall” is a moonfail… You will actually hear your brain cells commit seppuku as you watch it. …Emmerich just tossed every sci-fi and disaster trope he could think of into a blender and hit “liquefy.” The result’s a whole lot lumpier than most palates will prefer.
Mike D'Angelo, The A.V. Club
…“Moonfall” is a lumbering, long locomotive of one cliché attached to another, making time pass slowly even though there is so much juggling of these different one-dimensional relationships. …
Nick Allen, RogerEbert.com
…We’re promised the Moon, but sold a lemon. …
Tim Robey, The Telegraph [UK]