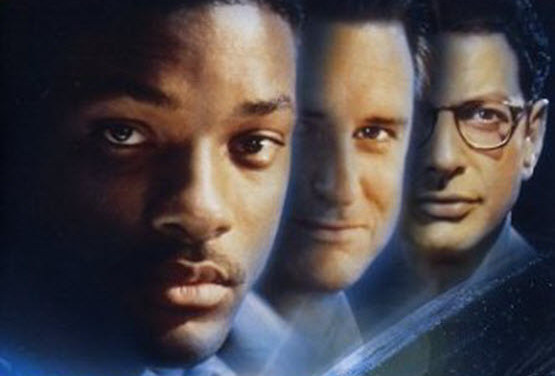 for sci-fi destruction and violence. 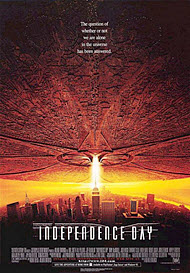 Looking for an exhilarating, fast-action, suspenseful, large-scale special effects movie? “Independence Day” is a blast—reminiscent of some of the spectacular films of days gone by. This is Earth versus aliens—a sci-fi war disaster film, complete with the latest (1996), state-of-the-art effects and sky-darkening 15-mile-wide ships.

“Independence Day” has a relatively big look, shot in locations around the world with a large, talented cast of characters. As might be expected, you won’t find any Christian theme here, except a plot that promotes personal heroism, self-sacrifice and cooperation among peoples. And, of course, the film’s premise is based on the modern mythology of our culture, the assumed existence of extraterrestrial beings (and we are certainly not talking angels here). Incidentally, Director/Producer Roland Emmerich says he does not believe in aliens, but simply enjoys designing fantasies that ask exciting “What if” questions—like “What if you walked out of your door and these enormous spaceships hovered over every city in the world?”

“Independence Day” combines elements of “The War of the Worlds” and “Star Wars.” The advanced technology aliens (only seen briefly) are horrid, tentacled creatures who descend “like locusts” on planets to ravage their natural resources. When they arrive without warning on Earth, the skies ignite. Cities are overcome with fear. Massive destruction follows… soon whole cities lie in ruins.

The film contains very little crudity, no sex, and no nudity, except a short scene showing a some exotic dancers in revealing costumes at a sleazy nightclub. Also, star Will Smith is shown getting out of bed with his girlfriend (whom he later marries), and apparently urinating while looking out of his bathroom window (not graphic). Although the movie contains some profanity, integral to the action, the language is surprisingly tame compared to that in most recent Hollywood productions.

The violence is almost entirely non-personal, depicting the mass destruction of cities and crowds by hovering alien ships, plus aerial combat scenes of the “Star Wars” type. This film is not for young children, due to the intense action, awesome destruction, very scary-looking aliens, and a short, slimy operation on an injured alien; all would likely produce nightmares in little ones.

As might be expected in this almost comic-book-like genre, there are weak spots and clichés in the script, but it’s all fun nonetheless if you are willing not to hyper-analyze the story. “Independence Day” is an entertaining mix of action, frequent humor, suspense, and a happy ending. It looks best on big screen. This is one of the few movies where I have seen the entire audience break into a spontaneous cheer at the end!

[Stars include, Will Smith (who plays a wise-cracking, confident character, a bit like Harrison Ford’s Hans Solo in “Star Wars”), Jeff Goldblum, Judd Hirsch, Randy Quaid, and Brent Spiner (“Data” on “Star Trek the Next Generation”).]

To learn more about extraterrestrial life from a biblical perspective, see:

It’s nice to see a movie that you don’t have to flinch at when you watch it with your teenage boys. Why can’t they realize that movies like this please more people and make more money without being graphically violent or smutty.

Barbara Davidson, age 42
While I enjoyed the mindless entertainment of the movie, the proliferation of alien movies and TV shows may be a subtle plot to undermine the Christian Church. Preparing society for a “revelation” that aliens exist would give New Agers ammunition to “disprove” a Bible that never took aliens into account…

Michael, age 34
I must say I’m a little disappointed at the reviewer’s claim that the harsh language was “integral to the action.”… John Ford didn’t need foul language to make an edge-of-your-seat action scene believable; Hitchcock didn’t either—until Standards and Practices made a shift, and pressured him at the end of his career. Let’s embrace what’s good—and acknowledge garbage for what it is. Pardon the sanctimony… but Christians are experts at sitting on their hands.

Bill Flowers, age 36
Pure Hollywood factory line stuff. Nothing surprising. Good effects? So what!! They can do anything now—“Twister” is testament to that—so big special effects are losing their effectiveness. Good entertainment, but nothing more.

Richie Rich, age 21
In a summer of thrill-ride movies, this is probably the biggest roller coaster of them all. If you don’t mind stretching your willing-suspension of disbelief, it’s quite a ride. …As far as ID4 is concerned, look closely at the interior of the “alien” space craft. Alien characters that are roughly 8 to 10 feet tall, with bulbous, massive head regions and thin dangly tentacles… evidently build ships with GM seats, complete with head rests placed for optimum human comfort. How thoughtful…

Suzan, age 39
Aside from a few logical and technical inconsistencies, it’s a TERRIFIC MOVIE! The special effects and sheer magnitude in the cinematography is beyond all other movies before it. Of course it’s far-fetched—of course it’s got campy/cheesy spots—it’s ENTERTAINMENT! Some of you folks need to lighten up—this movie is far “cleaner” than the typical, godless Hollywood fare being served up on the big screen.

Some scenes were actually positive—like when the broken-down drunk ends up laying down his life as a hero. …The panic which ensues when the ships first arrive reminded me of what it will probably be like when the Lord comes back to rapture the believers up into the clouds with him.

Norman Sawyer, age 34
The portrayal of a stripper, an intoxicated kamikazes, and a foul mouthed president as “heroes” is unacceptable by any standards. I regret funding this industry and the large volume of trash that is provides.

Kurt Abbey, age 33
This was a fun film if you are a fan of the Star Trek/Star Wars genre. If not, you still might enjoy it as an introduction to science fiction film.

Tony Heringer, age 33
I enjoyed the comments about this movie almost as much as I enjoyed the movie. …when we go en masses to see movies that do not glorify gratuitous sex and violence as so many movies do, we are likely to impact those who write and produce these pictures. I think that movies like ID4 are definitely moving in the right direction…

Warren Grantham, age 39
I think you have to get into this movie by sitting back and being entertained by the special effects. If we analyze any movie, some of us can always find fault with it. I am not one for compromising my integrity, and I don’t feel I had to while watching this movie.

If anything, it does spotlight the issue that peace would only come on this planet when people around the world unite on a common enemy—too bad we can’t convince the world to unite against sin in general. That will never come about, so just go to a budget theater near you when ID4 arrives and enjoy getting away from reality for a while…

Mike, age 50
Comments from young people
I don’t know what people are so hyped up about. No, the movie wasn’t Christian, it was pretty good. But, it’s just a fiction movie, the people that made it are not saying that it’s true. There have been worse movies, I’ve heard more cussing in one day than in that whole movie. I thought that there was going to be more stuff like sex, or that it showed people have there arms ripped off or something. That’s why I was skeptical of seeing it.

Yes, there are a few places they could have left out, but I’ve never been to a movie where the audience was jumping and clapping for the good guys to win. I thought it was pretty good.

Michael Kaess, age 14
BEST MOVIE OF ALL TIME! (Along with DragonHeart) TERRIFIC special effects, UNBELIEVABLY GOOD plot, and mass destruction in it to boot! This is the kind of movie that makes you sick when you think that ET was the top grossing movie of all time when there are movies like this in the world.

Brian Solomon, age 14
I really thought the movie had cool effects and it had a great story. I’m a Sci-Fi fan, so I really enjoyed it.