for sci-fi action/violence, some sexuality and brief language. 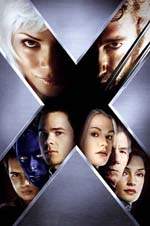 The X-Men return in this much anticipated sequel as they continue to fight to bring peaceful unity between humans and mutants, while darker forces seek a destructive war between the two. This time, a former Army commander, William Stryker (Cox), leads the anti-mutant movement, instigating an underhanded war. The danger from him becomes so great that the X-Men must unite with Magneto (McKellen—the mutant villain of the first movie who still seeks domination) in order to stop him.

The trouble begins as Wolverine (Jackman) returns to Xavier’s School, a.k.a. the X-Mansion in order to ask Professor Charles Xavier (Stewart) for additional help after his search to discover his past leads to a dead end. Instead, he finds himself left in charge of the Mansion while the rest of the team goes out on a mission: Storm (Berry) and Jean Grey (Janssen) head off to retrieve a mutant who is wreaking havoc at the White House under the direction of the sinister Stryker.

Evolution continues to be a theme in this film. Mutants are so named because they are humans with mutated genes that give them superhuman powers. In addition, one of character evolves throughout the film. This transformation is a deviation from how it occurred in the comic series, where a powerful cosmic being was involved. But anyone familiar with the series will recognize where this is leading (pay very close attention to the shape of the shadow in the water at the end.).

The violence is also more intense in this film than in the previous installment. Unlike the first film, this one amasses a huge body count. Whereas some Christians will object to seeing Wolverine slicing through his enemies left and right with his adamanthium claws; others will see this as necessary to save the children and his friends, just as a soldier would in a war. However, true to PG-13 ratings, the amount of slaying is tempered by a lack of gore. Only one of the deaths could honestly be considered gross, and it occurs without actual blood.

The movie also contains some extremely suggestive sexual content. There are a couple of scenes featuring passionate kissing and another couple scenes of more intense foreplay—though none come to complete fruition. In addition, some profanity, including three s-words and the abuse of God’s name is sprinkled throughout the film.

One word: Nightcrawler! When facing fear, he prays The Lord’s Prayer. When in mourning, he prays The 23rd Psalm. In a conversation with Storm, he speaks of releasing hatred and choosing faith.

For those who love action flicks, X2 could be worth a visit to the theater. However, hardcore X-fans may consider the inconsistencies of character and ability of certain X-Men a let-down. The inclusion of Nightcrawler’s faith was a wonderful surprise and hopefully it will serve as a light in the darkness to viewers who need the Savior. On the other hand, those with reservations about violence and other worldly displays and themes can expect to see their fears realized on the screen. Parents should certainly exercise their best discretion.

Positive—I liked this film a bit more than the first, mainly because of the new characters. Alan Cumming as Nightcrawler was just great, and his story was very moving, as was that of Iceman and the scene with his family… The visual style was what I had the biggest problem with. Brian Singer is a wonderful director, but sometimes things just felt a little disconnected, like he didn’t fully create the world of the film… However, though it is certainly imperfect, you could do a lot worse at the movies right now.
My Ratings: [Better than Average / 4]
Jason Eaken, age 19
Positive—X-2 takes what was done oh so right in the first of the series and builds upon it quite well. Nightcrawler was awesome, though I wonder why when a Bible believer is played on TV they are always Catholic? Anyway, it is a very aesthetically pleasing film with great action sequences that keep the movie moving. The only bummer was the whole “evolution theme.” It is true that in the comics these characters came about through genetic mutations, but this doesn’t mean that the director had to stress evolution. Regardless, it was well worth seeing.
My Ratings: [Average / 4]
Tony Hook, age 26
Neutral—As a parent, I was pleased that the X-men fought for the right to be accepted, and that Xavier—even after being attacked personally and having his school partially desimated—still sought to end the conflict using truth. What disturbed me was the characterization of Nightcrawler. Even though he is sincere in his beliefs and does not use his mutant powers violently, why was his character made to look like a demon? Also there is sexual content that was too strong for young teens and adolescents. Example: a close up shot of a woman’s behind as she crossed her legs with a very short skirt. And a scene, with Mystic in a another form, agressively coming onto a man. The film is loaded with action, but some fight scenes are graffic (Logan fighting Death Strike). Evolution is taught as fact in the movie. My advice would be to use caution when considering this film.
My Ratings: [Average / 3]
Pam Voller, age 41
Positive—One of the best movies I’ve ever seen. Much better than the first. The only qualms I have are the scenes of Mystique using her sexuality to her advantage. And her “outfit” leaves much to be desired. Overall, though, I think it’s a great movie, but not for small children.
My Ratings: [Average / 4]
Daniel, age 16
Positive—X-2 is, overall, harmless. There are a couple s-words and some comic book-type violence (think Spider-man). However, Nightcrawler is an outstanding character who demonstrates more outward faith than most Christians I know. By not being ashamed of his faith, even in the midst of others who are obviously not Christian, Nightcrawler proves to be a very good role model for everyone interested in discipleship. I was equally impressed by the way the director treated Nightcrawler’s faith. Most movies make light of characters’ faith and some even poke fun. X-2, on the other hand, gives Nightcrawler and his spirituality proper respect. I think it is important to note that while the X-Men movies talk about evolution, they also allude to the existence of God. Magneto in the first X-Men talks about God on more than one occasion. It was very enjoyable (at least as good as the first one) and it has something you can take for inspiration, too. Which is more than most movies can attest to.
My Ratings: [Better than Average / 4]
Tim Longbrake, age 26
Positive—This was a great film! Nightcrawler, while creating a humourous character, also managed to introduce the idea of Chrisitanity into this movie. That fact that he prayed in times of trouble and sought repentance for his sins was a great boost to the movie… although it isn’t entirely without fault, i.e., some people may find the idea of evolution offensive, as well as telepathy and telekenetic powers. However, if you overlook this (after all it is a fictional story) you have a really enjoyable action movie. I would recommend it for people over the age of 10.
My Ratings: [Better than Average / 5]
Sarah, age 16
Neutral—The special effects were not bad. There was, however, too much emphasis on evolution. The idea that Nightcrawler could represent good in the movie is strange to me. Except for the scriptures that he recited, everything about him seemed evil. Frankly, I had a hard time seeing any good over evil in this movie.
My Ratings: [Average / 2]
P Gongora, age 38
Positive—I almost didn’t go to this film because of the brief sexual content, but the lure proved too strong. Having spent two hours in a theatre full of exited teenagers, I’m glad I went. I enjoyed every minute of it. The spiritual parallels and content weren’t overt, but present to any Christian seeking them. Nightcrawler was a nice addition, the only mutant with any religious faith; there’s less emphasis placed on evolution here, and more respect toward God. I appreciated the struggle Jean Gray went through, both in her own abilities and her attraction to Wolverine; her choices in the end prove what a strong and praiseworthy heroine she is.

Though I’m strongly drawn to all the characters, Xavier and Magento remain the two predominant figures for study. Magneto has been a fascination of mine from the beginning, and this film gives the viewer more time to spiritually analyze him. Professor Xavier arguably could be considered a God-figure. A compassionate, forgiving man willing to fight for Magneto’s very soul, he remains one of the film’s most likable characters.

Viewers, if they choose to run the gauntlet of X-2’s few but predominant flaws, should keep their eyes open for glimpses of goodness. Truth, like mutation in the world of comic book heroes, reveals itself in many forms of life… and sometimes in the most unexpected of places.
My Ratings: [Better than Average / 5]
Charity Bishop, age 20
Negative—Looking at my ratings, you might think I didn’t like the movie. That’s not true, as I did enjoy the movie very much. However, looking at this from a CHRISTIAN perspective, there is much to find offensive in this film. For me though, it wasn’t the violence and language that offended me, but the character of Nightcrawler. His obsession with Roman Catholic tradition (praying rosary and self punishment among other things) marred what could have been a great character with Christian beliefs. Remove the rubbish, leave in the prayers (except for Rosary) and you have a Christian character, which would have been cool.
My Ratings: [Extremely Offensive / 3]
Luke Smith, age 21
Positive—This was a truly outstanding film that definitely deserves applause from comic book buffs around the world. For those who have grown up reading the X-Men comic books, this film truly realizes the X-Men in the epic feel they deserve to be seen on film. It’s like a whole new series of comic books being put on film and this new outing is the best comic film ever to grace film. With the addition of newcomer Nightcrawler, we are given an awesome Christian character who relies on his faith in God more than anything. One of my favorite moments in the film was when Nightcrawler states that he thinks God is testing him and then the camera pans to Jesus on the Cross. This movie is a very powerful and emotional film which is a rarity in a comic book film. But you truly begin to love the characters as the film goes on. You see the torment of being differnt and what that entails. For those who like though-provoking comic book films, this one is for you.
My Ratings: [Average / 5]
Luis Cruz, age 20
Positive—I loved it! It was so much better than the first one. It answered a lot of questions from the first X-Men. The actors did a great job; nothing looked fake either. I would recommend it. It was a fun movie to go see.
My Ratings: [Average / 4]
Sarah, age 16