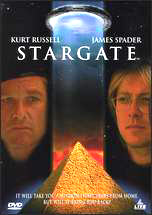 Are we alone, or is there life elsewhere in the universe?

Did a Martian meteorite prove the existence of ET?

Were the nephilim (sons of God) of Genesis 6:4 extraterrestrials?

Egypt in the Bible

The plot is the usual for one of this genre: a very old woman comes to Professor Daniel Jackson (James Spader), the usual nerd for a Roland Emmerich film (“Independence Day,” “Godzilla,” “The Patriot”) and gives him a job decoding an Egyptian artifact known as the Stargate (hence the films name). When he does, Colonel Jack O'Neil (Kurt Russell), a depressed military man, after his son accidentally shoots himself with his father’s gun (not shown in film), travel back through the stargate with a crack commando team and James Spader, who is needed to decode the stargate on the other side of “the known galaxy”. As you have probably guessed by now, there are several things which go wrong once on the other side of the stargate.

One of the things which goes wrong was the arrival of the “Sun God Ra” an evil alien whose race is dying out. Ra’s underlings wipe out the commandos (of course) and O'Neil, Jackson, and a bunch of Earthlings (did I forget to mention that they met a bunch of Earth people there?) and they must battle the astoundingly powerful Sun God Ra (no, no. Alien, not God.) before they can find their way back home.

This film has a great plot and characters, the acting is better than usual, however, it does resolve to gunfire, hand-to-hand fighting, and fighters, and an Independence Day-like explosion to win. I only have a few problems with this film.

Hollywood needs to see that plots are not an excuse for foul language. I found this to be true in “Six Days, Seven Nights”, where the plot became a cussing contest to see how far past the limit they can go.

This movie may provide entertainment value, but followers of Christ should be very alert about its promotion of ANCIENT ALIENS theory, because this is an issue that is truly deceiving a very great number of people, partly because it is presented as scientific and archaeological (both false claims). At its base, it is a lie being used by godless people to “scientifically” explain away Biblical miracles and events—and God Himself.

This tactic started with atheist author H.P. Lovecraft. Years later, this pseudo-scientific idea was famously promoted by Erich von Däniken (Chariots of the Gods) and others. This idea has particularly been used by some whose worldviews are New Age or Evolutionism/Atheism (or both).

The claim is that extraterrestrials with advanced technology came to Earth in ancient times and were mistaken for gods, angels and supernatural activity—and that out of these encounters with naive and unsophisticated humans (who misunderstood what they witnessed), humans began to worship these aliens—and the world’s religions (including Christianity) are the end result.

I have researched these claims in considerable depth, including attending von Däniken lectures. I am in agreement with many other researchers (both Christian and secular), the so-called evidence for this fantasy is filled with foolish errors and serious outright lies and deceptions.

Nonetheless, many sci-fi books, movies and TV shows have eagerly used and promoted what is essentially a dangerous Atheist-inspired worldview.

What difference does it make? When accepted, this pseudo-science leads people directly away from Biblical truth about Earth’s Creation, mankind’s place in God’s plan, Earth’s history of wicked rebellion against the Creator, and the record of His judgments. Inherent in this worldview is rejection of belief in God and the Bible. People are less likely to perceive their spiritually bankrupt state before God and are more unlikely to want—or listen to—the Gospel.

If nothing else, the mere CONSTANT REPETITION of this view of history in entertainment media is causing it to become embedded in the minds of billions of people, making it somehow seem to them less ludicrous than it really is. Discerning Christians know that we and God have an Enemy who is the father of lies who seeks to deceive the whole world.

Positive
Positive—“Stargate” is one of those science fiction movies that is passed over easily, even by those who watch the spin-off shows. I watched it because it sparked interest in me (several plot-lines in the show are started in this movie). Stargate is, in quick run-through terms, a film about a marvelous alien artifact that was unearthed in Giza, Egypt, way back in the 1920s. Fast forward to 1994, where Colonel O'Neil (Kurt Russell) is battling depression and a sweet young Dr. Jackson (James Spader) is out of work due to his crack-pot theories on aliens in ancient Egypt. Combined with an interstellar traveling device, a wonderful supporting cast (Mili Avital, Alexis Cruz, and John Diehl), and the plot of a lifetime, “Stargate” is worthwhile for non-critical science fiction lovers.

What’s not so good: There are some curse words, and taking the Lord’s name in vain, which was very annoying and offensive. Ra (Jaye Davidson) is a poor villain, seeming feminine at times, who keeps a personal guard of scantily clad children. There is a scene that can be skipped where Sha'ure (Mili Avital) is offered to Dr. Jackson (he refuses in a manner that gives him the air of a gentlemen).

Also, this movie does revolve around Egyptian deities, aliens, and the Earth being millions of years old. This is also very annoying at times, but the topic of how old the Earth supposedly is only comes up once in a while.

As a Christian, I watch science fiction merely for entertainment, not because I believe in it. This film is entertaining, but only for those people who can watch it without being too critical.

Yes, it might offend some Christians, but in that case, I would say skip it and watch Star Wars or Star Trek instead. Stargate is a movie for those who love wormholes and can tolerate Kurt Russell’s boot-camp hair-cut. Note: For movie-making quality I gave it 4 our of 5 because for 1994, it truly was great quality. I love their wormhole effect (which is never as cool in the spin-off shows, either) and some shots in Egypt are just marvelous. Well worth the 4, I think.
My Ratings: Moral rating: Average / Moviemaking quality: 4
Caitlin, age 20 (USA)
Positive—An ancient, circle-shaped machine is found in Egyptian ruins. It is then secretly researched by the US army. With the help of maverick scientist Dr. Daniel Jackson (James Spader) the machine is put in operation. The machine, called stargate, opens a spacetime wormhole, through which people can pass and emerge on a planet at the other side of the universe.

An army team, accompanied by Dr. Jackson, passes through the gate and appears on the faraway planet Abydos. Here they find an Egyptian-like nation of slaves. They are Earth people, whose forefathers were forced through the stargate by the alien Sun-god Ra. For centuries Ra has ruled over them, but is now confronted by the army team and eventually destroyed, when a nuclear bomb is exploded in his starship.

The Abydosian people are set free and the army team returns back to Earth. The movie is fairly clean, with few occasional profanities. There are many scenes of combat; some show wounded people and people in physical pain. One torture scene shows Ra killing a man; the scene is quite offensive. Overall, there is little graphic violence, no nudity or sex scenes. If you can skip/ignore the above weak points in the movie, its ideas are thought-provoking. The ancient Sun-god Ra is actually an evil alien, backed up by powerful technology. Pagan worship of the Sun is shown to come from evil, powerful aliens. Their miracles are product of high technology.

In the end, Ra is killed by the rebelling humans. This seems acceptable, because Ra is a pagan god… Yet it also seems that Ra resembles Jehovah and Jesus quite a bit. The movie almost places Ra’s evil character and limitations on the God of the Bible as well. Again, the movie is indeed worth watching; but it contains atheist ideas—something that should be bourne in mind…
My Ratings: Moral rating: Better than Average / Moviemaking quality: 5
Jay, age 40 (Canada)