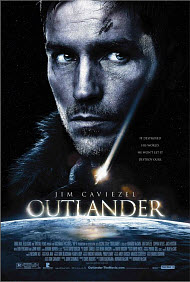 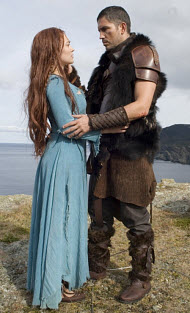 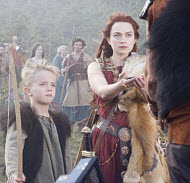 “It destroyed his world. He won’t let it destroy ours.”

The premise of “Outlander” is a familiar one to fans of the Beowulf legend. An outsider comes to a kingdom besieged by a supernatural evil to kill it. In this case, Kainan (James Caviezel) brings the evil himself, crashing his spaceship into a Nordic lake and inadvertently releasing the stow-away monster to terrorize the nearby villages. The movie progresses through the development of character and plot, doing a good job of introducing the love interest, Freya (Sophia Myles), the rival and friend, Wulfric (Jack Huston), and King Rothgar (John Hurt).

The backstory of Kainan’s arrival is that he is a member of an imperializing civilization that invades planets, kills the life on them, and then plants colonies. One of the planets they cleansed was populated by Moorwens, a kind of dragon that is impossibly fast, powerful, and nearly invulnerable.

Unfortunately, one of the Moorwens survives and exterminates the colony of women and children who were left behind by the men as they went on another raiding party. The parallel between the Viking culture and the alien raiding culture is clearly drawn and demonstrates that the desire for revenge on the part of Kainan against the Moorwen, and by Wulfric against Gunnar, are irrational responses to a culture of violence.

Each must reject his past in his own way: Wulfric by changing his character and Kainan by escaping from his culture. How it benefits him to become part of an even more primitive, blood-thirsty civilization is unclear.

Kainan and Wulfric initially clash because Wulfric’s judgment is clouded by his desire for revenge against Gunnar (Ron Pearlman), the leader of a neighboring tribe. At one point Kainan grabs Wulfric by his manhood and tells him he will never rule until he learns “It’s how you rule your head and heart” that matters.

Wulfric represents the element of passion in the movie while Kainan represents reason. A third principle of action is religious as symbolized by the predictable figure of a foolish priest. In a climactic moment that is a clear homage to the naïve priest in “War of the Worlds” (1953), he approaches the Moorwen with an upraised cross chanting a prayer.

Needless to say, the Moorwen kills him on the spot. McCain, perhaps revealing his own animus against Christianity, has the Moorwen snake his tale up the priest’s cassock and impale him through the bottom. It is a prolonged and gratuitous moment of slaughter against a symbolic figure that has become standard fare among filmmakers who wish to make a statement against Christianity. In the 2005 movie, “Beowulf and Grendel,” the priest is a slobbering epileptic who speaks nonsense while the witch is powerful and wise.

One of the problems with the movie is that the Moorwen is so powerful that nothing the men do against it can seem believable. This completely undermined the credibility of the film from the standpoint of an action movie. In the genre, the audience has to believe that the hero is somehow more powerful than his nemesis.

This is the case in the 2007 “Beowulf” as it is not the case in the 2005 “Beowulf and Grendel.” In this movie, there is no question that Kainan is little more than an insect who lives at the Moorwen’s whim. Indeed, their relationship is more like that in John Gardner’s great novel, Grendel, in which Grendel allows Unferth to live in order to torment him with his impotence. Kainan keeps calling to the Moorwen who merely looks at him and does not kill him.

The movie succeeds as an action movie, but where it disappoints as with the 1999, 2005, and 2007 versions of Grendel is in its revisionist European perspective of what constitutes a hero. The Europeans have rejected their Christian past and are busy trying to assimilate into their Islamic future. The past myths of a Christian hero like Beowulf are occasions to express their guilt that there is no evil, only violence, and that there is no absolute good except pacification.

And in the 2008 version, director and writer Howard McCain himself says:

“Personally for that character, it's about a man being reborn and it's about him learning to take responsibility for what some of his actions were in the past. It's kind of an original sin that you find out as the story gets going between him and the monster.” http://www.ugo.com/ugo/html/article/?id=16070&sectionId=2

The Original Sin, in a sense, is Christianity’s. Implicitly, Kainan as Beowulf represents the historical Christian figure. He is the one responsible for murdering a race of creatures and he is the one who brings the evil on the Viking peoples.

This is one of the premises of the academic and lay followers of Neo-Paganism who document the Christianization of the Scandinavian countries as a kind of holocaust. In other words, the myth of Jesus and Satan is responsible for destroying Nordic culture.

In the 2007 version, a character says, “The time of heroes is dead. The Christ God has killed them.” In this film, as in the 2005 version, Christianization is a failure and the Christ-figure, the man from the heavens, is a guilt-ridden killer who must expiate his sins by self-sacrifice.

This is probably why the queen’s name is changed to “Freya,” the name of the Norse goddess of beauty. She symbolizes the union between Kainan and Norse mythology as a rejection of Christianity and its mythos.

But these themes will not be apparent to anyone but scholars and viewers at least can enjoy a moderately heroic figure in the person of Kainan, a beautiful princess, and an engaging, if not entirely, satisfying film. In the pantheon of heroes, this Beowulf falls below “Braveheart,” “Maximus,” and “Rob Roy,” but at least he is not the wimp that Gerard Butler was in the 2005 version.

There is no sexuality and the only vulgarity is an f-word, but it is very violent.

This movie may provide lots of entertainment value, but followers of Christ should be concerned about its promotion of ANCIENT ALIENS theory, because this is an issue deceiving a very great number of people, partly because it is presented as scientific and archaeological (both false claims). This lie is actively being used by godless people to “scientifically” explain away Biblical miracles and events.

This tactic started with atheist author H.P. Lovecraft. Years later, this pseudo-scientific idea was famously promoted by Erich von Däniken (Chariots of the Gods) and others. This idea has particularly been used by some whose worldviews are New Age or Evolutionism/Atheism (or both).

The claim is that extraterrestrials with advanced technology came to Earth in ancient times and were mistaken for gods, angels and supernatural activity—and that out of these encounters with naive and unsophisticated humans (who misunderstood what they witnessed), humans began to worship these aliens—and the world’s religions (including Christianity) are the end result.

I have researched these claims in considerable depth, including attending von Däniken lectures. I am in agreement with many other researchers (both Christian and secular), the so-called evidence for this fantasy is filled with foolish errors and serious outright lies and deceptions.

What difference does it make? When accepted, this pseudo-science leads people directly away from Biblical truth about Earth’s Creation, mankind’s place in God’s plan, Earth’s history of wicked rebellion against the Creator, and the record of His judgments. People are less likely then to open-mindedly consider the Gospel.

If nothing else, the mere CONSTANT REPETITION of this fantasy in entertainment media is causing it to become embedded in the minds of billions of people, making it somehow seem to them far less ludicrous than it really is.

Neutral
Neutral—I felt that there was a lot of poor writing in this movie. It had some good moments, but it kept making ridiculous plot devices that didn't work. One example of bad writing was when Kainan destroyed the homing beacon, his countrymen had come all the way to Earth, had a lock on the target, and you're going to tell me they just fly away and give up the search because he destroys the beacon—without even doing a little search? I found a lot of situations like this in the film, where it was basically bad writing. It was also obvious that the writers had a very anti-Christian slant with making the priest look like a fool and getting killed by the monster.

I was surprised that James Caviezel would be in such a film, since he is such a devout follower of Christ, wasn't he offended by these subtle attacks on his faith? But, what urked me the most was that Kainan's “sins” were wiping out a planet of evil wicked monsters for civilized creatures to inhabit. That's this typical new age liberal mind set that doesn't value human life as unique and special compared to the rest of creation. can you imagine if Kainan felt guilty for wiping out a planet full of the monsters from the movie “Alien”? why on Earth would he feel bad about that? If anything, he should feel good for preparing that world to be used for better use. This world doesn't belong to the animals, they are not equal with humans. We are here to be stewards of them and when necessary it is not unethical, in some cases it is ethical to exercise population control with them. If the writer really wanted us to feel bad about Kainan killing these monsters, he should at least made a couple of them cute and fuzzy. If they really wanted him to be some vile sinner, he should have felt guilty about killing human beings if he had.
My Ratings: Moral rating: Very Offensive / Moviemaking quality: 3
Chris Evans, age 30 (USA)
Negative
Negative—I am a fan of SF and Fantasy movies, so I went in cinema for amusement. Must say that animation is very good but plot is very predictive and puzzled from similar movies so I had feeling like somebody throw down on table pieces of story and gathered them with no order. General idea of “extraterrestrials” is not Biblical but even more I had feeling that Christian religion (therefore Christ) is being mocked by many scenes. First was when Jack Huston said to priest that his God is Odin and not some carpenters son; after this priest is being killed by Moorwen while he was trying to perform exorcism. Beast just disintegrated priest. Hidden massage is: “Jesus followers are funny to evil spirit.” Through all movie we can hear messages about gods and not one God.

Even at the end of the movie main female character is narrating about how “gods sent Kainan (James Caviezel) to help them” hinting astrological sings (demons) through star shining sky perspective. All together to much violent deaths and corpses. Freya (Sophia Myles) also presenting girl who is flying from one flower(man) to another with main wish to earn a man therefore I think message is that man is first thing to a girls heart and not Jesus. “First commandment” What also foxy presenting lust.

And very clear is symbol of the king with satanic sign 666 hidden at the top of medallion as star with three ray star above “dragon.” So dragon represent king (of this world). It is funny that they took James Caviezel to act in this movie. Coincidence? If you want to give a message to movie makers just do not watch this movie. God bless.
My Ratings: Moral rating: Extremely Offensive / Moviemaking quality: 2½
Žarko Blagojevich, age 39 (Croatia)