About The Tree of Life 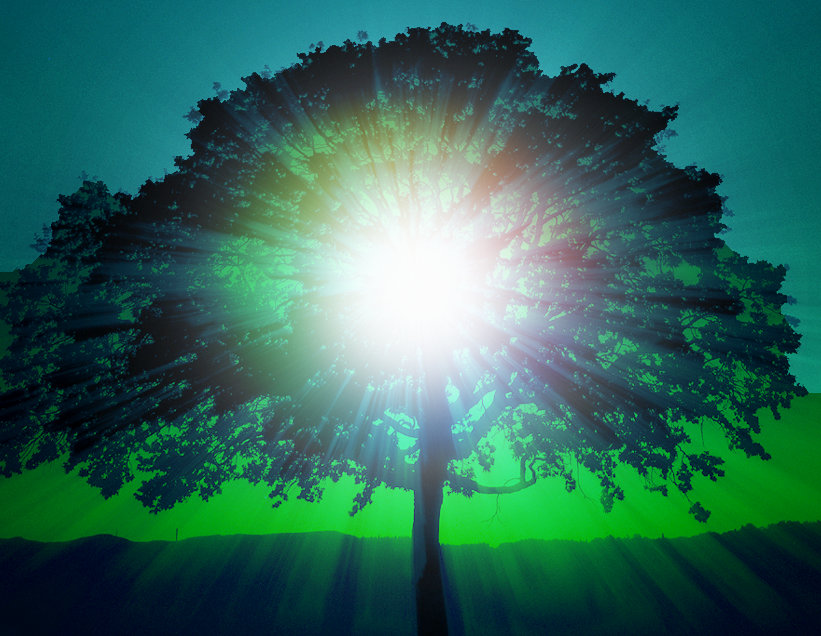 The Tree of Life was created by God in the center of the land of Eden’s special garden and was meant to be a blessing to all mankind.

…The tree of life was also in the midst of the garden… —Genesis 2:9 NKJV excerpt

Just as they ate of many other trees, Adam and Eve likely ate of this tree in the days after Creation and before Satan, in the form of a deceiving serpent, appeared to Eve. Adam’s original sin happened not long after Creation, perhaps weeks or months later.

Why did the tree have angelic guardians?

This tree apparently had great healing and therapeutic properties. After The Fall, the Creator, in His wisdom, placed angels to guard the tree to keep sinful humans from accessing it.

Then the Lord God [Jehovah Elohim] said, “Behold, the man has become like one of Us [the triune God-head], to know good and evil. And now, lest he put out his hand and take also of the tree of life, and eat, and live forever”—therefore the Lord God sent him out of the garden of Eden to till the ground from which he was taken. So He drove out the man; and He placed cherubim at the east of the garden of Eden, and a flaming sword [literally: a sword of flame] which turned every way [literally: whirling], to guard the way to the tree of life. —Genesis 3:22-24 NKJV

The flame of the whirling weapons brandished by these great powerful angels were a continuing vivid and sad reminder of what mankind had so tragically lost due to rebellion against God.

To “keep” (or “guard”) the way of the tree of life, God placed at the east of the garden two cherubim, with a revolving swordlike flame flashing around them like lightning bolts. These creatures, apparently the highest in the angelic hierarchy, are described more fully in Ezekiel 1:4-28; 10:1-22; and Revelation 4:6-8. Satan himself had once been the “anointed cherub” (Ezekiel 28:14) on God’s holy mountain.

The cherubim are always associated closely with the throne of God (note Psalm 18:10; 80:1; 99:1) and it is thus intimated that God’s presence was particularly manifest there at the tree of life. Later, His presence was especially revealed over the mercy seat in the holy of holies in the tabernacle (Exodus 25:17-22; Hebrews 9:3-5), and it is significant that this mercy seat was overshadowed by two golden representations of the cherubim. It was here that once each year the high priest entered with the sacrificial blood of atonement to sprinkle over the mercy seat (see Leviticus 16; Hebrews 9:7-9; 24-28).

By analogy, it may well be that it was here, between the cherubim guarding the way to the tree of life, that God continued at intervals to meet with Adam and those of his descendants who desired to know Him. —Henry M. Morris, The Genesis Record: A Scientific and Devotional Commentary on the Book of Beginnings (Baker Books: 1976)

Morris further comments on the healing nature of The Tree of Life,

The fruit of this tree would, if eaten regularly, have enabled even mortal, dying men to live forever (Genesis 3:22). It is noteworthy that this tree will be growing in profusion in the New Jerusalem (Revelation 22:2), for the “health” of the nations. Exactly how a physical fruit could be of such rich nourishment as to halt the aging process in a human body is not within our limited understanding at this time. A very active field of modern scientific research is gerontology, the study of the phenomena of aging. As yet, gerontologists have no significant scientific understanding of the aging process at all, and therefore no real understanding of what systems of chemicals might be able to stop the process. Since God is the giver of life, He can give it either directly or indirectly, through whatever secondary agency He might choose.

In the absence of any contextual indication that this “tree of life” was a mere symbol of something, and in the current absence of any scientific understanding of what causes aging and death at all, there is no reason not to think of this tree as a literal tree. —Henry M. Morris, The Genesis Record: A Scientific and Devotional Commentary on the Book of Beginnings (Baker Books: 1976)

This was a real tree, with special properties to sustain eternal life. Placed in the center of the garden, it must have been observed by Adam, and its fruit perhaps eaten by him [prior to The Fall], thus sustaining his life (Gen. 2:16). —John MacArthur, Litt.D., D.D., The MacArthur Study Bible

Now what that tells us is that it apparently had special properties to sustain life eternally in the one who ate from it. As long as one ate from that tree, they would live forever. This tree was placed right in the middle of the garden, maybe right at the crown of that mountain of God—if indeed that was there in the garden. It was always readily available from any place, because it was in the very middle. And it was so powerful—listen to this: this tree was so powerful in sustaining life eternally that even after Adam fell and Eve fell, even after they became sinful, mortal dying people, if they had eaten of that tree, they would have continued to live eternally.

…Once they sinned, they had to be removed from it, lest they would live forever in a sinful condition. Better to die and be transformed, right, into an eternally holy condition. … —John F. MacArthur, Litt.D., D.D., “Man in the Garden of God” (Grace Community Church sermon: November 1999)

As long as Adam and Eve ate of the tree they had life, and they had access to the tree because before sin they were in a right relationship with God. While they trusted His wisdom and obeyed His command not to eat of the forbidden fruit, our first parents could eat freely of the tree that gives life (Gen. 2:16–17; 3:22–24). Their trust in God’s promises, signified by their eating of the proper tree and not the forbidden fruit, maintained their place in Eden and consequently, their life of blessedness.

Of course, we know that Adam and Eve failed and they and their descendants were barred from eating the Tree of Life (Gen. 3:24). Cut off from the Lord’s presence and His life-giving tree, their deed plunged all of us into darkness and death, and all people have been trying since that day to find their way back to Eden. —R.C. Sproul, Tabletalk Magazine (Ligonier Ministries)

What happened to The Tree of Life?

Sometime after leaving the Garden, Eve became pregnant and had a series of sons and daughters (most not named in the Scripture), and those children had sons and daughters, and so on. The population of Earth expanded greatly.

With good reason God withheld The Tree of Life from Adam and his descendants. Adam and Eve’s first son was the world’s first murderer, and many other hate-filled people followed in his footsteps. Instead of following God, the vast majority of Adam’s descendants turned to horrible wickedness and perversity—populating a worldwide kingdom of Satan (“the prince of this world”). By the time of Noah's construction of the Ark, about 2-thousand years had passed, and Earth was filled with extremely wicked people (probably numbering in the millions) whose every thought was only evil continually (Genesis 6:5).

The Bible does not specifically state when The Tree of Life disappeared from Earth. Given that it does not, it is reasonable to assume that it probably vanished at the same time the garden in Eden and all of Earth’s was obliterated.

God destroyed the surface of the entire Earth in a catastrophe that involved a deep worldwide flood, vast erosion and laying down of worldwide thick sediments, great earthquakes, and enormous volcanic activity with vast thick lava floods. God destroyed and buried all humans, except 8 (Noah, his wife, his 3 sons and their 3 wives). We are not told whether God took the tree to be with Him or whether He simply allowed it to be destroyed with everything else. The later seems more likely, but not certain. In either case, the protecting angels left. The Garden of Eden was destroyed. Thus, the tree disappeared approximately 2-thousand years after Adam and Eve left the Garden.

Reappearance of The Tree of Life in the New Jerusalem

In the future New Earth (following the Millennium), God’s children will have free access to The Tree of Life (Rev. 22:14). What joys and wonders await us in paradise! The Apostle John was permitted a vision of our future, and it includes this tree,

Then the angel showed me the river of the water of life, bright as crystal, flowing from the throne of God and of the Lamb through the middle of the street of the city; also, on either side of the river, the tree of life with its twelve kinds of fruit, yielding its fruit each month. The leaves of the tree were for the healing [Greek: θεραπεία —transliteration: therapeia] of the nations. —Revelation 22:1-2 ESV

He who has an ear, let him hear what the Spirit says to the churches. To him who overcomes, I will grant to eat of the tree of life which is in the Paradise of God.’ —Rev. 2:7 NASB

Dr. MacArthur sees this real tree in the New Jerusalem as…

A symbol of both eternal life and continual blessing. The tree bears twelve fruits, one for each month, and is symbolic of the abundant variety in heaven. The English word therapeutic comes from the Greek word translated “healing.” The leaves somehow enrich heavenly life, making it full and satisfying. —John MacArthur, Litt.D., D.D., The MacArthur Study Bible

Is this the very same tree that was in the garden of Eden, or a perfect replacement? Although suppositions can be made in favor of either answer, we have no definite knowledge. In His wisdom, God’s Word does not provide a clear answer. Regardless, in either case, the end result for the children of God is the same.

Dr. James Hastings summarizes what our Creator is doing…

Man is driven out of the garden where it [the tree of life] stands, but immediately the education begins which, if he will submit to it, is to bring him back at last to the Paradise of God where the tree of life will be restored to him. And all the training that comes in between is of one sort. Everything from Genesis to Revelation has one purpose—to teach man the hopelessness, the folly, the unsatisfactoriness, of a merely wilful and selfish life; to bring men by every discipline of sorrow or joy to see the nobleness and fruitfulness of obedience and consecration.

When that is learned, then the lost tree reappears. Hidden through all the lingering centuries, there it is, when man is ready for it, blooming in the Paradise of God. —James Hastings, D.D.

King Solomon compared wisdom to The Tree of Life.

Blessed is the one who finds wisdom,
and the one who gets understanding,
…She is a tree of life to those who lay hold of her;
those who hold her fast are called blessed. —Proverbs 3:13-18 ESV excerpt

Hebrew and Greek words for “Tree of Life”