Artist’s depiction of angel with Matthew.

Do good people or babies become angels when they die?

No, angels are not glorified human beings. Matthew 22:30 explains that they do not marry or reproduce like humans, and Hebrews 12:22-23 says that when we get to the heavenly Jerusalem, we will be met by “myriads of angels” and “the spirits of righteous men made perfect”—two separate groups.

DEATH—What is its origin and effects? Answer

Who or what are angels? 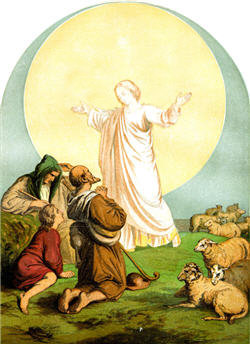 The word “angel” actually comes from the Greek word aggelos, which means “messenger.” The matching Hebrew word mal'ak has the same meaning.

Sometimes, the Bible uses these words for human beings:

Sometimes, it speaks figuratively of things or events as “messengers”…

But it usually describes the whole range of spirits whom God has created, including both good and evil angels, and special categories such as cherubim, seraphim, and the archangel.

Angels are mentioned at least 108 times in the Old Testament and 165 times in the New Testament (Chafer, Systematic Theology, II, 3). Hence, there is ample information available in Scripture to allow us to build a foundation for our knowledge of angelic beings.

“For by Him all things were created, both in the heavens and on earth, visible and invisible, whether thrones or dominions or rulers or authorities—all things have been created by Him and for Him. And He is before all things, and in Him all things hold together.”

The time of their creation is never definitely specified, but it is most probable that it occurred in connection with the creation of the heavens in Genesis 1:1. It may be that God created the angels immediately after He had created the heavens and before He created the Earth—for according to Job 38:4-7, “the sons of God shouted for joy” when He laid the foundations of the Earth.

How many angels are there?

While the Scriptures give no definite figures, we are told that the number of angels is very great (Matthew 26:53—“legions”; Daniel 7:10—“thousand thousands” (millions); Hebrews 12:22—“innumerable”).

It appears that all angels were created at one time. No new angels are being added to the number. Angels are not subject to death or any form of extinction (Luke 20:36); therefore they do not decrease in number.

It seems reasonable to conclude that there are at least as many spirit beings in existence as there will have been human beings in all their history on Earth.

Do angels have bodies? 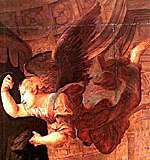 Angels are essentially “ministering spirits” (Hebrews 1:14) and do not have physical bodies like humans. Jesus declared that “a spirit hath not flesh and bones, as ye see me have” (Luke 24:37-39).

The Bible does, however, make it clear that angels can only be in one place at a time. They must have some localized presence.

Angels can take on the appearance of men when the occasion demands. How else could “some have entertained angels without knowing it” (Hebrews 13:2)? On the other hand, their appearance is sometimes in dazzling white and blazing glory.

And behold, there was a great earthquake, for an angel of the Lord descended from heaven and came and rolled away the stone and sat upon it. And his appearance was like lightning, and his clothing as white as snow. And the guards quaked from fear of him and became like dead men. —Matthew 28:2-4 LSB

Since angels are spirits rather than physical beings, they don’t have to be visible at all (Colossians 1:16). Elisha once prayed that his servant would see the armies of angels surrounding the city, and the young man discovered that he had overlooked a lot of invisible beings!

Then Elisha prayed and said, “O Lord, I pray, open his eyes that he may see.” And the Lord opened the servant’s eyes and he saw; and behold, the mountain was full of horses and chariots of fire all around Elisha. —2 Kings 6:17

When angels do appear, they generally appear in the form of men. In Genesis 18, Abraham welcomed three heavenly guests who appeared at first to be nothing more than some travellers. In the following chapter, two angels went to Sodom where they were assumed to be simply a pair of human visitors.

With the possible exception of one debatable passage in Zechariah 5:9, angels always appear as males rather than females (Mark 16:5).

Sometimes an angel appears to be a man with unusual features. Daniel saw an angel with arms and legs resembling polished metal and precious stones, and a face like lightning (Daniel 10:5-6). The angel that rolled back the stone from Christ’s tomb was radiating dazzling light (Matthew 28:3; Luke 24:4). The book of Revelation describes some highly unusual beings who may be a variety of angel.

…And in the center and around the throne, four living creatures full of eyes in front and behind. And the first creature was like a lion, and the second creature like a calf, and the third creature had a face like that of a man, and the fourth creature was like a flying eagle. And the four living creatures, each one of them having six wings, are full of eyes around and within, and day and night they do not cease to say,

No Biblical angels ever appeared this way.

Angels in the Bible never appear as cute, chubby infants! They are always full-grown adults. When people in the Bible saw an angel, their typical response was to fall on their faces in fear and awe, not to reach out and tickle an adorable baby.

Do real angels have wings?

Most angels do not have wings, however some special angels called seraphim do.

“Holy, Holy, Holy, is the Lord of armies.
The whole earth is full of His glory.”

Other verses talk about angels flying, and people have assumed that the wings would be useful for that flight.

yes, while I was speaking in prayer, the man Gabriel, whom I had seen in the vision at the beginning, being caused to fly swiftly, reached me about the time of the evening offering. —Daniel 9:21 NKJV

while I was still speaking in prayer, the man Gabriel, whom I had seen in the vision previously, came to me in my extreme weariness about the time of the evening offering. —Daniel 9:21 NASB

I suspect that angels can move around without having to depend on wings. 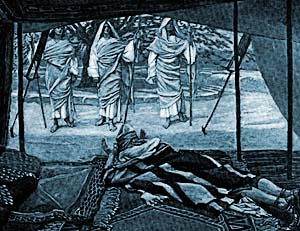 Most references to angels in the Bible say nothing about wings, and in passages like Genesis 18-19 (below), it is certain that no wings were visible.

Now the Lord appeared to Abraham by the oaks of Mamre, while he was sitting at the tent door in the heat of the day. When he raised his eyes and looked, behold, three men were standing opposite him; and when he saw them, he ran from the tent door to meet them and bowed down to the ground,

…Then the men rose up from there, and looked down toward Sodom; and Abraham was walking with them to send them off.

…Then the men turned away from there and went toward Sodom, while Abraham was still standing before the Lord.

…Now the two angels came to Sodom in the evening as Lot was sitting at the gate of Sodom. When Lot saw them, he stood up to meet them and bowed down with his face to the ground.

…the men of Sodom—surrounded the house, both young and old, all the people from every quarter; and they called to Lot and said to him, “Where are the men who came to you tonight? Bring them out to us that we may have relations with them [have intercourse].”

…But the men [angels] reached out their hands and brought Lot into the house with them, and shut the door. Then they struck the men who were at the doorway of the house with blindness, from the small to the great, so that they became weary of trying to find the doorway.

…When morning dawned, the angels urged Lot, saying, “Up, take your wife and your two daughters who are here, or you will be swept away in the punishment of the city.” —Genesis 18-19 NASB excerpts

How do angels compare to human beings? 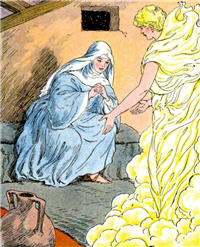 Editor’s Note: The Creator gave Adam and Eve, and their descendants, the wondrous ability to reproduce—ultimately creating billions of new eternal souls. In his wisdom, the ability to reproduce was withheld from angels. One might guess that this may have enraged prideful Lucifer, who led a great many angels (perhaps one third—if “stars” equals “angels” in Rev. 12:4) into rebellion against God and devoted to the deceit and destruction of mankind—rather than being encouragers, ministers and protectors to humanity (the role that God chose for them). (See: “Demons”)

Are all angels good?

Sorry! You can’t trust every angel.

There is actually a great unseen conflict raging that goes beyond anything we can imagine. It is not, however, a fight between two equal and eternal forces. God who created all beings is still in charge, and once He has used wicked angels to accomplish His purposes, He will bring them to a final defeat.

What is the job description of an angel?

We don’t know whether every angel carries out the same tasks, or whether some of them specialize in certain areas. The Bible does speak about classes of angelic beings like cherubim (Ezekiel 1) and seraphim (Isaiah 6). We also know the names of two notable angels: Michael (Daniel 10:13; Jude 9) and Gabriel (Daniel 9:21; Luke 1:19; 1:26).

Who is the King of the angels?

Jesus the Christ, God incarnate, is above all angels and is the King of the angels, as explained by the author of Hebrews.

God, having spoken long ago to the fathers in the prophets in many portions and in many ways, in these last days spoke to us in His Son, whom He appointed heir of all things, through whom also He made the worlds, who is the radiance of His glory and the exact representation of His nature, and upholds all things by the word of His power; who, having accomplished cleansing for sins, sat down at the right hand of the Majesty on high, having become so much better than the angels, as He has inherited a more excellent name than they.

For to which of the angels did He ever say,
“You are My Son,
Today I have begotten You”?

And again,
“I will be a Father to Him
And He shall be a Son to Me”?

And when He again brings the firstborn into the world, He says,
“And let all the angels of God worship Him.”

And of the angels He says,
“Who makes His angels winds,
And His ministers flaming fire.”

But of the Son He says,
“Your throne, O God, is forever and ever,
And the scepter of uprightness is the scepter of Your kingdom.
You have loved righteousness and hated lawlessness;
Therefore God, Your God, has anointed You
With the oil of gladness above Your companions.”
And,

“You, Lord, in the beginning founded the earth,
And the heavens are the works of Your hands;
They will perish, but You remain;
And they all will wear out like a garment,
And like a mantle You will roll them up;
Like a garment they will also be changed.
But You are the same,
And Your years will not come to an end.”

But to which of the angels has He ever said,
“Sit at My right hand,
Until I put Your enemies
As a footstool for Your feet”?

Are they not all ministering spirits, sent to render service for the sake of those who will inherit salvation? —Hebrews 1 LSB 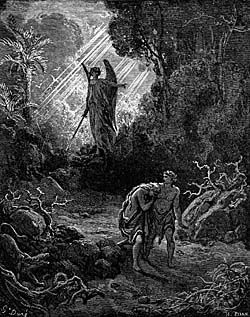 Artist’s conception of an angel who guarded the Tree of Life when Adam and Eve were expelled from the Garden of Eden. The Biblical text does not indicate that this angel had wings, but it does say it was a cherubim (Genesis 3:24).

Copyright © 1996, 1998, 2002, 2017, 2021, Christian Ansdwers, All Rights Reserved—except as noted on attached “Usage and Copyright” page that grants ChristianAnswers.Net users generous rights for putting this page to work in their homes, personal witnessing, churches and schools.