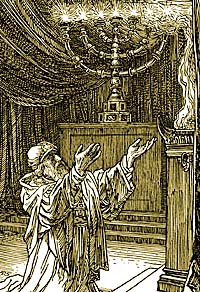 Who and what are…
high priests

Aaron wore a special clothing, which on his death passed to his successor in office (Exodus 29:29-30). Besides those garments which he wore in common with all priests, there were 4 that were unique to himself as high priest:

Only the high priest was permitted to enter the holy of holies, which he did only once a year, on the great Day of Atonement, for “the way into the holiest of all was not yet made manifest” (Hebrews 9; 10). Wearing his gorgeous priestly vestments, he entered the temple before all the people, and then, laying them aside and assuming only his linen garments in secret, he entered the Holy of Holies alone, and made expiation, sprinkling the blood of the sin offering on the mercy seat, and offering up incense. Then resuming his splendid robes, he reappeared before the people (Leviticus 16). Thus, the wearing of these robes came to be identified with the Day of Atonement.

At its first institution, the office of high priest was held for life (but compare 1 Kings 2:27), and was hereditary in the family of Aaron (Numbers 3:10). The office continued in the line of Eleazar, Aaron’s eldest son, for 296 years, when it passed to Eli, the first of the line of Ithamar, who was the 4th son of Aaron.

After him the succession was changed from time to time under priestly or political influences.

High Priests of the Bible

It is supposed that there were in all 83 high priests, beginning with Aaron (1,657 B.C.) and ending with Phannias ben Samuel (70 A.D.). The later died when Rome destroyed Herod’s Temple and all of Jerusalem.

After His death, resurrection and ascension into Heavn, Christ became our Great High Priest. The Old Testament covenant was done away with—replaced by the new and better covenant foretold in the Old Testament and fulfilled in the New Testament.

“…we have a great high priest who has passed through the heavens, Jesus, the Son of God” —Hebrews 4:14

“…Jesus has become the guarantee of a better covenant.

The former priests, on the one hand, existed in greater numbers because they were prevented by death from continuing, but Jesus, on the other hand, because He continues forever, holds His priesthood permanently. Therefore He is able also to save forever those who draw near to God through Him, since He always lives to make intercession for them.

For it was fitting for us to have such a high priest, holy, innocent, undefiled, separated from sinners and exalted above the heavens; who does not need daily, like those high priests, to offer up sacrifices, first for His own sins and then for the sins of the people, because this He did once for all when He offered up Himself. For the Law appoints men as high priests who are weak, but the word of the oath, which came after the Law, appoints a Son, made perfect forever.” —Hebrews 7:22b-28 NASB

“and not through the blood of goats and calves, but through His own blood, He entered the holy place once for all, having obtained eternal redemption.” —Hebrews 9:12 NASB