Ark of the Covenant, lost or found? 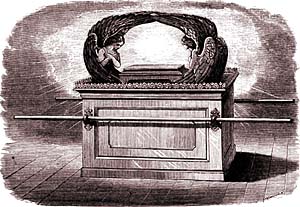 Artist’s impression of the Biblical Ark of the Covenant

Long pondered by the community of Biblical scholarship, the rest of the world began considering this question with the release of the hit motion picture “Raiders of the Lost Ark.” Today there are no lack of possibilities.

Based on ancient Jewish writings, some have suggested the Ark is hidden on Mount Nebo on the Jordan River's east bank. This site is presently in the modern nation of Jordan with no hint of the Ark's presence.

Others suggest the Ark is hidden somewhere near the Dead Sea, on the Jordan's west bank. This location is usually considered in association with the ancient site of Qumran and the people of the Dead Sea Scrolls. Here, the Ark and other artifacts are believed buried in one of the region's caves, like the Dead Sea Scrolls.

Another view suggests the Ark is located beneath Jerusalem, in a stone-carved tunnel. Some say it is beneath the suggested site of the Crucifixion, Gordon's Calvary. The Temple Institute in Jerusalem's Old City, an Ultra-Orthodox organization dedicated to rebuilding the Jewish Temple, says the Ark is under the temple mount and will be revealed at the proper time—when the temple is rebuilt.

Interestingly, the thesis of the “Raiders of the Lost Ark,” that the Ark was taken from the Temple by Egyptian Pharaoh Shishak is not a popular view today. This may be due to the lack of traditions suggesting the Ark's presence at the mouth of the Nile, in Lower Egypt.

A view which has received little attention until the past decade has now been popularized by a recent book. The Sign and the Seal: The Quest for the Lost Ark of the Covenant, by British journalist Graham Hancock, has almost reached best-seller status and captured the imagination of the general public. According to this view, the Ark of the Covenant was taken from ancient Jerusalem in the days of King Solomon. While there are numerous variations of the story, the common thread centers on a son fathered by Israelite King Solomon and born to the Queen of Sheba. While this union is not mentioned in the Biblical account of the meeting between these two monarchs (1 Kings 10), it has a long tradition in Ethiopia, a suggested location of ancient Sheba.

This son, named Menelik, is said to have brought the Ark to his country for safe keeping, according to an account preserved in the Ethiopian royal chronicles. This story has also been boosted by the now famous Black Jews of Ethiopia, the Falashas. These black Africans, practicing a very ancient form of Judaism, received international attention when an Israeli military action airlifted them to freedom from political persecution in 1976.

The Associates for Biblical Research have not been involved in any efforts to retrieve the Ark. Obviously, it would be one of the greatest artifacts of all time. But archaeology is not a treasure hunt, and the Bible does not need the recovered Ark to be proved accurate.